Elisabeth Sabaditsch-Wolff is currently sitting in the plenary in Vienna, attending the confab about “Confronting Intolerance and Discrimination against Muslims in Public Discourse”.

She is also pretty much a lone voice in the wilderness that is public discourse in Austria when it comes to going against the current view, and seated with mainly men and mainly muslim ones at that when her views and travails are so widely known has to be challenging.

But… she is nothing if not brave, and more than capable of speaking up if she deems it fit.

I’ve offered to do a bit of a liveblog for her since she can’t be here doing it herself (one of the bonuses of global timezones, I guess).

Well, off to a flying start with the first speech being somewhat uninspiring (direct quote:”[7:16:29 PM] this is terrible”)

Update 1: the conference is to be based upon a forward-looking approach, with recommendations to require work of all stakeholders. Intolerance and discrimination can be overcome only with the co-operation of everyone, and of course, intolerance of islam goes hand in hand with racism.

It is fueled by stereotypes and prejudices, including the identification of terrorism with islam.

It is these sorts of biased views that led to “recent events” in a very tolerant country, and therefore intolerant speech should be avoided because words can do harm.

Finding a fair balance is hard.

Is freedom of expression absolute? When is it necessary to restrict it?

International standards do not provide answers.

The criminalisation of hate speech is a threat and can impede robust debate in a robust society.

OSCE stresses the protection and promotion of freedom of expression, stresses the role of education in shaping the attitude of young minds. Educators must combat these stereotypes.
[yup. get them while they’re young and malleable…nilk]

Update 2: Mr. Omer Orhun, advisor to the Secretary General of the OIC is the next speaker.

[first speaker] identifies intolerance as a problem, what to do to confront instances of this?

There are two points in the field of public discourse:

Political rhetoric – responsible politicians must underline the importance of correct and unbiased discourse.

The media – a positive role in promoting harmony; what is expected of responsible journalists? Media can play a negative and divisive role in projecting messages, and governments must assist the creation of media self-regulation [not very self-regulating in that case, is it?..nilk]

The manifestation of islamophobia in Western Europe and Northern America has the potential to fuel anti-muslim incidents and violence.

The role of the media in preventing hate crimes needs to be explored.

Underlining by the OIC: Respect for cultural diversity.

Differences should not lead to discrimination.

Principles of tolerance lie at the centre of the human rights system. Closely linked to mutual respect, which is based equality and dignity.

Update 3: (same speaker)
Regard for principles of tolerance, democracy, are essential safeguards of tolerance and non-discrimination [apologies for the redundancy ~ just cribbing from skype here..nilk]

More and more people believe that a clash of civilisations is inevitable, and this attitude threatens the international environment.

Mankind must join forces to resist playing one culture against another[umma anyone?..nilk]

With respect to islamophobia, OSCE prefers “intolerance and discrimination against muslims,” but we need a definition.

It is a contemporary form of racism, an unfounded fear of muslims and islam and is an affront to the human rights and dignity of muslims.

Just in time for a break before the first session. 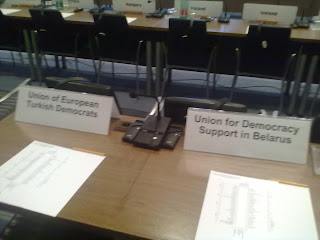 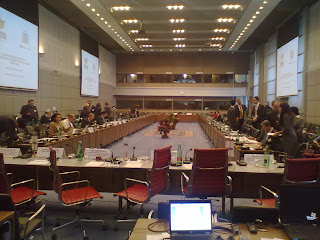 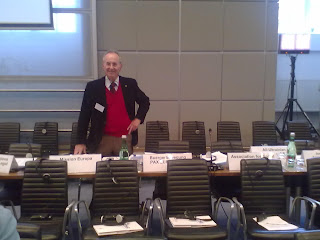 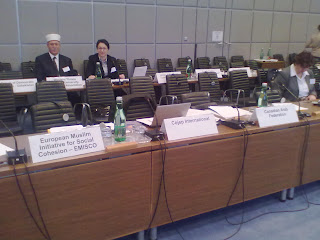