The Girls Aloud singer has just returned from visiting British army members at Camp Bastion, where she took part in a mock battle and enjoyed a ride in a Sea King helicopter.

During her visit Cheryl praised the work of troops, telling the Daily Mirror: ‘I always had admiration for what the guys do out here, but seeing them here at work is awe-inspiring.

‘I’m delighted to be here to recognise all the hard work they do. Every one of them is a hero in my book.’

But while the former X Factor judge proved to be a hit among the armed forces, Islamic extremists have warned the high-profile visit has made Cheryl a target for terrorists.

Extremist cleric Choudary – who earlier this month led anti-American protests during the minute’s silence for 9/11 victims in London – said she would ‘only have herself to blame’ if she was killed. 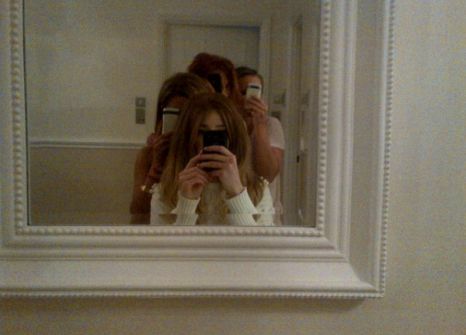 Cheryl Cole has brushed aside the threats by enjoying a Girls Aloud reunion (Picture: @nicolaroberts/@cherylcole/Twitter)

He said: ‘I find it completely outrageous that Cheryl Cole can go to Afghanistan and start praising the soldiers when thousands of innocent men, women and children are being slaughtered by the Americans and their allies.

‘She has put herself in great danger by being such a high-profile visitor to the region. She will only have herself to blame for the repercussions on her.’

‘High-profile figures are not beyond the reach of al-Qaeda and the mujahideen.’

Cheryl has not commented on the threats, but yesterday seemed unconcerned by the reports as she enjoyed a mini Girls Aloud reunion with Sarah Harding, Nicola Roberts and Kimberley Walsh.

While Nadine Coyle was unable to attend, the rest of the girls posed for a Twitter photo together with Cheryl writing: ‘Love my girlies <3’