Shirl from Oz sent me a link to video of these babies. The good news is, people with an education and appreciation for excellence flatly rejected and called the BDS primitives out and flatly rejected what they were doing. Thanks Shirl. Here is the description from the page where the video lives.

“The Audience at the Royal Albert Hall express their disgust as anti-Israel yobs disrupt Prom 62 featuring the Israel Philharmonic Orchestra.

The mood in the hall was one of total disapproval of these idiots ruining everyone else’s evening.

The IPO was given a huge standing ovation at the end, and the love in the room for them was immense.” 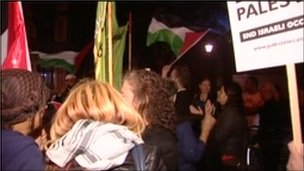 Protesters have disrupted a BBC Proms concert by the Israel Philharmonic Orchestra at the Royal Albert Hall in London.

The soloist, Gil Shaham, was about to play Bruch’s violin concerto conducted by Zubin Mehta when some people in the audience began booing and shouting.

The Palestine Solidarity Campaign had earlier called on people to boycott the concert and urged the BBC to cancel it.

The pro-Palestinian group claimed that the IPO showed “complicity in whitewashing Israel’s persistent violations of international law and human rights”.

The BBC Proms Team tweeted: “We’re sorry that the concert was taken off air following hall disturbance. Glad both pieces were heard by the audience in the RAH.”

It later added: “We regret that as a result of sustained audience disturbance tonight’s concert was taken off BBC Radio 3.”

The performance was interrupted at about 19:45 BST and coverage was cut off again an hour later after more protests.

The BBC’s Tom Symonds, who is outside the concert hall, described what happened.

“As Zubin Mehta stood up and began each piece a small group of protesters each time tried to stop the music,” he said.

“They sang, they shouted, they were met by boos by the audience and they had to be removed by the security staff.”

Our correspondent said he thought it was the first time a BBC Radio 3 live broadcast had been taken off the air because of a protest.

Outside the concert hall a group of about 20 campaigners waved banners and sang songs in protest against the appearance of the Israel Philharmonic Orchestra (IPO).

Several pro-Israeli groups met them with their own protest outside, our correspondent said.

He said it had been a “pretty disruptive” but the orchestra was said to have “taken it all in their stride and had smiles on their faces”.

There had been increased security measures for the concert, including bag searches and a heightened police presence.

Police said there had been no arrests but there were heated exchanges between not only supporters of both political sides but concert-goers angry at the disruption to their evening.

Were you at the concert? Did you witness the disturbance? Send us your comments and experiences using the form below.