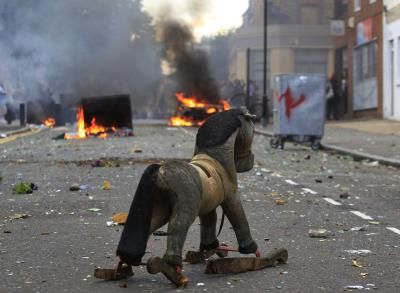 A toy left by a protester is backdropped by a burning car and garbage bins set on fire by rioters in Hackney, east London, Monday Aug. 8, 2011. A chaotic wave of violence and looting raged across London and spread to three other major British cities on Tuesday, as authorities struggled to contain the country’s worst unrest since race riots set the capital ablaze in the 1980s. (AP Photo/Lefteris Pitarakis)