Our host has taken the site down due to  constant overloads, which caused other sites to crash. We were running out of bandwidth!   Its nice to be popular, and we appreciate the increasing interest from our regular readers and the wider community. 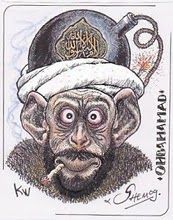 Thanks to Vlad I’ll be posting here until Winds of Jihad is back up. I was told it could be up to 24 hours to be back online.

We will do whatever it takes to bring the counter-jihad to the worldwide community of infidels,  because we must. We cannot afford to lose this war against the global jihad, a war which was declared on us in the 7th century, not the other way around.

Islam has destroyed many cultures and civilizations because people were deceived into believing that a peaceful coexistence is possible. The depredations of dhimmitude and chastened subservience however make that impossible. Islam seeks domination by all and any means and does not grant Christians, Jews, Buddhists or Hindus equal rights, they are unbelievers who must be forcibly converted or killed. This is now self-evident in all the lands where Muslims have the upper hand.

To give in  to their demands would dishonor our ancestors who fought valiantly to keep our countries free of the Islamic scourge. Our children will never forgive us for being such cowards in the face of such an implacable enemy.

You must remember that it is not our words, but the silence about the dangers of Islam which has the most negative influence on our societies. Feeding the crocodile will not keep us safe, and the appeasers will follow the quislings down the memory hole.

Unfortunately, due to our popularity, we now have to pay a whole lot more to get our message out. I hope that those of you who appreciate what we’re doing will chip in to keep us going. So far we never had a fundraiser,  but every little bit helps. Yes, we do take credit cards and we do have a PayPal account.

FYI: We also have an emergency site, called Moe’s Jihad News, where I will post the most relevant updates while the main site is down.

In closing, I’ll post the most cheerful message I have seen for a long time, from the most courageous freedom fighter I ever had the pleasure to call my friend, Robert Spencer:

Victory is in sight

All we have is the truth. And that means that victory is assured.

8 Replies to “Sheik yer’mami down but not out!”