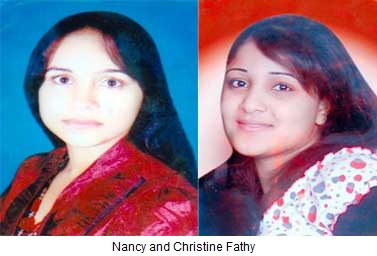 (AINA) — Parents and lawyers of Christian teens Nancy Fathy and her cousin Christine Fathy, who allegedly converted to Islam, were shocked to learn the two girls have been taken by security officers from the care home where they were entrusted by the attorney general and held in a undisclosed place without knowledge or consent of the attorney general.

Today, lawyers with the parents went to south Cairo general prosecutor and were told by him the teens are in a safe place with public security, as they were afraid the parents may go to the orphanage and create problems there, according to Mourad. “Still we were not told where they are staying.”

According to attorney Dr Naguib Gabriel, President of the Egyptian Union Organization of Human Rights, who is also one of the lawyers representing the parents of the Christian girls, the girls were moved to another place because of the threats of violence issued by the unlawful Muslim group calling itself “Alliance for the Support of New Female Muslims.”

“It may be the Muslims knew the whereabouts of the two girls, and they were moved to the safer place,” said Gabriel. He said he contacted Mrs. Lamia Mohsen, head of the Childhood and Motherhood Council and she also had no knowledge that Christine and Nancy were moved from their care home.

Both 14-year-old Nancy Magdy Fathy, and her 16-year old cousin Christine Ezzat Fathy, disappeared while on their way to church on Sunday June 12. Their parents accused two Muslim brothers from a neighboring village of abducting them. Two weeks later, the girls appeared in Cairo and surrendered themselves at a Cairo police station. The Christian minors said they converted to Islam of their own free will, and refused to return to their families, and even applied for protection from them. The prosecution decided to put them in a state care home and provide protection for them, until the completion of the investigation. Al Azhar denied that the two Coptic teenagers had converted to Islam, because they are still minors and have not yet reached 18 years of age, as is required by law (AINA 6-26-2011).

Investigation of their case was transferred to child prosecution at the south Cairo court as they are still minors. The prosecutor ordered reconciliation sessions between Nancy and Christine and their parents in the presence of a social worker from the Childhood and Motherhood Council. Three sessions were held, only one of which was attended by the parents.

Gabriel stressed that “none of the girls said she converted to Islam. During the meeting with their parents the younger threw herself in the arms of her father, sobbing while the older girl said she was afraid to return home, the matter is not conversion to Islam at all, they are just afraid of family retribution”

He said the lawyers went with the parents yesterday to south Cairo prosecution for child care and met with the committee of the Childhood Council, which is comprised of two social workers and two psychiatrists. “The committee wrote conflicting reports. It reported the girls are psychologically disturbed and cannot control their behavior and then it said one of the girls talked of her preparedness to convert to Islam.” He said they objected to the formation of the committee and demanded Christian representation in it. “Even the two social workers wore the Hijab,” he explained. They also demanded that the care home would be a neutral one or at least its administration would include a Christian.

He said he would be meeting Dr. Lamia, of the Childhood Council, to discuss the timeline foreseen for the intended return of the children to their parents and the schedule of the psychiatric rehabilitation. “The main danger for the girls is being kept away from their parents and not by lodging them in a care home.”

He said they demanded that there should be guarantees not to deliver the children to Muslims, or Muslim Brotherhood members, or leave the control over the girls to them, stressing that such requests were approved. “However, we were greatly surprised that after the approval of our demands, the two girls suddenly disappeared from the care home.”

Yesterday in Minya the Court of Appeals released until further evidence appears Gomaa Sayed Gomaa and his brother Arafat, the Muslim men accused of being behind the abduction of Christine and Nancy and taking them to Alexandria and Cairo. “This is a very serious matter, as investigations are still going on and the virginity exam has not yet been carried out on the minors, which is a part of the criminal investigations. Depending on the results, charges in this case would be raping of a minor or minors,” Gabriel said.