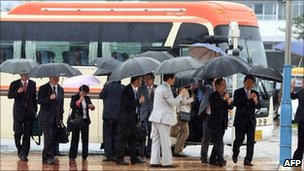 North Korea has threatened to launch “a retaliatory sacred war” against its southern neighbour, as the two countries prepare to meet for talks.

Government and business representatives from South Korea are due to meet North Korean officials at the tourist site of Mount Kumgang.

The immediate aim is to discuss stalled tourism operations there.

Relations between the two countries have deteriorated since two fatal attacks on South Korea last year.

The tourist resort at Mount Kumgang, which was run by a South Korean company, has been suspended since a South Korean tourist was shot dead near the site three years ago.

North Korea, which is believed to be struggling economically, said recently it would seize South Korean assets at the resort if operations did not resume.

North Korea has issued both an invitation and a threat to South Korea.

The invitation was to come and talk about a joint tourism project at Mount Kumgang in the North, which has been stalled since a dispute erupted three years ago.

South Korea sent a group of government officials and business people across the demarcation line between the two countries on Wednesday, to meet North Korean representatives and hear what they had to say.

As the talks were to begin, North Korean state media published comments from an unnamed spokesman, accusing soldiers in the South of using slogans that slandered North Korea’s army and dignity.

These actions, it said, were “little short of a declaration of war”.

A series of incidents recently have prompted similar rhetoric from the North, including the discovery that some South Korean army reserve units were using pictures of North Korea’s ruling family as target practice.

More at the BBC