A few well worded questions should knock the wind out of the sails of any of these door to door leafle guys. For instance, “Do you believe people who leave Islam should be killed” ought to put a fast end to this trick. 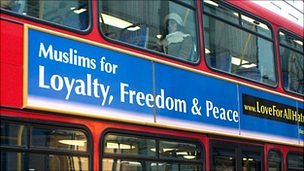 The adverts aim to improve the public perception of Islam

An advertising campaign to tackle Islamophobia has been unveiled on buses across the UK.

Vehicles in several cities will carry the message “Muslims for loyalty, peace and freedom” in an attempt to challenge negative stereotypes of the faith.

The Ahmadiyya Muslim Association, the group behind the campaign, said it hoped it would educate people about Islam and remove misconceptions.

But some Muslim groups have criticised the campaign as “unrealistic”.

The campaign, which began on 26 March, will see almost 100 buses in London and 60 in Glasgow display the poster for four to eight weeks.

It will then be rolled out to other cities including Leicester, Birmingham, Leeds and Bradford over the next six months.

Volunteers will also distribute leaflets door-to-door throughout the UK explaining the peaceful and positive principles of the faith.

”Through this campaign we are trying to clarify the true teachings of Islam, to speak out against injustices, suicide bombings and terrorism,” said Rafiq Hayat, the Ahmadiyya Muslim Association’s national president.

Islamophobia has been seen by some to be an increasing problem in the UK.

Through this campaign we are trying to clarify the true teachings of Islam, to speak out against injustices, suicide bombings and terrorism”

Last year, an online YouGov poll of 2,152 adults commissioned by the the Exploring Islam Foundation, found that 58% of those questioned linked Islam with extremism, while 69% believed it encouraged the repression of women.

In a recent speech, Baroness Warsi, co-chairman of the Conservative party, said anti-Muslim prejudice had passed the “dinner table test” to become uncontroversial and socially acceptable by Britons.

Rafiq Hayat said Islam was a religion of peace and should not be hijacked by a minority of extremists.

“As Muslims it pains us when our religion is tarnished by the actions of a minority of people who promote violence and hatred,” he said.

”Terror offences committed by a small number of Muslims should not be used to condemn all who follow Islam.

”Islam means peace and we want to convey the real message of the religion to the people of this country,” he said. 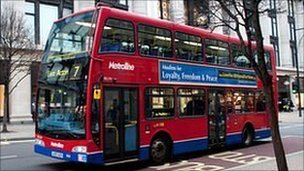 The adverts will be visible on buses across the UK
But there was scepticism within the Muslim community of the campaign’s effectiveness.

Massoud Shadjareh, chair of the Islamic Human Rights Commission, which monitors Islamophobia, said it had a great deal of evidence showing it was increasing.

He said he was doubtful whether the campaign would change negative perceptions.

”There is nothing wrong with doing something like this, but the reality is that you can’t just make people think differently,” he said.

”No-one on the street is going to look at the message on the buses and say ‘oh is that right, from now on I’m not going to stereotype Muslims’. This is very unrealistic.”

But the Ahmadiyya Muslim Association remained confident it would be a small but positive step forwards.

“Shouting slogans is never going to be enough in itself,” said Naseer Dean, president of the association’s London branch.

”But what it will do is start a debate, a conversation, that perhaps is not being had at the moment, and it is right for the Muslim community to instigate this, because they are the ones primarily being affected.”

You can listen to Asian Network Reports on BBC Asian Network, Tuesday 4th April 2011, at 1230 and 1800 BST, and afterwards on BBC iPlayer.

14 Replies to “This should be a good laugh. Anti-‘Islamophobia’ campaign in the UK”