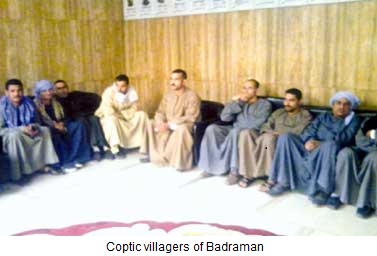 Cairo (AINA) — Ten human rights organization staged a rally on March 30 in front of the building of the Attorney General to bring to public attention the tragedy of some nine thousand Coptic villagers living in terror since end January in the Upper Egyptian villages of Badraman and Nazlet Badraman in Deir Mawas, Minya. Rights activists and Badraman villagers were joined by attorney activist Peter elNaggar, who filed a complaint with the Attorney General against 34-year-old Muslim police informer Ali Hussein, nicknamed “Holaku” after the ruthless Mongol leader.

Hussein was accused of terrorizing the Copts, raping their wives, kidnapping their children for ransom and extortion. Attorney elNaggar said that I f proven these charges are punishable by the death penalty.

Security forces were informed last January of the incidents in both villages, “but they just turned a blind eye,” said Coptic activist Nader Shoukry, who publicized the story last week after registering all crimes against the Coptic villagers.

The terror started on January 28, when Ali Hussein assaulted Copt Khalil Suweiha and his family. Mr. Suweiha filed a report with the police in Deir Mawas but was forced to drop the charges after being threatened with death by Hussein and his 200-man armed gang.

Hussein then started ?extorting money from Copts and attacking their homes. They all had to withdraw the police reports they filed against him after being threatened.

On January 29, Hussein, broke into the house of another Copt (his name is withheld), raped his wife and mother after being restrained by Hussein’s men. He was too frightened to report the crime to the police after being threatened that his children would be killed, according to activist Mariam Ragy.

Alaa Yusuf Iskandar, 30, was kidnapped and his family paid a ransom of 200,000 Egyptian pounds to Hussein to set him free. Although the family reported the kidnapping to the police, no action was taken.

Hanna Samuel had his 12-year old son kidnapped on March 8; the well to do Coptic family paid a ransom of nearly 500,000 Egyptian pounds to free their child.

According to Shoukry, “Ali Hussein has set himself up as governor of the two villages despite the presence of two village mayors. He is practicing injustice and tyranny only against the Copts in the villages. He walks between Christian homes, carrying a weapon on his shoulder, followed by his brothers and cousins and more than fifty armed thugs from outside the villages.” He added that Hussein and his gang declared that they are the government of the Copts. The incidents of extortion, looting, crop destruction and kidnapping children for ransom have become so prevalent many families have left the villages as they have no more money to give him. “His despotism and tyranny reached the extent of imposing a curfew on the Copts from six o’clock in the evening to seven o’clock in the morning. Any Copt daring to break the curfew is beaten up and terrorized,” Shoukry said.

On Saturday April 2, Ali Hussein forced twenty three Coptic villagers to go with him to Cairo to the offices of the Attorney General to withdraw their complaints against him, which they had filed on March 30. He detained their children to make sure they would follow his orders. When they arrived in Cairo the offices of the Attorney General were closed, so Hussein brought the Copts to several newspapers to say the Copts and Muslims live in harmony on Badraman. Only the semi-official newspaper Al-Ahram published his story.

On Sunday morning police and army forces stormed the village to arrest Hussein and his gang, but he was tipped off and he and most of his gang fled beforehand. Only a few members of his gang were arrested. The police stayed only three hours in the villages before withdrawing, leaving the Coptic villagers again at the mercy of a furious Ali Hussein.

Since Monday Hussein has been assaulting the Copts in the villages to force the army to release the members of his gang that were arrested on Sunday.

Today the villagers appealed to Field Marshal Mohammed Tantawi to urgently rescue them from the oppression of Ali Hussein, who is holding them as hostages in the village until the release of his men.

Another rally is to be staged on April 6 by the villagers of Badraman, joined by human rights organizations, in front of the offices of the Attorney General in Cairo. After the rally the villagers will meet with the Attorney General to submit a report about the latest incidents and to demand quick action to save them from the oppression they are presently suffering at the hands of Ali Hussein and his gang.