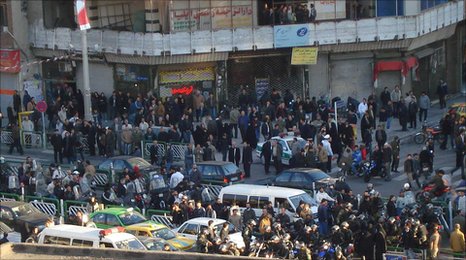 Iranian police have fired tear gas at opposition demonstrators gathering in central Tehran in support of the protests in Egypt.

A BBC producer in the Iranian capital, who was affected by the gas, described central Tehran as “total chaos”.

He said “severe clashes” were taking place between protesters and police and there had been many arrests.

It says the move is intended to block him from attending the rally in Tehran.

The BBC’s Mohsen Asgari in Tehran says thousands of people defied the government ban and gathered in the city centre chanting “death to dictators”.

Riot police and plainclothes police backed by the Republican Guards used tear gas to disperse the protesters, he adds, and many were arrested.

There are also reports of pro-opposition rallies in the cities of Isfahan and Shiraz.

Mr Mousavi’s detention is the latest in a series of arrests of people linked to Mr Mousavi and fellow opposition leader Mehdi Karroubi, who is also under house arrest.

Several opposition groups had vowed to take part in the protest, although officials have banned the gathering.

Although Iran’s establishment officially supports the Egyptian popular protests, it says the rallies are a “political move” by the two opposition leaders.

Authorities have stepped up security in the capital, blocked access to internet sites, and started jamming satellite news channels. 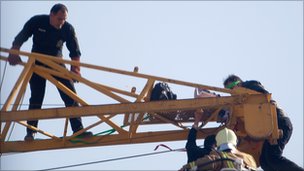 A man who climbed a crane in Tehran was arrested
Analysts say Tehran is trying to stop opposition groups from using the Egypt rally as a means to re-ignite anti-government protests – last seen in December 2009 – against the disputed re-election of President Mahmoud Ahmadinejad.

In an unusual move, an activist climbed a tall crane in central Tehran on Monday morning and began inviting people to attend today’s rally.

The protester was later arrested by police.

Also on Monday morning, Iranian police vans blocked the lane leading to the house of Mr Mousavi and disconnected his mobile phones and land lines, his website Kaleme.com said.

Both the Iranian government and the opposition have claimed credit for the recent popular uprisings in Tunisia and Egypt.

The government says the mass protests were inspired by Iran’s 1979 revolution, while the opposition says it was its 2009 protests that encouraged the unrest.

Are you in Iran? Will you be joining any protests? Or have you witnessed any of these events? You can send us your experiences using the form below: