Women in Somalia given choice. Marry, or be beheaded. 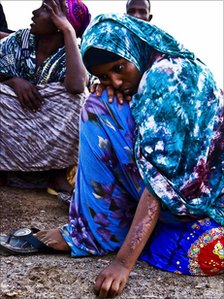 The parents of Somali Halim Ibrahim, 22, paid for her to travel alone, hoping she could earn them money in Yemen
Amina Ahmed’s letter, typed out in English by a fellow refugee, tells of a little known horror she and others endure in the tragedy that is Somalia’s ongoing civil war: The rape, forced marriage and even beheading of women at the hands of the Islamist militiamen who have overrun much of their country.

“I was living with my aunt in Afgooye district of the lower Shabelle region when [a] warlord assaulted our home as a reason to marry me by force.”

Her aunt tried to protect her from the man but he shot her dead.

Ms Ahmed fled next door to her neighbour’s, but the man followed and shot them all. Then Ms Ahmed fled, braving the perilous trip across the Gulf of Aden to reach Yemen.

“This year we have been hearing a lot about forced marriages and rapes,” says a member of an aid agency working on the ground with newly arrived Somali refugees in Yemen.

Like most who spoke about the actions of the hardline Islamist al-Shabab and other militias in Somalia, he refused to have his name published, fearing reprisals against his family still living in Somalia.

The head office of the aid agency also requested their name not be published for fear of attacks on their staff members in the country.

“Women cannot move or sit outside. They can’t even walk with their brother,” says the aid worker.

“Unmarried women are forced to marry and if she refuses they say she’s a non-Muslim. Many parents choose to send their girls away with relatives and friends so as not to be forced into marriage or raped.

“If a woman refuses a forced marriage, we have reports of them being beheaded and their head sent to their father.” 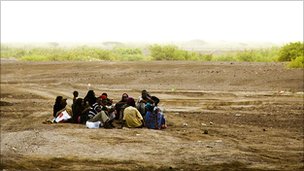 The journey across the Gulf of Aden leaves those migrants who survive exhausted
Somalia is and remains the world’s original failed state.

Since rival clans overthrew the government in 1991, civil war has consumed the country and its people.

Out of the anarchy of 15 years of warlords grew a vicious, religiously motivated militia, al-Shabab, whose control now extends over large swaths of southern and central Somalia and most of its capital.

Up to one million people have died from war, disease and famine in Somalia since 1991.

In January, the World Food Programme suspended operations in southern Somalia after al-Shabab threatened their staff.

For those who can, escape is the only hope. In the first half of this year alone the UN refugee agency, UNHCR, estimates 200,000 Somalis fled their homes.

Those with the least money, often who have lost the most, come to Yemen. Women like Hawo Yousef.

“They hit [my husband] badly and they wanted to rape me in front of him. He tried to protect me, but unfortunately they killed him with a big knife.” Mrs Yousef’s letter, written about her escape from Somalia to Yemen in 2007, details the horrors she endured during that journey.

Exhausted after days and nights and a dozen militia checkpoints aboard a rickety bus from Mogadishu to Bossasso, the pirate port on Somalia’s northern coast, Mrs Yousef’s two youngest daughters Aisha, five, and Fadma, three, had at last fallen asleep as the thin skiff pulled out into the ocean.

But just a few hours into the journey the engine spluttered and stopped, its petrol run dry.

“The boat was swinging around and there were sharks swimming around the boat,” Mrs Yousef recalls.

“People started to quarrel because they were scared. And the smugglers started to beat the people and throw them into the sea.”

Aisha and Fadma had woken and were crying; thirsty, hungry and sensing the fear of the adults around them. The smugglers lost their nerve.

“I couldn’t make my children be quiet and the smugglers warned me to silence them, but I couldn’t,” Mrs Yousef remembers. “Finally they ripped my children away from me and threw them into the sea.”

In her letter, handwritten by a fellow refugee and addressed “To Whom It May Concern”, Mrs Yousef describes her feelings:

“I had no ability to take back my kids from them. And I saw my kids dying on the sea. That compelled me to be mad.”

Mrs Yousef’s boat drifted for 13 days and nights before help and fuel arrived. More refugees drowned just metres from Yemen’s shore after being forced into the water by the smugglers.
Continue reading the main story

Nor did the baby that Mrs Yousef had carried in her through seven months of Somalia and 17 days of escape make it to new life in Yemen.

It died after a premature birth in the Kharaz refugee camp, a collection of concrete shelters and tents housing some 17,000 Somalis on a scorching plateau 180km (111 miles) from Yemen’s port city of Aden.

With her eldest daughter Mariam, 13, staying behind in Mogadishu, Mrs Yousef was left a childless mother of four, a refugee who had lost everything to escape to a country that is among the world’s poorest.

“Now I heal that wound,” she writes in the letter, asking the international community for help.

“But sometimes I remember and really I am in very bad situation with no choice what to do. I have no relatives here and I hope you consider my situation. Thank. Yours. Hawo tent no:- 69pt”

Hansetta Uma did not want her experience written out in a letter.

But after shooing away the men gathered outside her yellow canvas tent in Kharaz she agreed to speak about the men who drove her from Somalia.

Mrs Uma’s husband, a truck driver, was killed by a stray bullet in Mogadishu in June 2009. 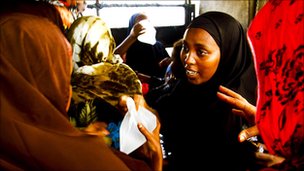 Aid agencies provide food and water to the Somalis in Yemen
After his death, she says her neighbour’s husband came to her home to demand that she marry him.

She knew the man, but as he stood in his black and white headscarf and thick, unkempt beard, she hardly recognised him for the al-Shabab fighter he had become.

“You are already married. Go home to your wife. I am not afraid just because my husband is dead,” she told him.

“If you keep refusing you can look for your head on the floor,” he replied.

“He tried to attack me at home but I escaped and began spending the night at different homes,” says Mrs Uma.

“But they kept finding me. My eldest daughter Zeinab was urging me to leave. So my friend gave me some money to escape.”

Mrs Uma left three of her children behind. Halim and Awais, the two youngsters, would be looked after by Zeinab, their 18-year-old sister.

“I pray God to protect her,” said Mrs Uma, who brought her youngest boy, seven-year-old Abdel Nasser to live with her as a refugee in Yemen.

“I feel so demoralised when I remember that. I get scared when I hear the name Shabab.”

5 Replies to “Losing your head over love”