This may look stupid and frivolous, but its yet another insidious attack against the single most important thing a living creature must be able to do.

Discriminate for its own interests.

From Life Site News with a H/T to Nick V 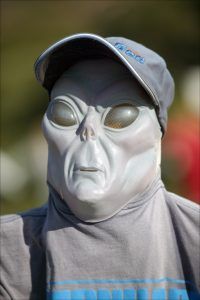 by Patrick B. Craine

TORONTO, Ontario, December 20, 2010 (LifeSiteNews.com) – The Ontario Human Rights Tribunal has ordered a Catholic school board to compensate three members of a prominent UFO cult after finding the board guilty of religious discrimination.

Daniel, Michel, and Sylvie Chabot, members of the Raelian cult, were hired in November 2006 by the Conseil Scolaire Catholique Franco-Nord to offer ‘emotional pedagogy’ training sessions for teachers.  They delivered such sessions through what they call the Academy of Pleasurology and Emotional Intelligence (APEI).

The Catholic board chose to end the contract in January 2007 after discovering their membership in the cult, which claims that humans were planted on Earth by benevolent extraterrestrials.

On December 15th, Tribunal vice president Michelle Flaherty ruled that the board had discriminated against the three siblings on the basis of their beliefs.  The parties had agreed to mediation, but asked the Tribunal to determine if the human rights code was violated.  The decision does not reveal how much the board must pay in penalty.

The Raelian sect was founded by former French sports journalist Claude Vorilhon, now known as ‘Rael’, in 1973 after he claimed that he had an encounter with aliens.  The cult is known for its strong support of human cloning, which is based on their belief that cloning will usher in a paradise where people live forever.

Daniel Chabot, who calls himself a bishop, said they have filed dozens of human rights complaints, but this is the first to side with them.  “It took us 17 years of relentless battles and one case before a Human Rights Tribunal in Ontario to finally have our voices heard,” he stated in a press release.  “This sentence was ironically delivered on Human Rights Day, December 10, 2010 and was, needless to say, a sweet victory.”

Ronald Demers, the school board’s chairman, told the Catholic Register that they will not appeal.  LifeSiteNews.com did not hear back from the board by press time.