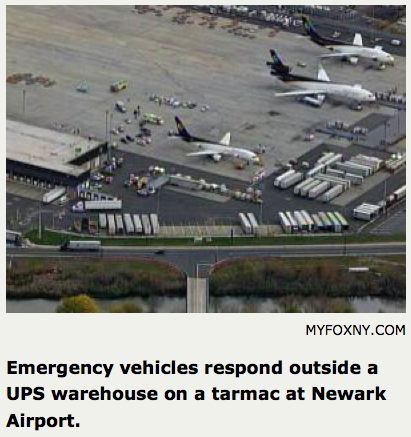 U.S. officials said there is no known threat associated with the plane, but it was being escorted to John F. Kennedy International Airport as a cautionary move.

Earlier in the day, federal authorities determined that suspicious packages taken from a cargo plane at Newark Liberty International Airport and a truck in Brooklyn and two planes in Philadelphia do not pose any danger.

Police in Brooklyn surrounded a UPS truck on Friday after suspecting that there was an explosive device, but the package turned out to be an envelope containing receipts, New York City Police Commissioner Raymond Kelly said in a press briefing.

The Boeing Co. 767 jet, which landed at Newark Liberty Airport, originated from East Midlands, U.K. It was later cleared to leave for Louisville, Kentucky.

“There was nothing threatening in that package,” said Steve Coleman, a spokesman for the Port Authority of New York and New Jersey. “It’s not suspicious anymore.”

Coleman said the package was inspected inside the UPS cargo facility, 350, and cleared about 12:10 p.m. He referred additional questions to the FBI. The FBI referred questions to the Transportation Security Administration.

“This is bigger than us,” Coleman said.

The White House says President Barack Obama was notified about a potential terrorist threat after suspicious packages were discovered aboard two airplanes bound for the U.S. and a statement is expected at 4:15 p.m.

The Newark incident did not impact flight operations at Newark Liberty Airport.

At the UPS terminal, there are no more emergency vehicles remaining. Earlier, there were eight Port Authority vehicles and a helicopter hovering in the general area.

The plane screenings were prompted after authorities in the U.K. on Thursday discovered a “manipulated” ink toner cartridge that was on a UPS flight bound for Chicago. The flight originated in Yemen, and authorities on Friday were focusing on cargo flights from Yemen, CNN reported.

There are conflicting reports whether the cartridge contained explosives. CNN is reporting that the United States received a tip from an ally that the device might have been destined for synagogue in Chicago.

Federal officials are looking into whether the packages were a test-run for a plot to send bombs through the mail.

The Philadelphia flights originated in Paris and Germany, a UPS spokesman told Bloomberg.

UPS said Friday that it was working closely with law enforcement agencies.

“We can confirm that authorities have investigated two aircraft in Philadelphia and one in Newark. All of these aircraft have landed safely. Security is of the utmost importance to UPS,” the company said in a statement.