Notes on the neo-Nazi-Islamist alliance, by Daniel Pipes: 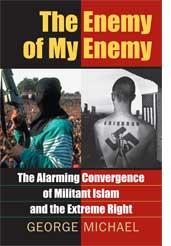 Several of us have focused on the opening that the Left has provided to Islamists (for example, David Horowitz’ Unholy Alliance: Radical Islam and the American Left and my “Left ? CAIR, MPAC, et al.“), but we have nearly ignored the neo-Nazi affection for radical Islam. Jeremy Reynalds takes a step to remedy this lacuna with an article today, “White Supremacist Group Offers Friendship & Support To Terror Groups,” where he documents the admiration of Aryan Nations’ National Director August Kreis for jihad:

I offer my most sincere best-wishes to those who wage holy Jihad against the infrastructure of the decadent, weak and Judaic-influenced societal infrastructure of the West. I send a message of thanks and well-wishes to the methods and works of groups on the Islamic front against the jew such as Al-Qaeda and Sheik Usama Bin Ladin, Hamas, Islamic Jihad, Hezbollah and to all Jihadis worldwide who fight for the glory of the Khilafah.

Applying for membership in Aryan Nations involves subscribing to the following statement, which is not exactly in the Islamic spirit: “I am of the White Aryan Race. I concur that Aryan Nations is only Aryans of Anglo-Saxon, Germanic, Nordic, Basque, Lombard, Celtic and Slavic origin, the White non-Jew race worldwide. I agree with Aryan Nations’ Biblical exclusion of Jews, Negroes, Mexicans, Orientals, and Mongrels.” (The ADL has additional information available on the Aryan Nations.)

Comment: While Islamists openly consort with the Left, their association with the neo-Nazi Right is generally too disreputable to be public, though there are exceptions, such as the Council on American-Islamic Relations’ and other organizations’ connections to William W. Baker. As Islamists become more daring, they are likely to flaunt this connection more openly. (March 9, 2005)

You might think white supremacists like Kreis would spurn al Qaeda, since they tend to view non-Aryan Christians as, in their own term, “mud people.” In fact, most of them do. But Kreis wants to change that. “That’s old-school racism, white supremacy, this is something new,” he said. “We have to be realists and realize what didn’t work [previously] isn’t going to work in the future.”

Schuster concludes that “while August Kreis may be calling, there is no sign that al Qaeda is listening,” at least not so far.

Sep. 1, 2005 update: Daveed Gartenstein-Ross provides fuller information on Kreis, plus he surveys other neo-Nazi efforts to reach out to the Islamists, including those by William Pierce, James Wickstrom, Ahmed Huber, William W. Baker, and the Institute for Historical Review, at “The Peculiar Alliance: Islamists and neo-Nazis find common ground by hating the Jews.” He concludes with the same worries I have:

Moving forward, this peculiar alliance presents the risk that neo-Nazis may collaborate with Islamist terrorist groups on attacks. But a second danger is that the far right’s newfound legitimacy in the Arab world may allow neo-Nazi figures to claw their way out from the lunatic fringe to which they’re currently relegated.

Oct. 19, 2005 update: It’s not clear who Ghassan Haddad is or what his views are, but this news item, “Agents say man helped supply machine guns,” from the Seattle Post-Intelligencer bears watching:

Federal agents Tuesday arrested a man they say manufactured illegal machine guns and helped supply automatic weapons to a Seattle-based gun ring run by a neo-Nazi. Ghassan Haddad—the gunsmith who is accused of working with neo-Nazi Keith Gilbert and others to peddle automatic weapons at gun shows and from a house in Seattle’s Roosevelt neighborhood—was arrested in Southern California. He is facing three federal felony charges in U.S. District Court in Seattle: dealing in firearms without a license, manufacture of an unregistered firearm and possession of an unregistered firearm.

The FBI’s Joint Terrorism Task Force arrested Gilbert on Feb. 16 near his home near Northeast 65 Street and Roosevelt Way Northeast. Gilbert—a former Aryan Nation activist—once bragged that he planned to blow up the Rev. Martin Luther King Jr. with 1,400 pounds of TNT and did prison time for threatening black children. His trial on multiple weapons charges is set for December. The current weapons charges make no accusations that the weapons were to be used in acts of terrorism.

Over about a year beginning in July 2003, a witness cooperating with the Bureau of Alcohol, Tobacco, Firearms and Explosives began buying AK rifles from Gilbert. One of the rifles—which could easily be converted to a machine gun—came from Haddad, Gilbert told the witness. Undercover agents watched Haddad working at a booth at the Puyallup Gun Show. One agent approached him, and Haddad allegedly told him he “knew people who could assist, for a fee, in creating an automatic weapon from the parts Haddad sold. Haddad stated that he would describe the assembly of the automatic parts needed to produce an automatic weapon,” according to court documents.

Another alleged accomplice, Sergey Zarodnyuk, told agents that Haddad had worked with him to convert some of the approximately 40 deactivated AK rifles he had shipped from Ukraine to the United States into fully automatic machine guns.

Apr. 1, 2006 update: George Michael of the University of Virginia at Wise has just published an important study on this topic, The Enemy of My Enemy: The Alarming Convergence of Militant Islam and the Extreme Right (University Press of Kansas). It neatly complements the 2004 study by David Horowitz, Unholy Alliance: Radical Islam and the American Left (Regnery).

Apr. 24, 2006 update: The Times (London) recounts the story of one David Myatt, a founder of the British National Socialist Movement jailed for his racist attacks, and who is said to be the author of a Fascist terrorist handbook and a former leader of the violent far-right Combat 18 group. “But now — in his mid-50s and sporting a red, bushy beard — he subscribes to radical Islamist views.” Renamed Abdul Aziz ibn Myatt, he explains himself thus:

The pure authentic Islam of the revival, which recognises practical jihad as a duty, is the only force that is capable of fighting and destroying the dishonour, the arrogance, the materialism of the West . . . For the West, nothing is sacred, except perhaps Zionists, Zionism, the hoax of the so-called Holocaust, and the idols which the West and its lackeys worship, or pretend to worship, such as democracy. They want, and demand, that we abandon the purity of authentic Islam and either bow down before them and their idols, or accept the tame, secularised, so-called Islam which they and their apostate lackeys have created. This may well be a long war, of decades or more — and we Muslims have to plan accordingly. We must affirm practical jihad — to take part in the fight to free our lands from the kuffar [unbelievers]. Jihad is our duty.

Nov. 19, 2006 update: The examples so far have been of rightists admiring jihadis, but the warm feelings also go the other way, as evidenced by the example of Asghar Bukhari, a founding member of the Muslim Public Affairs Committee (MPAC-UK), a British Islamist group, who sent funds to Holocaust-denier David Irving and raised money among other Islamists toward this end. Jamie Doward of The Observer provides details:

In one email Bukhari tells Irving: “You may feel like you are on your own but rest assured many people are with you in your fight for the Truth.” Bukhari pledges to make a donation of £60 to Irving’s fighting fund and says that he has asked “a few of my colleagues to send some in too.” He also offers to send Irving a book, They Dare to Speak Out, by Paul Findley … who has attacked his country’s close relationship with Israel. Bukhari says Findley “has suffered like you in trying to expose certain falsehoods perpetrated by the Jews.” In a follow-up letter, Bukhari writes: “Here is the cheque I promised. Good luck, if there is any other way I can help please don’t hesitate to call me. I have also asked many Muslim websites to create links to your own and ask for donations.”

Related Topics: Conservatives & Liberals, Radical Islam, US politics receive the latest by email: subscribe to daniel pipes’ free mailing list This text may be reposted or forwarded so long as it is presented as an integral whole with complete information provided about its author, date, place of publication, and original URL.