FREE SPEECH AND ANTI-ISLAMIZATION
HANGS IN THE BALANCE! 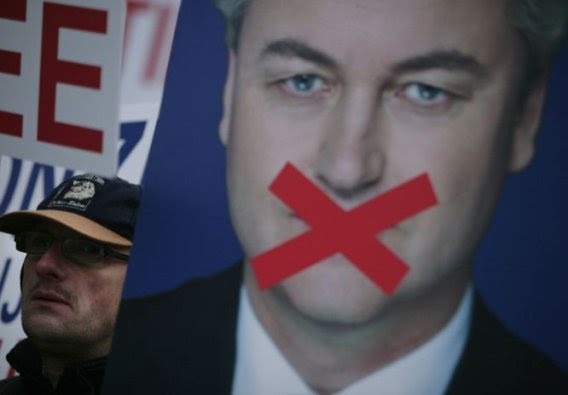 UPDATE: Here is the first report coming from the court room:

“At the start of proceedings, the presiding judge said it had been “suggested” that the court had already convicted Wilders before its first hearings. He would therefore “like to emphasize that only after the last word in these hearings has been said, the court will deliberate about its decision.”
In his opening statement, Wilders’ lawyer Bram Moskowicz questioned why the trial was taking place in Amsterdam rather than in The Hague, where his client works. Most of the complaints filed against Wilders since 2006 were related to remarks he made as a lawmaker in the Hague-based parliament, he said. Moskowicz also argued that Wilders’ remarks about Islam were made only in the context of his work as a lawmaker, and that he never spoke “a titre personnel,” or in his personal capacity. ”

AMSTERDAM – Supporters of Dutch anti-Islam politician Geert Wilders are demonstrating outside an Amsterdam court where he is appearing to answer charges of inciting hate against the Netherlands’ Muslim minority.
Wilders’ lawyer Bram Moszkowicz has challenged the court’s jurisdiction and argued the case against his client is unfounded.
Wilders has been charged over remarks comparing the Quran to Hitler’s “Mein Kampf” and calling for it to be banned in the Netherlands. He has become one of the country’s leading politicians by giving a voice to anti-immigrant sentiment.
Presiding Judge Jan Moors assured Wilders on Wednesday he would receive a fair trial.
Supporters outside the court said Wilders’ prosecution is an assault on freedom of speech