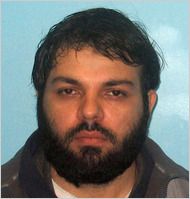 NYT… Two men from Queens who had traveled to Pakistan in 2008 with a Denver airport shuttle bus driver who later was charged in a Qaeda bomb plot were arrested early Friday morning in connection with the case, according to the F.B.I.

The two men, Adis Medunjanin, 25, and Zarein Ahmedzay, 24, came under intense scrutiny during the investigation that led to a federal bombing conspiracy indictment against the shuttle bus driver, Najibullah Zazi, 24, in September, and have remained under investigation, officials have said.

The charges against Mr. Medunjanin and Mr. Ahmedzay — who both attended Flushing High School, as did Mr. Zazi — were not immediately made available on Friday morning. But the two men were expected to be arraigned later in the day in federal court in Brooklyn, where the charges were lodged against Mr. Zazi.

“Early this morning, Adis Medunjanin and Zarein Ahmedzay were arrested by the F.B.I.- N.Y.P.D. Joint Terrorism Task Force,” said James M. Margolin, a spokesman for the bureau’s New York office. He referred additional questions to the office of the Brooklyn United States Attorney, Benton J. Campbell, which is prosecuting the case and overseeing the investigation. A spokesman for Mr. Campbell declined comment.

A lawyer for Mr. Medunjanin, a United States citizen who is originally from Bosnia, has consistently denied that his client had any role in any terrorist plot or was involved in any wrongdoing. On Friday morning, the lawyer, Robert C. Gottlieb, accused the authorities of keeping his client away from him and from relatives, and said any statements Mr. Medunjanin may have made if he was questioned on Thursday night or Friday morning would therefore be inadmissible.

Mr. Ahmedzay’s father said on Thursday night that he has no lawyer. Another family member has denied that the young man, who like Mr. Zazi is originally from Afghanistan, was involved in any wrongdoing.

The arrests of the two young men sometime after midnight came hours after two agents from the Federal Bureau of Investigation seized Mr. Medunjanin’s passport at his family’s Flushing apartment, pursuant to a search warrant, about 3 p.m. on Thursday. That led to a strange series of events that ended with Mr. Medunjanin in the custody of F.B.I. agents and police detectives and undergoing questioning, according to law enforcement officials.

Roughly an hour after his passport was seized, Mr. Medunjanin, who was being trailed by agents and detectives from the joint task force, was involved in a car accident near the Whitestone Bridge, according to law enforcement officials.

Mr. Medunjanin, who graduated from Queens College in June, got out of the car and apparently tried to flee the scene on foot. He was pursued and apprehended by the investigators, a law enforcement official said. He was taken to New York Hospital Queens, where he was treated for minor injuries, and then questioned by agents and detectives, a law enforcement official said.

Mr. Zazi, according to court papers filed in his case, admitted to F.B.I. agents during questioning in September that he had received training in weapons and explosives from Al Qaeda during his 2008 trip to Pakistan, although he has denied taking part in a bomb plot, and has pleaded not guilty to the charges against him.

Mr. Medunjanin’s lawyer, Mr. Gottlieb, said that two agents had gone to his client’s apartment with a search warrant for the passport.

The warrant, he said, indicated that the passport was being sought as part of an investigation into a conspiracy to use weapons of mass destruction — the formal charge leveled against Mr. Zazi in September — and receiving military-type training from a foreign terrorist organization.

On Friday morning, Mr. Gottlieb said that he had been trying to contact federal authorities for nearly 12 hours, and that they had not notified him of his client’s arrest. He said that he had gone to the hospital on Thursday night after learning of the accident, and then to the nearby police precinct station house where, an emergency room nurse told him, Mr. Medunjanin had been taken. But, he said, he was unable to locate his client.

He said a desk sergeant at the station house told him Mr. Medunjanin had been taken to the Task Force’s offices in Manhattan, but he was unable to reach anyone there or at the prosecutor’s office.

The Task Force investigators and prosecutors, he said, knew that Mr. Medunjanin was represented by a defense lawyer and therefore could not legally question him without his lawyer present.

“And, therefore, if they did question him, it was an illegal interrogation and has to be thrown out,” Mr. Gottlieb said.

In September, Mr. Medunjaninand and Mr. Ahmedzay became the focus of intense investigation, partly because they had traveled to Pakistan in 2008 with Mr. Zazi, people with knowledge of the case have said.

Agents and detectives assigned to the task force searched their homes, questioned them at length in voluntary interviews and took fingerprints from them, people briefed on the case have said. During the searches, investigators took cellphones and laptop computers, which family members said were later returned, and other items.

Both men were also kept under surveillance.

Another measure of investigators’ interest in the two men could be found in an incident that some investigators have said forced them to begin executing search warrants and take the investigation into Mr. Zazi public before they were ready.

Police detectives assigned to the Intelligence Division showed photographs of the two men, along with a picture of Mr. Zazi and an unidentified man, to a Queens imam who had helped the police in the past, according to the cleric’s lawyer, Ronald L. Kuby. The imam, Ahmad Wais Afzali, was later arrested on charges of making false statements and accused of warning Mr. Zazi that he was being sought by the authorities. Mr. Zazi’s father, Mohammed Wali Zazi, was also charged with making false statements in the case.

Mr. Zazi, who was born in Afghanistan, was raised in Pakistan and lived in Queens for 10 years before moving to Denver in January, was ordered held without bail in September after he pleaded not guilty to a bombing conspiracy indictment of a single count. A detention memorandum filed in federal court detailed what prosecutors said was his effort to make homemade explosives and his drive from Colorado to New York.

“Zazi and others flew from Newark Liberty International Airport to Peshawar, Pakistan,” the memo said, referring to the 2008 trip, without identifying the others.

Mr. Medunjanin, Mr. Zazi and Mr. Ahmedzay, 24, a taxi driver, had all lived in the same Flushing neighborhood. After they returned from Pakistan, Mr. Zazi moved to Denver, where he worked as a shuttle bus driver at Denver International Airport, according to court papers and people briefed on the matter.

Mr. Medunjanin’s and Mr. Ahmedzay’s apartments were among four that were searched in September as part of the investigation that led to bombing conspiracy charges against Mr. Zazi a week later.

“After all these months, when I was hoping they had closed the book on him, it indicates that things are still percolating, and the family is very upset,” Mr. Gottlieb said of the search warrant on Thursday, before learning of the car accident and subsequent arrest. “He did not do anything wrong, and if the book isn’t already closed, it should have been.”