Saudi women enter Wahhabist ‘modernity’ through a ground breaking move to stay in the 7th century. 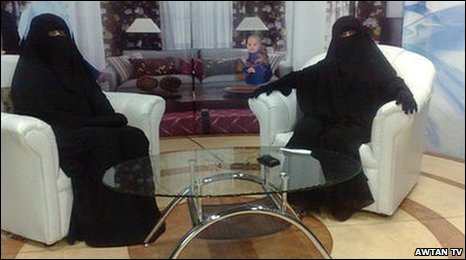 Until recently you would never have seen women presenting television programmes dressed from head to toe in the niqab or burqa. But on the Saudi religious channel Awtan TV it has now become the norm.

Female broadcasters at the station are draped in the all-enveloping dresses, which are usually black and also cover their faces.

The work environment too is very different. Male technical assistants do not enter the studio while the women are presenting.

There are more than 60 religious channels across the Middle East. Some allow women to present programmes without being fully covered or dressed in black.

Others have no women presenters at all.

Awtan TV decided to take a unique approach. The station was launched in 2008, and last month it set a precedent by allowing women to present, but only on the condition that they wear the niqab.

A key element of the programme is the relationship built between presenter, contestants and the audience – something that might be more difficult if the presenter is totally covered up.

“The face is not the only way to build a relationship,” explains Ms Barqi, speaking to BBC Arabic.

“We’re always receiving calls from viewers in various countries encouraging us to keep doing what we do.”

And, as Ms Barqi points out, women are not just confined to the studio at Awtan TV.

“We report from the field in the niqab and it does not stop us from doing anything.”

Wahhabism, the strain of Sunni Islam that is officially practised in Saudi Arabia, is considered one of the religion’s most conservative forms.

Some critics say that Awtan TV is restricting women’s freedom by making it compulsory to wear the niqab if they want to be presenters.

The issue recently returned to prominence when a leading Egyptian cleric, Sheikh Mohammed Tantawi, said he would issue an edict stating that the niqab was a “custom that has nothing to do with Islam”.

The majority of moderate Muslim scholars agree with him.

But Ms Barqi says nobody “forced the niqab” on her and she does not intend to force it on her three daughters, who watch their mother on television and feel proud of her. 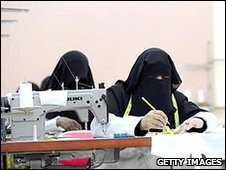 These seamstresses in Saudi Arabia work in the factory completely veiled

However, the presenter thinks that when the time comes, her girls will want to wear the niqab because that is how they were brought up and it is, she argues, part of Shariah – Islamic law.

Ms Barqi says there are other good reasons why she wears the niqab.

It helps her to concentrate more on her work rather than anything else, and what she looks like is irrelevant.

“We don’t introduce ourselves as beautiful women who put on layers of make-up. Our audience is focusing on what we present to them, our ideas and our discourse.”

Ms Barqi believes some people work in the media to become famous. But that is not why she became a presenter.

“We don’t need fame,” she explains.