From The Ottawa Sun: 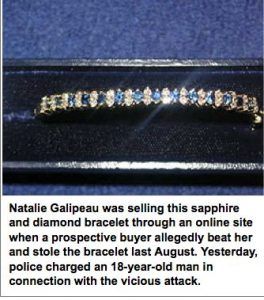 “I don’t remember anything after the call that came at 8 p.m.,” Natalie Galipeau said about the night she was nearly killed by a stranger. Almost four months later, police say they have the man who did it.

Galipeau, 31, was trying to sell a sapphire and diamond bracelet for $1,250 online when she was contacted by a man who said he was interested in purchasing it.

They eventually agreed to meet at Galipeau’s home on Plainhill Dr. in the city’s east end.

She walked outside with the bracelet at about 9 p.m. on Aug. 18 while her husband and daughter remained inside.

Her next memory is of waking up in a hospital bed days later with them at her bedside.

Police said Galipeau had been viciously attacked and then dragged by the suspect’s car for about half the length of a football field before ending up on the street in a pool of her own blood. She had suffered multiple skull fractures and was put into an induced coma for three days because of swelling in her brain.

She also had three teeth knocked out and had to have surgery on one of her eye sockets.

The pain never leaves her.

“Sometimes I cry from the headaches,” she said. “It’s taken a long time after the hospital to even get this far.”

An appointment with a neurologist is the next step of many still to be taken.

But for one day, at least, good news.

“We’re very happy and relieved,” she said after being told of the arrest. “It made my little girl smile a lot.”

Galipeau, her husband Louie and seven-year-old daughter never gave up hope the police would get their man.

“The police were always confident and they told me they would never let it die no matter how long it took,” she said.

Police called Thursday to say they were interviewing someone. Then Friday the call they were all waiting for came.

“I’m surprised it happened so quickly after they said they were talking to someone,” she said.

Yonis Awais Hassan, 18, of Ottawa is charged with two counts of robbery, two counts of conspiracy, theft, aggravated assault, dangerous operation of a motor vehicle and failing to remain at the scene of an accident in connection with this case and two other robberies.

Police are looking for an accomplice.

Galipeau said if Hassan is the person who did this to her, her husband is happy about one thing.