From The Straits Times 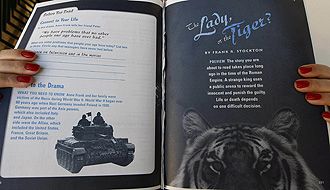 ANNE Frank’s diary has been censored out of a school textbook in Lebanon following a campaign by the militant group Hezbollah which claimed the classic work promotes Zionism.

The controversy erupted after Hezbollah learned that excerpts of The Diary of Anne Frank were included in a textbook used by a private English-language school in western Beirut.

Hezbollah’s Al-Manar television channel ran a report slamming the book for focusing on the persecution of Jews.

‘What is even more dangerous is the dramatic, theatrical way in which the diary is emotionally recounted,’ the report, aired last week, said. It questioned how long Lebanon would ‘remain an open arena for the Zionist invasion of education.’ Read More