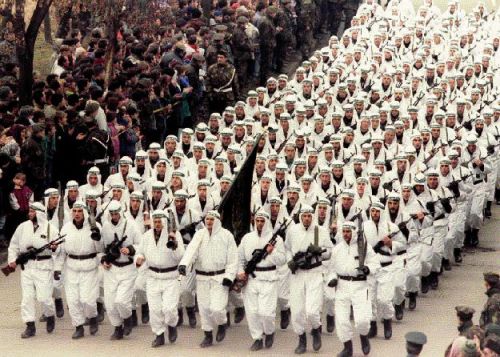 In what could be a scene from Gaza
“Bosnians on parade”

The Euros and the US could care less if the Serbs become Islamized by the (laugh) “moderate” Bosniak Muslims, as long as there is a strong central government in the fake construct called Bosnia. It reminds the Tundra Tabloids greatly of Belgium, more so now since Belgium is becoming even more inundated with Muslims than ever before. Belgium is a fake construct with absolutely no national conscience that binds them together, and the very same can be said about Bosnia.
The Serbs are being vilified, as are the Flemish Vlaams Belang, for their stand for self determination, and unwillingness to become Mohamedized to suit the whims of EU bureaucrats. Islamized Europeans called “Bosnian Muslims”, are demanding a more centralized control over the non-Muslim population, in an attempt to solidify their control, which suits the Euro elite trash rather nicely who would like nothing better than the Serbs totally islamize themselves so they fit better into an increasingly Islamized Europe.  KGS

TELEGRAPH: Bosnia is heading for a new civil war is a constitutional crisis threatens to cause the collapse of the political system, the country’s leaders have warned.
The concerns have been triggered by Bosnian Serb leaders who have stepped up their demands for independence with a warning the country is no longer “sustainable”. The growing ethnic divisions have raised fears of a return to the fighting which claimed the lives of up to 110,000 people between 1992 and 1995.
[…]
Mr Rehn said on Wednesday: “This political stalemate has dragged this country backwards.
“I hope that Bosnian leaders will rise to the occasion for the sake of their citizens and for the sake of the Western Balkans and Europe as a whole.” Brussels is holding out the prospect of EU membership as an incentive for constitutional reforms.
“We are aiming at agreeing certain constitutional changes that will make Bosnia-Herzegovina a functional state and able to be considered as candidate country for the EU. We want Bosnia Hercegovina to be a credible applicant for EU and Nato membership.
“But for this to happen the country needs to stand on its own feet without the OHR [High Representative] and its broad executive powers. No quasi-protectorate can join the EU.”

NOTE: Interesting comment to the article in the second link:

“Aside from derailing every effort that might have prevented the war in the first place, The International Community’s gift to Bosnia (via the OHR) was the largest and most wasteful government on Earth. Per capita – 4 million people (especially those on the “Federation” side – another State Department disaster) have more unaccountable and non elected officials (careerist thieves one and all) getting a pay check and perks for telling the country, entity, canton and municipality what to do, how to do it and how much to pay for it than a nation with twenty times the population.

The Republika Srpska is, for whatever other faults it may have, a model of streamlined public efficiency by comparison – it’s no wonder that they don’t wish to trade the moderate success of their public administration and growing economy for the stagnant corruption of the kleptocracy that runs the show from West Mostar and Sarajevo.”

Sounds more and more like Belgium, in which the more efficient and product half, the Flems, support the welfare sponges of Walloonia.