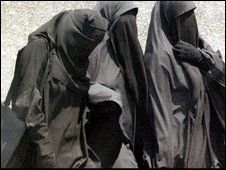 The niqab has become increasingly popular among Egypt’s Muslim radicals

BBC NEWS… Egypt’s highest Muslim authority has said he will issue a religious edict against the growing trend for full women’s veils, known as the niqab.

Sheikh Mohamed Tantawi, dean of al-Azhar university, called full-face veiling a custom that has nothing to do with the Islamic faith.

Although most Muslim women in Egypt wear the Islamic headscarf, increasing numbers are adopting the niqab as well.

The practice is widely associated with more radical trends of Islam.

The niqab question reportedly arose when Sheikh Tantawi was visiting a girls’ school in Cairo at the weekend and asked one of the students to remove her niqab.

The Egyptian newspaper al-Masri al-Yom quoted him expressing surprise at the girl’s attire and telling her it was merely a tradition, with no connection to religion or the Koran.