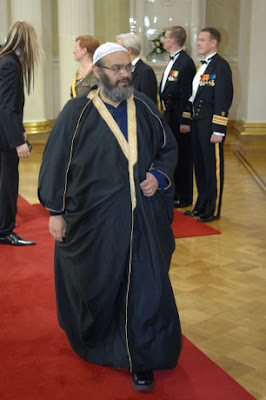 The Finnish blogger Vasrahammer sends the following story of the infamous Finnish Imam from Lebanon, Khodr Chehab, about his latest interview on a Finnish radio program, where he expounds on his desire for ”portions” of sharia law to recognized by Finnish state law. He’s careful enough not to demand the whole “enchilada shahada”, by insisting that it only pertain to matters involving marital disputes, dividing of wills and child custody rights.

The Tundra Tabloids believes it’s safe to say that the man -who admitted he wed an underage girl in Finland, before taking it all back- is lying between his crusty teeth, and is being very careful to sound….moderate. Read what a Finnish blogger had to sayabout Chehab and his changing of the particulars to the story in question.

Khodr Chhab is also the same guy who wanted the Finnish government to ensure that the reprinting of the dreaded Mo-toons would never occur here in Finland, as well as insisting that sharia law is already at work in Finland. Who knows what kind of “justice” has been enforced upon women in Finland who do not want to go before any such court, but were forced to do so, by their male spouses and/or relatives?

Vasarahammer sums it up by stating in his email to the Tundra Tabloids concerning Chehabs interview, “It has come to this“. Unfortunately that’s true, and will continue in being so as long as the host culture keeps turning a blind eye to what Islam actually represents, due to the incredibly ridiculous fear of being afraid to “offend”. KGS

Shari’a law’s official status would enhance multiculturalism in Finland, says the Finnish Islamic Community’sImam Khodr Chehab. Jewish and Muslim courts in Britain, can settle in accordance with Britain’s own laws, the things that do not conflict with state laws.

– I think the British model is a good thing, “says Chehab. Then everyone is free to choose according to what is a good system for themselves. It is a broadening of multi-culturalism. It is difficult to say directly, whether Finland needs a more formalized shari’a system. There would then be needed good mediators to deal with such things. My religion should have a good understanding and feel for the laws of Finland.

Lack of status is reflected for example in divorce cases, says Finnish Islamic Council spokesman Isra Lehtinen. The Islamic distinction is not official in the eyes of society. Maistraatin paperi ei taas aina riitä eroon islamin lain mukaan. While the magistrate’s paper is not always sufficient enough to divorce according to Islamic law.

Finnish Islamic Council however, does not demand a formalization of a shari’a-judge or of the role of mediator.

The Islamic community (Islamilainen Yhdyskunta)is increasing its activities since the early days of 1987. In addition to the Islamic community there also operates a number of other Muslim societies. Muslims in Finland are estimated to be over 40 000. The number has increased dramatically in recent years, as a result of inter alia, immigration.

– Islam relates to every aspect of life. Shari’aan belongs to all, to the whole of life, “says Imam Chehab. Shari’a law is a whole system, like the Ministry of Justice. It has a clear code of conduct, which judgment may be issued and on what basis.

Imam Khodr Chehab has before the interview, wedded a Muslim couple. The cerimony does not take long, the delivery only takes about ten minutes.

The conclusion of a marriage, divorce, crime, or even the dividing of an inheritance is done according to Islamic faith in shari’a. The law is based on the Koran and the life of the Prophet, on which the Prophet Muhammad’s example has been compiled. Purpose of the law is to direct the believer to live in accordance to God’s will.

Finnish Muslim community is one of those religious communities which have been granted the right perform marriage cerimonies. The cerimony is official to the perspective of both Islamic shari’a law, and that of Finnish regulations. Shari’a rules are possible to comply with the regulations in certain areas, but it’s not in competition with the judiciary.

– Finland does not have working shari’a courts. Cases would be then decided by a judge and the state behind him, in support of the decisions. We have an Advisory Board and the role of mediator.

The Advisory Board mediates the conflicts of family problems and disputes from a religious perspective. The law does not apply, but it is voluntary. Both parties must accept the settlement.

Reposting this excellent example that Eeyore found, that dovetails nicely with the Khodr Chehab story. This is what Finland can expect if the political elite cave in to Chehab and his fellow purists and let them have their way.