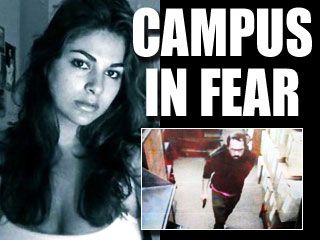 A surveillance photo believed to be of Stephen Morgan, suspected in the deadly shooting of Wesleyan University student Johanna Justin-Jinich.

The family of 29-year-old suspect Stephen Morgan urged him to turn himself in “to avoid any further bloodshed.”

Morgan allegedly opened fire Wednesday on junior Johanna Justin-Jinich while she was working at a cafe bookstore.

The pair had attended a program together at New York University when Morgan began sending Justin-Jinich harassing e-mails, according to a New York City police report. 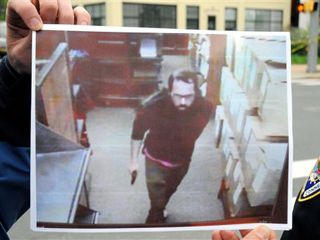 Diana Morgan, Stephen Morgan’s youngest sister, read a prepared statement to reporters outside the family’s home in Marblehead, Mass., but did not take questions.

“Turn yourself in right now to any law enforcement agency wherever you are to avoid any further bloodshed,” she read.

The family says they are “shocked and sickened by the tragedy” in Middletown, Conn. They say they are cooperating with investigators but don’t know where Morgan is.

“This was not a random act of violence,” Middletown, Conn., Police Chief Lynn Baldoni told reporters Thursday. “Evidence uncovered overnight suggests that Mr. Morgan may be focused on the Wesleyan campus as well as the Jewish community.”

Click here to see video of the press conference.

Though Middletown authorities were mum on details, a New York City police report shows that Morgan allegedly threatened Justin-Jinich in 2007, when they were attending a six-week summer program at NYU.
Related Stories

The two stayed in separate student housing, NYU spokesman John Beckman said in a prepared statement sent to FOXNews.com. He didn’t elaborate on what course they took together.

Justin-Jinich filed a harassment complaint on July 10, 2007, toward the end of the program, claiming that Morgan was calling her repeatedly and had been sending her insulting e-mails for at least a week.

“You’re going to have a lot more problems down the road if you can’t take any (expletive) criticism, Johanna,” one of the e-mails said, according to the police report.

Morgan had apparently already left New York for Boston at the time the complaint was filed and was not arrested.

“The Public Safety Department brought in the NYPD, and initial conversations were conducted with each person by the police,” Beckman said. “Ultimately, after attempts to follow up with Ms. Justin-Jinich about pursuing the matter, she declined to pursue the case.”

Investigators also wouldn’t confirm that the victim was able to speak to authorities at the crime scene and identified Morgan as the gunman before she later died at the hospital.

Authorities said they aren’t sure whether Morgan is still in the Middletown area. He has prior connections to Colorado and Massachusetts, as well as to New York, they said. Justin-Jinich was from Timnath, Colo.

Morgan wasn’t a student at Wesleyan, and it was unclear where he currently lives.

Morgan’s last known address was Swampscott, Mass. His brother, Greg Morgan, told the AP that the family is distraught over the shooting. He said they have not spoken to Morgan in several weeks.

“I am devastated by what happened to this young girl at Wesleyan,” he said. “We’re just absolutely distraught over everything that’s gone on. We’re just hoping that they find my brother and no one else gets hurt.”

Greg Morgan said his brother has not shown anti-Semitism in the past. “My brother was a very sweet person and had a big heart and I hope he’s OK,” he said.

Family members have tried to contact him but can’t find him, Greg Morgan said.

Police would not say why they believe Morgan may target the university or Jews, but have warned both the university and local Jewish leaders to be “extra vigilant,” according to Baldoni.

Wesleyan couldn’t immediately confirm what percentage of its students are Jewish. University spokesman David Pesci told FOXNews.com that he wasn’t sure whether such breakdowns were tracked.

School officials told students, faculty and staff to stay home while the suspect is on the loose. The university posted the warning Thursday morning on its Web site.

“Wesleyan has instructed all students to remain inside their residences and remain vigilant,” said university President Michael Roth at Thursday’s news conference. “We have also asked faculty and staff not to come to their offices.”

He said he hasn’t “seen any sign” of widespread panic among students and faculty, and there is an increased local and campus police presence.

Most buildings on campus, including cafeterias and the library, were locked. Normally bustling sidewalks were empty and police cruisers patrolled the campus. In dorms, students dressed in flip-flops, gym shorts and pajama pants shuffled downstairs to pick up box lunches of roasted vegetable, tuna fish or cheese sandwiches.

“I’m staying inside,” said freshman Christina Yow, of China. “We’re supposed to do some work, but really I just keep checking my e-mail and checking on friends and letting people from home know that I’m OK. Anything to distract.”

Brenna Galvin, a sophomore from Amherst, N.H., said her family was considering bringing her home.

“It’s hard to know what to do,” she said. “Really, we’re just trying to keep in touch with people at home.”

Middletown’s only synagogue, Congregation Adath Israel, is across the street from the bookstore. It was closed Thursday and congregants were considering canceling Sabbath services Friday night and Saturday.

“It was a no-brainer to close the building until we knew more information,” he said. “We didn’t know if he was planning something. We’re hoping that they catch him before tomorrow night.”

Middletown police told the media in a recorded voice message that there would be no more updates or comments from them Thursday unless there were developments in the investigation.

Victim Remembered as ‘Loving’ and ‘Beautiful’

The victim was studying public health, her friends said.

A spokeswoman from Planned Parenthood told FOXNews.com that officials at its Colorado and Connecticut branches found no evidence in their records that Justin-Jinich had volunteered there, despite media reports that she had.

Justin-Jinich reportedly was set to work as an intern for a women’s organization on Capitol Hill this summer, the Courant said.

She would have graduated next year from Wesleyan, an elite private liberal arts school with about 3,000 undergraduate and graduate students.

Police say a disguised gunman fired at Justin-Jinich several times about 1 p.m. Wednesday while she worked at the popular Red and Black Cafe inside Broad Street Books near campus. He then fled into the bustling downtown area, leaving his wig behind.

“She’s been shot,” a woman answering the phone told a masseuse whom the victim had an appointment with. A thin man with a long-haired wig “ran up in here and shot at her at point-black range.”

Justin-Jinich was pronounced dead at the hospital.

Authorities circulated a surveillance photo taken inside the bookstore of a thin, bearded man they believe is Morgan. They describe him as armed and dangerous.

There were several witnesses to the shooting, and police found a gun at the bookstore in addition to the wig used by the gunman. They haven’t confirmed that it was the weapon used in the killing.

The shows were canceled, as was a candlelight vigil for the victim because police warned against such gatherings.

Justin-Jinich was a 2006 graduate of the Westtown School, a private Quaker boarding school in rural southeastern Pennsylvania, about 25 miles west-southwest of Philadelphia.

Middletown Mayor Sebastian Giuliano said he has college-aged children of his own and can identify with Justin-Jinich’s family.

“This has to be every parent’s worst nightmare,” he told reporters Thursday. “The loss is unimaginable. To every student, we want you to know how precious you are.”

“She was the most giving and loving person I have ever known,” Lucid told the Courant. “I’ll remember her loyalty and her warm smile whenever I saw her and her very funny voices she would make with me.”

She said her friend “Yo-Yo” was “passionate about her friends and family.”

Justin-Jinich also was remembered as bright and compassionate.

“She was a very beautiful and kind girl,” high school friend Ryan La Rochelle, 23, told the Courant. “I have no idea how something like this could have happened.”

Click here for more on this story from the Hartford Courant.

FOXNews.com’s Catherine Donaldson-Evans and The Associated Press contributed to this report.