I am so proud of Canada right now: From Canada’s National Post hat tip Grace 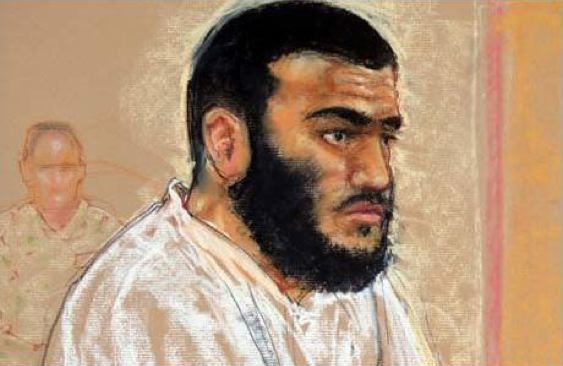 Omar Khadr at a hearing at the U.S. Military Commissions court for war crimes, at the U.S. Naval Base, in Guantanamo Bay, Cuba in a court sketch.
Photograph by: Janet Hamlin, AFP/Getty Images

OTTAWA — The Harper government is appealing a court decision ordering it to repatriate Canadian Omar Khadr from the Guantanamo Bay prison.

The government said it would not offer additional comments since the matter was before the courts.

Khadr was first arrested in 2002 and charged in connection with the death of a U.S. soldier..

But lawyers for Khadr, 22, have argued he was used as a child soldier and should be considered as a victim of war since he was only 15 at the time of his arrest.

In the Federal Court ruling last month, Justice James O’Reilly issued a stinging decision that chastised Ottawa at every turn for its failure to help Khadr during years of “mistreatment” at the U.S. military unit in Cuba.

O’Reilly concluded the “ongoing refusal” to pressure the U.S. government for Khadr’s release violates his charger rights and Canada’s international human rights. He also noted the U.S. has granted requests from other countries for the repatriation of prisoners.

“The principles of fundamental justice obliged Canada to protect Mr. Khadr by taking appropriate steps to ensure that his treatment accorded with international human rights norms,” O’Reilly wrote in a ruling that dismissed every federal argument.

“To mitigate the effect of that violation, Canada must present a request to the United States for Mr. Khadr’s repatriation to Canada as soon as practicable.”

O’Reilly’s ruling took into account Khadr was given no special status as a minor even though he was barely 16 when he arrived at Guantanamo Bay in October 2002, and he had virtually no contact with anyone outside the military camp for two years before he met with his lawyers for the first time.

But Prime Minister Stephen Harper has maintained Khadr was accused of “serious crimes.”

Harper has said also said he does not buy the argument Khadr was a child soldier because he was not a member of an army when he allegedly committed his crime.

But those arguments were rejected by O’Reilly, who concluded the government had violated several international protocols, including the Convention on the Rights of the Child and the Optional Protocol on the Involvement of Children in Armed Conflict.

In an e-mail, Nathan Whitling, a lawyer for Khadr, said Harper’s position contrasts with the Obama administration’s plans to shutdown the military prison.

“We’re disappointed that Prime Minister Harper refuses to be part of the solution to the Guantanamo problem faced by President Obama,” said Whitling, who is based in Edmonton. “This appeal is grounded upon the view that the Government of Canada may participate in the torture of a Canadian child without consequence.

Liberal foreign affairs critic Bob Rae said he was disappointed but not surprised by the government’s decision.

“It’s not the courts alone that have the responsibility to uphold the Charter of Rights and Freedoms. Governments as well have this obligation,” Rae said in an e-mail released by the Liberals. “The Conservatives are forcing citizens to take them to court, and when these cases go badly, (they) launch appeals.”