The Star Spangled Banner Was Originally About Subduing Muslims In Battle 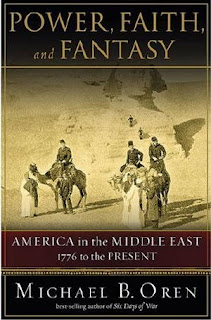 Well, what do you know. The original Star Spangled Banner was about victory in the War against the Barbary Pirates (read Muslims).

From Her Royal Whyness (with special thanks to Democracy Broadcasting):

given by historian and author Dr. Michael Oren, here .

Quote from the end of the lecture (he’s a real tease, that one) :

“Why the original lyrics of the ‘Star Spangled Banner’ talked about Muslims bowing down to the victorious flag of the United States.”

Well, it turns out the Star Spangled Banner was originally written for Bainbridge and Stephen Decatur in 1805.


In it, the lyrics included phrases:

“turbaned heads bowed”
“for the brow of the brave”
“In vain frowned the desert,”
“To a far distant shore, to the battle’s wild roar, ”
“And pale beamed the crescent, its splendor obscured ”
“By the light of the star-spangled flag of our nation.”

Notes from Power, Faith, and Fantasy: America in the Middle East 1776 to the Present by Michael B. Oren

William Bainbridge, who was the first American sailor to the Ottoman capital September 1800, sailed to Algiers on “George Washington.”
Hassan Dey made him transport goods to Turkey – a humiliating experience. He was treated well in Istanbul by Ottomans. Bainbridge was discouraged by the treatment of Americans and because Americans were still paying tributes to pirates. “I am sure they would not long be tributary to so pitifull a race of Infidels.”
Thomas Jefferson decided to order ships to fire on pirates. The war with Tripoli began on May 14, 1851. (Tripoli declared war.) This was the First Barbary War.
The Star Spangled Banner, which was originally written for Bainbridge and Stephen Decatur in 1805, said “turbaned heads bowed” to the “brow of the brave” and “the star-spangled flag of our nation.”

When America was involved in the War of 1812, no resources were available to fight the pirates. Finally, after the war, on May 15, 1815, Madison authorized conflict, and this began the Second Barbary War. They first engaged Algiers on the sea. Algiers lost and paid the US a large tribute. The US also received compensation from Tunis and Tripoli, which was a source of national pride for Americans.

The Star-Spangled Banner
“This Song was written by Francis Scott Key. After burning Washington, the British advance towards Baltimore, and were met by a smaller number of Americans, most of whom were captured and taken to the large fleet, then preparing to attack Fort McHenry. Among the prisoners was a Dr. Beames, an intimate friend of Mr. Key. Hoping to intercede for the doctor’s release, Mr. Key, with a flag of truce, started in a sail-boat for the admiral’s vessel. Here he was detained in his boat, moored from the stern of the flag-ship, during the terrible bombardment of twenty-five hours, and at last, seeing the “Star-spangled Banner” still waving, he seized an old letter from his pocket, and on a barrel-head, wrote the following stanzas:

I.
Oh! say, can you see by the dawn’s early light,
What so proudly we hail’d at the twilight’s last gleaming,
Whose broad stripes and bright stars thro’ the perilous fight,
O’er the ramparts we watch’d, were so gallantly streaming;
And the rocket’s red glare, the bombs bursting in air,
Gave proof through the night that our flag was still there.
Oh! say, does that star-spangled banner yet wave,
O’er the land of the free and the home of the brave!

II.
On the shore dimly seen thro’ the mist of the deep,
Where the foe’s haughty host in dread silence reposes,
Where is that which the breeze, o’er the towering steep,
As it fitfully blows, half conceals, half disclose?
Now it catches, the gleam of the morning’s first beam,
In full glory reflected, now shines in the stream:
‘Tis the star-spangled banner, Oh! long may it wave,
O’er the land of the free and the home of the brave!”

[Source: S.B. McCracken (ed.), Michigan and the Centennial; Being a Memorial Record Appropriate to the Centennia Year 48 (Detroit, 1876)]

Our fathers who stand on the summit of fame,
Shall exultantly hear of their sons the proud story,
How their young bosoms glowed with the patriot flame,
How they fought, how they fell, in the blaze of their glory.
How triumphant they rode o’er the wondering flood,
And stained the blue waters with Infidel blood;
How mixed with the olive the laurel did wave,
And, formed a bright wreath for the brows of the brave.

Then welcome the warrior returned from afar
To the home and the country he nobly defended,
Let the thanks due to valor now gladden his car,
And loud be the joys that his perils are ended.
In the full tide of song let his fame roll along,
To the feast flowing board let us gratefully throng,
Where mixed with the olive the laurel shall wave,
And form a bright, wreath for the brows of the bravo.

I was stunned to learn this bit of history of the “Star Spangled Banner”. There’s more that Michael Oren hinted at . . .here I transcribe the final moments from the very end of the video linked above (marker 41:27) Michael Oren states:

“One of my major inspirations for the book was to share the fascination with this extraordinary story to tell you why the original lyrics of the Star Spangled banner talked about Muslims bowing down to the victorious flag of the United States. . .why the original Statue of Liberty showed a veiled Arab woman holding a torch . . .you’ll have to read the book to answer those questions.”

snip
“But, at the end of the day the inspiration, the impulse was to create a context. A context of history. A context of the past in which Americans who today, as much as any time in our history, will have to make some very important decisions in the Middle East. Context of the past, in which you, all of you can begin to chart your future. Thank you.”

I haven’t even begun to explore the “Statue of Liberty” information yet.

Question . . .why is it that this is the first time I’m hearing about this? This information should be part and parcel of our children’s history books!

UPDATE – Apparently, the song was originally called “When The Warrior Returns”. It is written about on this site which pays tribute to the history of Memorial Day.

On this Google search page, you will find a link to Encylopedia.com, where you will find a discussion of the fact that the Star Spangled Banner melody was used for When the Warrior Returns (if you want to sign up for the free trial).