WASHINGTON (CNN) — The Obama administration told a federal court late Friday it will maintain the Bush administration’s position that battlefield detainees held without charges by the United States in Afghanistan are not entitled to constitutional rights to challenge their detention. 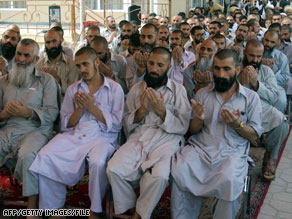 Former detainees pray near Kaubul in 2005 following their release from U.S. custody at Bagram Air Base.

“Having considered the matter, the government adheres to its previously articulated position,” said a Justice Department document filed in federal court in Washington.

In a controversial 5-4 vote, the Supreme Court last year ruled that detainees held at the U.S. naval base at Guantanamo Bay had a right under the constitution to challenge their continued detention. However, the court did not say whether it applied to prisoners in other locations abroad, including Afghanistan.

Five prisoners held at Bagram Air Base, backed by human rights groups, have gone to court to claim the same rights as the men detained in Guantanamo Bay.

The new administration, which was given a month by a federal judge to declare whether the government wants to change its position, has now indicated it will continue to argue that it is against its security interests to release enemy combatants in a war zone.

Barbara Olshansky, lead counsel for three of the detainee petitioners, said that the administration’s decision was “deeply disappointing.”

“We are trying to remain hopeful that the message being conveyed is that the new administration is still working on its position regarding the applicability of the laws of war — the Geneva Conventions — and international human rights treaties that apply to everyone in detention there,” she said.

The air base at Bagram, located north of the city of Kabul, houses between 600 and 650 detainees. Most were picked up for suspected ties