Samira Laouni, a federal candidate for the Canadian New Democratic Party (NDP) is running in the riding of Bourassa in Montreal. Touted as the first hijab wearing politician, she hopes to bring a better understanding of Islam and increased cultural tolerance and ethnic diversity to this troubled area. Working on behalf of the Muslim community in Montreal, she was part of a delegation of women who went to Herouxville, Quebec to participate in an inter-cultural dialogue exhange with local residents during the highly publicized and controversial “reasonable accommodation” debates of 2007.

Working from this theme, she worked closely with the Canadian Islamic Congress under the umbrella of the Canadian Muslim Forum, Both are grassroots organizations focused on Islamic issues promoted within Canadian society. Under the direction of the CIC and by extension the CMF, she presented a brief to the Bouchard-Taylor Consultation Commission detailing concerns and providing recommendations on behalf of the Muslim community to be considered in their final report.

It is not unreasonable for any ethnic community to concentrate on concerns specific to their community. It is even less curious that members of these communities illicit support from political candidates and sitting members of provincial and federal offices to consider and value their unique cultural interests and contributions within the broader, societal context. I’m certain that Ms. Laouni differs little from most in her hard working attempt to secure fair and equal representation in Parliament for Canadian Muslims.

The Montreal Muslim News, on the other hand, is more overt in it’s pressure on behalf of asserting “progressive” cultural relativism and it’s linking to Canadian political/social policy. Much of this is revealed in an article published today on the Election 2008. The author proceeds to rate all federal parties on their ability it would seem, as who is best suited to court and appease Islam.

What sets Samira Laouni apart from most other political candidates representing ridings with high visible minority populations with legitimate and reasonable concerns, is her past and perhaps ongoing affiliation with both the CIC and CMF organizations. Muhammed Elmasry, president of the CIC was quoted to say of Ms. Laouni’s contribution in the reasonable accommodation debate ” She was instrumental in writing Muslim views and her actions were positively achieved. I hope voters will be blind to her hijab and judge her on her qualifications and ability to represent them.”

Although the CMF is more restrained, both groups show an anti-semitic undertone and a toxic mix of distaste and hatred for both Israel and the United States. The CIC in particular, is fixated on perpetuating false information and historical inaccuracies to it’s readership concerning the Israeli/Palestinian conflict and Islamic achievement and has repeatedly called upon both the federal Liberal and Conservative governments respectfully to remove both Hamas and Hezbollah from the list of known terrorist organizations.

The CIC’s list of rhetoric op-eds reads like a rap-sheet for Islamofascism. Support for sharia law in Canada, the endorsement of polygamy as a “family-friendly” policy in Ontario, a bizzare endearing essay on Robert Mugabe, the initiative to pressure government to re-evaluate or discard completely anti-terrorism legislation and ‘no-fly’ lists, obsessive tracking of all Canadian media for Islamophobic content and pursuing multiple HRC’s as the primary complainant to prosecute the Maclean’s/Steyn case. Is Muhammed Elmasry’s endorsement of Ms. Laouni’s work a positive sign or should she be embarrassed?

Ms. Laouni’s candidacy should not be above the same scrutiny that has been issued to candidates of other federal parties. Does she hold the same views as the CIC and the CMF? If in fact she has distanced herself from these Islamist ideologues, does she intend to fairly support her diverse community as a whole by openly discounting their views as non-representative of the majority and incompatible with Canadian societal values? If in fact she remains to have a quasi relationship with radical organizations should this not be made clear to her constituents for analysis?

To be fair in my concern, I also suggest a thorough scouring of the Green Party’s geo-political policy on foreign affairs concerning the Middle East. A clear position is posted on their web-site concerning Canada’s involvement in Afghanistan: “The position taken by the Green Party is thus the correct one; we should serve notice to the U.S. who is using our troops to fight it’s imperialistic wars, that we withdraw our troops ASAP next year but we keep a number in strictly non-combat roles to help rebuild infrastructure in Afghanistan”.

Qais Ghanem, a Green Party running candidate in Ottawa South quips 9/11 as the “Big Event” claiming the hijackers were Saudis with box cutters, none being Iraqis or Afghans. He also wonders on his blog entry why building 7, not attacked at all, collapsed like a controlled demolition? This shows that a ‘9-11 truther’ has managed to run for public office within Canada’s left leaning Green Party. Speaking of which, here is Green Party leader Elizabeth May, you can catch her here in a flattering photo attending a pro-Hezbollah rally in 2006. 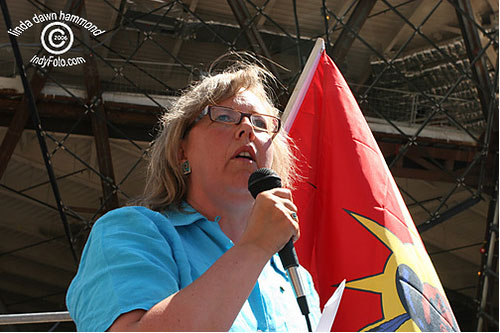 I simply ask this: Has the left in this country gone completely nuts? Why the holy alliance with Islamists? To what benefit would this possibly serve Canada’s interest and the security of her people? I can only assume a pure tactical rationale to curry favour in the name of cultural relativism for increased membership. Has anyone thought to ask Ms. May to explain her presence at this notorious rally? This is one instance where the grass is definitely not greener on the Green side of the fence.

10 Replies to “Islam, politics and the Canadian left in the current federal election”