The sad fact is the opposing forces are likely in 2 camps. The naive who don’t know that the Nazis ARE the Muslims and the ones who are actively colluding with the Muslims to help take down western civilization.

(hat tip to Jude)
COLOGNE, GERMANY
‘Anti-Islamification’ conference marred by protest
19. September 2008, 15:48 Uhr
Stone-throwing protesters have prevented a nationalist group from holding a news conference opening its “anti-Islamification” meeting on a boat in Cologne. It was not immediately clear if anyone was injured. 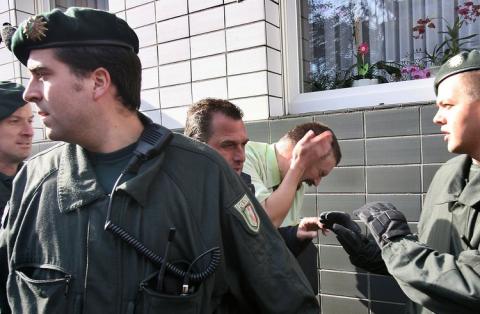 Foto: DPA
Member of Pro-Cologne executive board Bernd Schöppe (2nd from right) grabs his head after being attacked by an anti-Pro-Cologne demonstrator on Friday, September 19 as police step in. The rightest conference held in Cologne has been marred by protesters.

The demonstrators had already targeted a previous venue where the Pro-Cologne rightest group had hoped to hold the news conference Friday for the starting the congress, which was to attract support from nationalist groups across Europe.

The three-day nationalist meeting is to include plans for a big protest Saturday against the construction of a large mosque in the western German city. Police are expecting several hundred people at the nationalist protest and up to 10 times as many at counter-demonstrations.

City officials, churches, labor unions and left-leaning political parties have organized protests throughout the weekend. Dozens of local bars and cafes are also joining in, using the name of the city’s local brew, Koelsch – called “No Koelsch for Nazis“ – for a protest that aims to block nationalists from Cologne’s downtown square.

Experts say nationalists are using the mosque issue to mask their real intentions – founding a right-wing political party that is attractive to Germans who fear a growing immigrant population.

One Reply to “German Anti Islam confrence marred by protest”