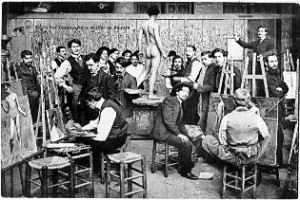 The process of drawing the human figure from the observation of a live model is arguably the most difficult subject an artist commonly encounters. It is a fundamental in all figurative art and is considered the most useful tool to develop strength of skill through visual problem solving. Estimation of line, shape, tonal value, volume and proportion are all key elements, learned from drawing from a live model. This has been a western tradition since the time of the ancient Greeks.

So, what happens when a Canadian university is challenged to alter the course content of the fine arts cirriculum and asked to provide an alternative to drawing nude models to accommodate Muslim students who were “forced to choose between their love of art or their devotion to Islam”?

In early 2007, the University of Western Ontario’s fine arts department responded to this request by considering it an ureasonable demand and attached a note clearly notifying students that live, nude models would be used as a regular part of the figurative drawing class. Dismayed, some sought counsel from the university’s resident mullah and were advised by him not to participate in these exercises as nudity is not acceptable in Islam.

This is seen as a general failure to accommodate Muslim sensitivities by asking that adherents to Islam follow “inflexible” academic policies and legal codes that are often at odds with religious obligations. Instances such as these are prevalent in Canada on and off the campus.

A task force has been created to combat islamophobia across Ontario universities and colleges. Members of the task force serve as panelists who travel to campuses across the province receiving statements from students, staff and faculty. I was not surprised to learn that of the 10 members, vice president Wahida Chisht Valiante of the Canadian Islamic Congress is on board the Muslim Caravan of Vice and Virtue. Dr. Elmasry, her colleague at the CIC scours the Canadian press for wicked infractions to Islam, while his vice-president scrapes schools for racism against Muslims. www.noracism.ca has a link to the task force making for handy reference material for anyone wishing to sample their directives. I wonder if the various human rights commissions will receive new fodder?

The validity of drawing from the live, nude model is rarely disputed with the overwhelming majority of academia approving of it’s importance and necessary function. Nudity in art is no stranger to contempt and controversy from the religious set. True Renaissance man Michelangelo and his magnificent ” David” of 1504, confronted this head on as the brilliant statue served to entice the clergy toward a better tolerance for the human, creative spirit. In his defiance and artistic mastery, the world would receive some of the most magnificent works of art which remain today and later benefit from the development of the western ideal of freedom of expression. In oppositional Islam, the artist is considered among the worst kind of infidel according to the following two hadiths:

“those who paint pictures would be punished on the Day of Resurrection and it would be said to them: ‘ breathe soul into what you have created'”. ( Sahih Muslim vol.3, no. 5268) and,

” verily the most grievously tormented people amongst the denizens (inhabitants) of Hell on the Day of Resurrection would be the painters of pictures” (Sahih Muslim vol.3, no. 5271).

It should not be surprising then, to see Islamic fundamentalists and their apologists clamor for creeping sharia in western institutions.

Western University’s responsibility is to educate. It should not be positioned to alter academic quality and policy for religious claims nor bullied into submission by task forces seeking to use islamophobia as a means of implementing sharia law. Students at the university level are expected to make informed decisions for their own education, to pay for it and function from it. Muslim students, like any other, are faced with a responsibility to understand the secular setting and become informed of course content. They are also faced with a choice: either attend the drawing class and work to pass, or don’t attend and accept a failing grade. To antagonize and disrupt with whitewashed requests for sharia followed by defensive calls of racism should be met with opposition and derision from those whose primary goal it is to teach and to learn.

2 Replies to “The naked truth”