1. Still no news on the house the blew up in Greely On. near Ottawa this summer. Police admitted it was deliberately set but started calling it a fire although the explosion was heard up to 7 miles away. It flattened 3 buildings in seconds. Some fire.

It has been about 6 weeks since any new information has been released on this.

MPs from across the political spectrum have called for more research into the attitudes of young Dutch Turks to the Islamic State, after a poll of 300 showed 80% saw nothing wrong in jihad, or holy war, against non-believers.

The research, carried out by the Motivaction group in Amsterdam, was commissioned by the Forum multicultural institute. During a parliamentary debate on integration issues on Wednesday, Socialist, D66 and CDA MPs called for a special sitting to investigate why youths have such radical views, website nu.nl reports
.
3. Pastor, three others killed in Mombasa

There were unconfirmed reports from Mombasa on Monday night that youths wearing army fatigues went on a killing spree, leaving four people dead.

The bodies were taken to Coast General Hospital. In one incident, a pastor who was waiting at a bus stop with four women was accosted by the youth and chopped with machetes.

He was cut in the back of his head and in his hands and left sprawled on the ground bleeding. He died on the spot. […]

A relative of another victim said the youths, who were wearing army fatigues, also carried a black flag.

The Independent Police Complaints Commission said the South Yorkshire Police officers whose conduct will be investigated were all identified through the Jay Report.

The report, published in August, found that more than 1,400 children had been subjected to child sexual exploitation in the town between 1997 and 2013.

In her report, Professor Alexis Jay criticised the way in which South Yorkshire Police and Rotherham Council dealt with complaints from teenage girls who said they had been raped and trafficked by gangs of mainly Asian men.

The IPCC said the officers are part of a group of 13 referred to the watchdog by South Yorkshire Police. Nafees Hamid, 51, had denied a total of 15 charges relating to 10 women between 2009 and 2013 at the city’s Queen Elizabeth and Priory hospitals.

A jury at Birmingham Crown Court convicted him of assaults on six patients.

In passing sentence, the judge said it was “the most extreme breach of trust”.

Judge Patrick Thomas QC, who heard that Hamid will now be struck off, also ordered him to sign the sex offender register for life. 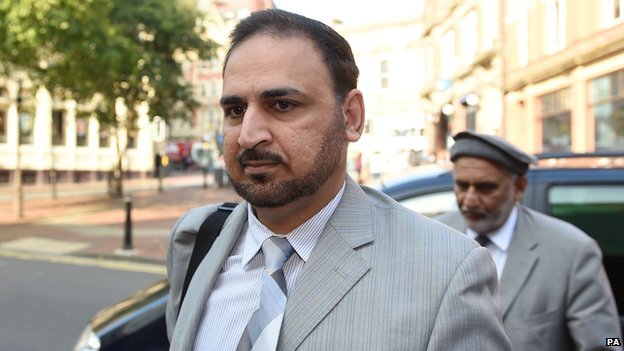 I think it is important for us all to begin to think in terms of social trust and the injection of millions of muslims into our various nations and cultures. Muslims seem to want to destroy that social trust either by design or by mere cultural differences. Either way, its an issue that needs to be addressed directly and I hope to bring it up on tonight’s BlogTalk radio at 8:30 ET.

Thank you M., Wrath of Khan, Nicolai Sennels, Buck, UK Pete and all. More to come.