1. Really looking forward to an explanation for this:

Wells Fargo, 3rd lgst bank in the US is telling Cdn acct holders their accts will be closed in 30 days. No resons given. All services to Cdns cancelled. Ask why and they shrug their shoulders. Banks always want more accts. ?? US tourism needs CDN $. Is the Cdn govt behind this?

2. What do you do when you find yourself in near total agreement with a general in Iran’s IRGC?

3. OK follow me for a minute here. This may be a tough one.

When the Breathalyzer first came out for testing motorist’s ability to drive, I was against it. In fact, I felt it was tantamount to  racism. The reason being that you were determining if a person was in a certain demographic and making them a criminal for no actual action or deed of theirs, but only because you determined that people in that demographic are more likely to cause a crime. You were a criminal in potential, which is the argument that groups that claim to represent black people make. Clear discrimination based on demography and potential. rather than the actions of the individual in question.

What makes more sense to me back then, and frankly still, was the old fashioned tests you see in movies. A person is driving erratically, and they are pulled over and made to do a series of tests to determine their ability to do basic hand eye, reflex speed and so on. If they can’t then they should be arrested and tried for being in control of a motor vehicle while physically unable to operate it safely, no matter what the cause. Anti-depressants, legal opiates prescribed properly, or marijuana, the stench of which is now ubiquitous on the streets of Canadian cities. Or even health issues that the driver was aware of at the time of starting the car.

What I didn’t see, was the slippery slope aspect. 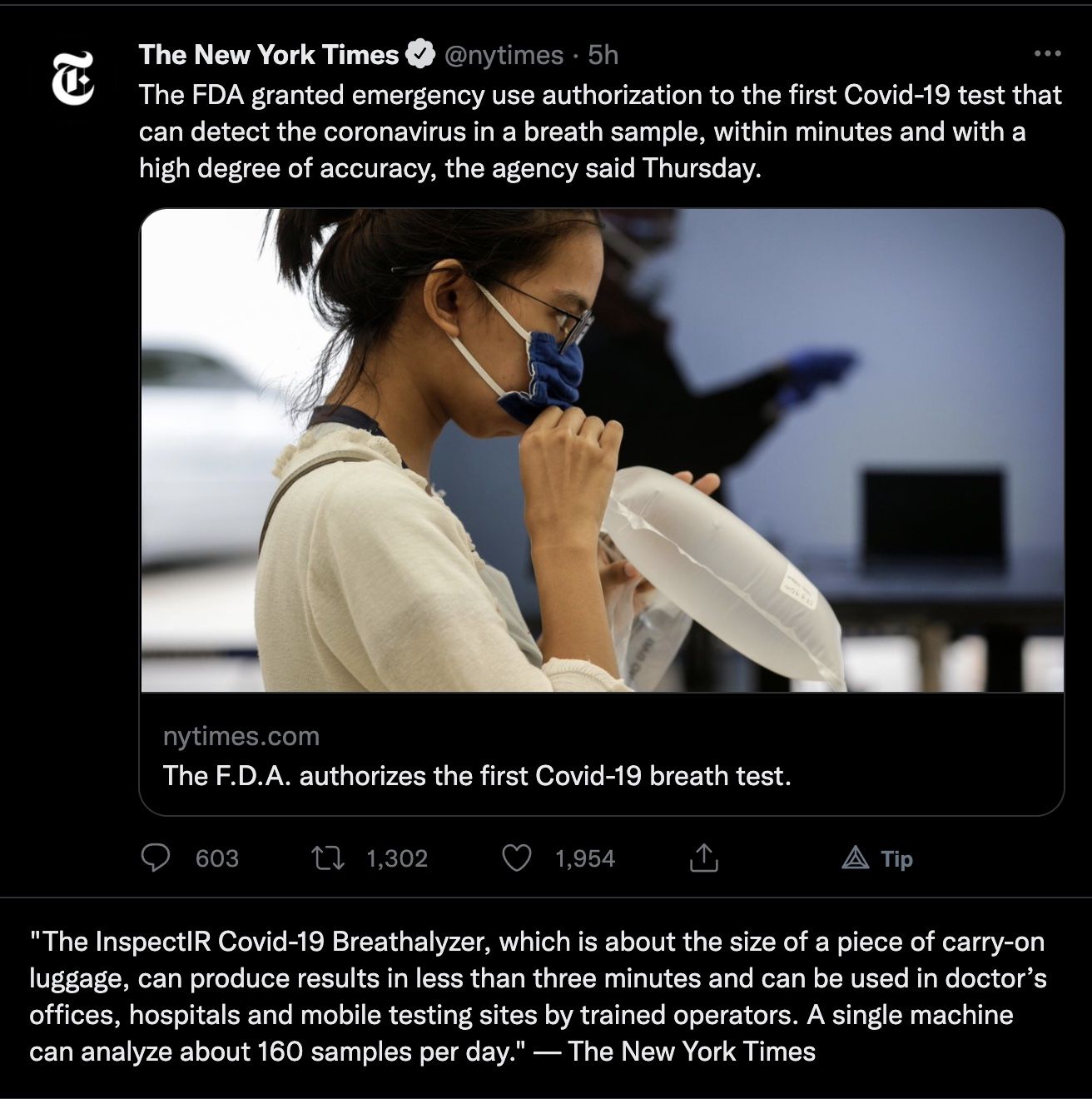 The questions write themselves. How accurate is it? How will this be used? Will people be stopped in their day to day activities and be given this test, and if the black box determines you have Covid, will your rights-come-privileges be suspended and you will be a ward of the state till you pass this test? There is something deeply wrong with the existence of this device. Its deployment may be an added convenience at first, but so will digital currency.

Marina Glogovac, the newly-minted CEO of the Toronto Star, has publicly stated that she considers vaccine passports to be akin to communism, and that she will not support any establishment that asks her for proof of vaccination.

(If she deleted her tweets and had to change her public view, its not “like communism”. It just is.)

5. Alex Berenson: The NY Times says Tommy Lanza, 41, died of Covid. So why does his obituary specifically say he didn’t?

And even after two years, why is finding anyone under 50 who died of Covid (and wasn’t profoundly obese or ill) so hard?

On Tuesday, the New York Times offered what feels like its 12-millionth sob story about Covid, the disease worse than all the others.

This time, the Times wrote about grandparents forced into raising their grandchildren following the Covid deaths of their own children. […]

Here’s what the report actually said. First, the Covid Collaborators didn’t count parental deaths at all. They guessed how many people who died of Covid might have had children, based on national household surveys.

Ignore the fact that the number was simply an estimate, though. The report still didn’t say that 167,000 parents had died of Covid. It counted the number of children who had lost “parents, custodial grandparents, or other caregivers.”

The number of children who had a parent die was about 70,000, according to the report. But that figure doesn’t translate into 70,000 parents dying either. These were kids, not parents – meaning the death of a parent with five kids would pump the report by five deaths.

So how many parents have died of Covid? The report never offers any estimate – but it appears to be between 20,000 and 30,000. Even that estimate will be biased high. Young people who die of Covid are much more likely to have severe chronic health conditions and thus less likely to have kids. […]

And it is not how Lanza’s death was reported at the time. The local Staten Island newspaper went out of its way in his obituary to explain that he had died of pneumonia, he had NOT died of COVID-19. (It also said he had died at home, not in an ambulance.)

Thank you all for gracing these pages. May you all have a refreshing and meaningful Easter Weekend.

7 Replies to “Why is Wells Fargo shutting out Canadians? IRGC General has a clear vision of the West? More: Links 1, April 15, 2022”