1. In case anyone things the Muslim Pedophile sex-slave gangs isn’t still a thing

Actual texts sent to Ellie last week, shared by just one of many witnesses who will corroborate her story of grooming & abuse. Never approached by Cumbria police in their ‘robust’ investigation which their Chief Constable says found no evidence of grooming gangs in Barrow…. pic.twitter.com/FZc9BIw264

A huge number of freedom protestors marched through Toronto on Saturday while police cracked down against the Freedom Convoy in Ottawa.pic.twitter.com/cGOAVEjpiJ

(Only despotic idiots think this was about trucks, or removing the trucks would stop people from wanting basic rights back)

3. The question of WEF control in the PMO and cabinet control came up in Parliament. Watch what dishonourable evasiveness looks like

Canadian MP cut off during debate of Emergency Act for asking about the infiltration of the @wef into the Trudeau government.
Socialist MP @CharlieAngusNDP calls it disinformation.
You decide – here's the video pic.twitter.com/9RpgFX66Ru

4. Sky News Oz has a few choice words for the Petit Dauphin

5. The woman who was trampled by police horses

So if someone were to start a GoFundMe for this woman… how would that play out? https://t.co/dmkzK4EcWf

Thank you all who participated in the attempt to restore basic human and individual rights to Canadians this past few weeks. The road back to rights will be hard and probably littered with bodies if history is any sort of teacher. Or maybe the governments of Canada at various levels are reading the tea leaves and are planning to move things a few steps back to democracy. But whatever they may be saying now, watch it closely. They have a habit of making the right noises then doing the wrong things.

Today on Dalhousie St. near Rideau where all kinds of barriers to people and checkpoints are, is a rather ironic little advert. This is for a display at the War Museum in Ottawa on the loss of civil liberties resulting from the last use of the War Measures Act by none other than Le Petit Dauphin’s father, Pierre Trudeau. Apparently, some of the violence by the FLQ was also false flags done by the RCMP, but I need more time to look into that before it can be stated definitively. 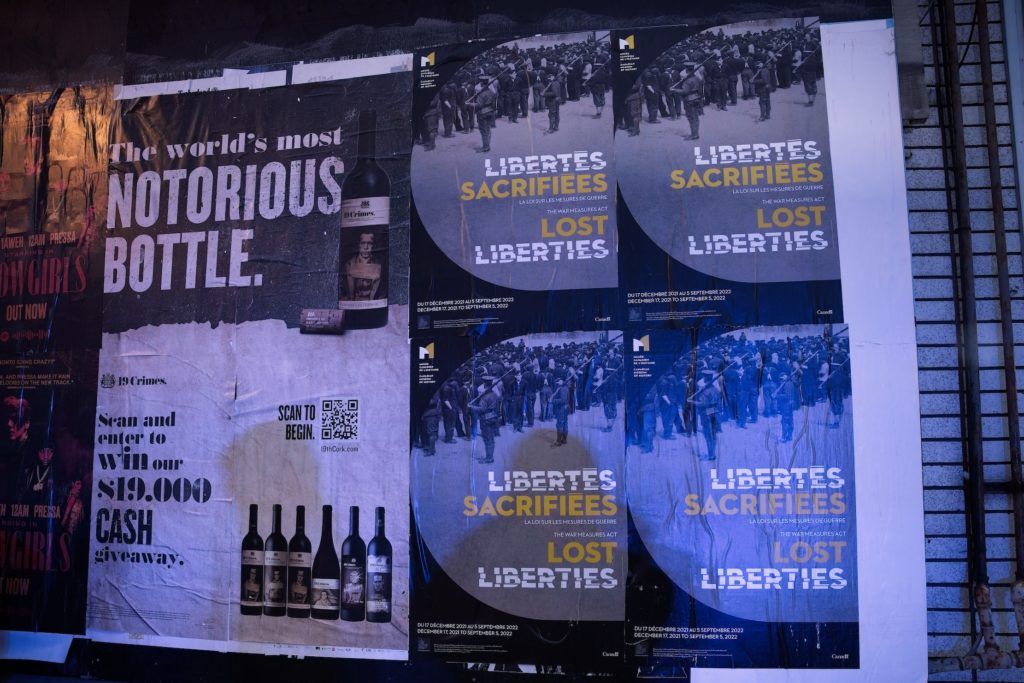