1. This is an amazing coincidence!

Perfect timing for Omnicron (see symptoms below)?. With all heart issues kicking n truth coming out they need a cover that benefits the bioweapon narrative just as we though all along??https://t.co/1ZQU5g8TIK

2. George Soros once did a little essay on what he called, “reflexivity”. If I recall it correctly, (since it doesn’t show up on searches anymore) it was the notion that if you did something, you could predict what the other side would do as a reaction and you could plan for it and take advantage. I’m sure his example was to show how you could break a bank or some other financial thing. But it reminds me of what muslim suicide bombers often do, where they plant a bomb, and then have another series of bombs or other lethal traps ready for the first responders when they arrive to assist the wounded.

Is this an example of reflexivity? Governments putting people in positions where the perceived cost of fighting back against tyrannical Covid measures is lower than the percieved cost of obedience, then setting the army on them? Seems like this was pretty obviously going to happen since the first Gessler Hat mandate.

One wonders why they didn’t just drop the unnecessary curfew and other measures being protested. Well only if you think we live in a democracy.

3. Another 29 year old conspicuously healthy female has a heart attack, coincidentally after getting the Pfizer Vaxx. Must be she smoked dope, or, maybe she was tuned to the wrong TV station or didn’t listen to CBC/CNN enough? yeah that must be it cause 29 year old healthy women get heart attacks all the time. Ask any Cardiologist.

The Bachelor star, 29, claims she had a ‘HEART ATTACK as a side effect of her first Pfizer Covid vaccine’ and insists the complications are ‘not rare anymore’ – but doctors say her symptoms are ‘unrelated’ to the shot

4. Dr. Robert Malone, inventor of the mRNA tech being injected into everyone

In the context of the greater message of Dr. Malone, have a careful read of this tweet by Stephen Coughlin:

This is how to garner extra-legal enforcement of unresearched claims through mass line enforcement. Can't blame delta on the unvax'd. The people who were diagnosed w "Omicron" were x2 vax'd. Scare the mass line into enforcing mandate by intimidating the unvax'd. https://t.co/3nTjRB5mE9

I think it is worth saying again that irrespective of the speculation of truly great men like Dr. Zev Zelenko, or Dr. Michael Yeadon, (former VP of Pfizer) and whether or not this is a cull, or as some speculate, a genocide or an attempt to bring the world population down to some much smaller number of people by mass killing via the vaxx, we would like to offer our own opinion on the nature of these shots.

We should all be noticing that as more and more data comes out showing that these mRNA/DNA shots don’t work, that they fail, and indeed are killing or making very sick large numbers of people, the coercion and threat level towards everyone, at least in the first world, to take them actually goes up.

When the Swine Flu vaccine was rolled out under similar measures, they stopped it when it killed 35 people. Let alone what the VAERS reported for these Covid19 injections, what, 20,000 in the US now? And all agree, VAERS is a gross underestimate. For injuries, as low as 1% make it into the VAERS reporting system. And deaths would be reported more. Perhaps 40% of them are reported according to some doctors I have heard speculate on the matter. This is based on the enormous amount of time and effort it takes to report anything to VAERS, which tends to discourage a lot of doctors as their time is better spent with patients. And the VAERS reportage system is well aware of this.

So why would they increase pressure to take it when more and more conservative scientists are coming out against this technology? Or at least this application of this technology?

Hegel said that the state should be “unto like a God that bestrides the land”. Communism demands that the individual should be subsumed by the state. More, the individual as a very concept, even within the minds of the person, must not exist. There is only the state. And the State is a God to the extent that it can whimsically, mockingly, deride the public and lie to it even as it forces them to accept measures based on those lies and that are terribly bad for the individual. After all, in communism, the innocent individual who dies at the hands of the state should consider himself honoured to have contributed to the greater glory of the state by his death.

I cannot think of a better way to force an individual to submit to the state and its power, and submit to a collective as determined by that state, than forcing people to take a dangerous and ineffective injection. In fact, the very data that this site posts in a curious way, contributes to this process. As the more people distrust the vaccines but take it anyway, the greater the degree of submission to the irrational authority mandating it. One wonders if that is a deliberate aspect of George Soros’ ‘Reflexivity’.

In science one never mass vaccinates during a pandemic or you get tons of resistant variants, which we are getting. This is science as old as Darwin inasmuch as it is basic evolutionary theory. And at no point in history have people who have not been vaccinated against a disease, been a threat to those who have.

We see that in the Fauci video above, there is no reason or logic, science or medicine in his diktat. Unless you run it through a communist to English translation.

And then it reads:

“The problems in society are from the disobedient. The disobedient must be forced to submit to the state for no other reason than the state requires it.”

Then it makes more sense.  Wouldn’t it be nice if Google had this particular ability in its Google Translate option? Maybe we can request it from Deep L.

As we approach the end of the year, I would like to take this opportunity to thank the very many people who have supported this site through this maelstrom. Some by direct financial contributions, some by buying the Cross of Matamoros, all of which helps offset the cost of running this site, and the very many people who post thoughts, stories, links to news items and ideas to the Reader’s Links which help offer us all some tools with which to attempt to see past the gaslight. The only kind of light that actually obscures that which reflects it.

Here are just a few of them and in no particular order: 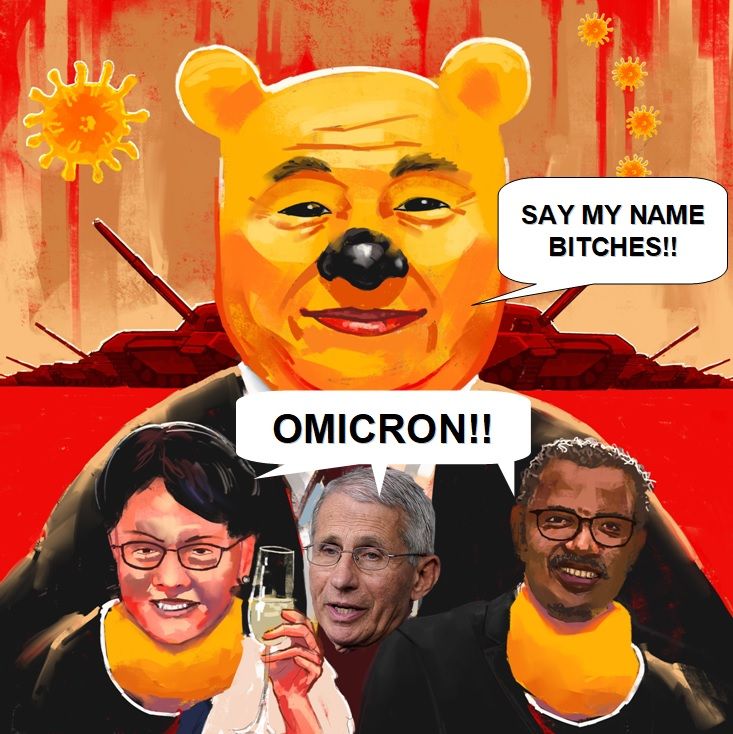 6 Replies to “Another healthy young woman dies of coincidence and more: Links 1, November 29, 2021”