1. New San Francisco Initiative to Pay Individuals Not to Shoot Others

(Because with the left, the illusion is all that matters)

A new program in San Fransisco will pay people at high risk of shooting someone not to pull the trigger to help alleviate rising gun violence in the city.

The Dream Keeper Fellowship is set to launch in October and pay 10 individuals $300 each month to not be involved in shootings, Sheryl Davis, executive director of the Human Rights Commission, told Newsweek in an interview Tuesday.

Davis explained that the program is not “transactional,” but will rather focus on making investments in communities most impacted by violence.

“It’s not necessarily as cut and dry as folks may think. It’s not as transactional as, ‘Here’s a few dollars so that you don’t do something bad,’ but it really is about how you help us improve public safety in the neighborhood,” she said.

(They have been paying farmers not to grow crops for a long time, and recently I have heard that farmers around the world are being paid to burn their own crops rather than let anyone eat them. So I guess we move into Fahrenheit 451 territory where Firemen are paid to burn houses full of books now. For the moment at least, they appear to be paid to not shoot people. But since thats not a reasonable expectation…)

2. Although this Brad Johnson video is from July 20, like the story above, it is an excellent example of the total moral inversion using neo-Marxist terminology that we see everywhere. You can now justify anything with a few buzz words.

Taliban fighters are feeling angry and betrayed Wednesday after discovering that Afghan National Army helicopters abandoned at Kabul’s airport have been rendered inoperable by departing U.S. troops, according to a report.

An Al Jazeera reporter who toured a hangar on the military side of the airport said in a video that the terrorist group “expected the Americans to leave helicopters like this in one piece for their use.”

“When I said to them, ‘why do you think that the Americans would have left everything operational for you’? They said because we believe it is a national asset and we are the government now and this could have come to great use for us,” she continued.

(Yet they hung a guy from one with his arms behind his back and flew him over Kabul. Also, did Biden promise them working helis? Else why would they feel betrayed? Video at link)

4. Brazil Under Attack: The Insidious Plot to Remove Anti-Communist Bolsonaro from Office

(This is an important one. When reading, you can see much more than the connection to Venezuela’s fall to communism. You see the same actors and plots that took out a popular and effective president in the US and put in Mr Magoo with narcolepsy.)

Brazil faces the same fate as Venezuela, where a Communist-infested Supreme Court paved the way for Hugo Chavez to gain power.

Communist Takeover of Brazil: The Insidious Plot To Remove Bolsonaro From Office

The following article illustrates how deeply Brazilian communists have infiltrated institutions to gain power. Unfortunately, many of the same tactics are being used across the globe, including in America. Citizens must vigilantly fight against this threat.

Many thanks to José Atento for writing the following article for RAIR Foundation USA. Mr. Atento is an educator from Brazil.

5. Ontario has announced some form of vaccination which appears to be tantamount to forced.

Today is a sad day in the history of Ontario. The government announced today that it will phase in Vaccine Passports. This is not right! It's time to stand up. The #PPC will fight to repeal all #VaccineMandates and #VaccinePassports. #votePPC #PPC2021 #Freedom #InformedConsent pic.twitter.com/IDB1ywn8SP

Thank you ML., M., Richard, PePi, Brad Johnson, Hellequin GB., MissPiggy, Gates of Vienna, Oz-Rita and many more who are trying to see behind the curtain clearly enough to get a sense of what that carney is doing back there.

The photo below is from a protest at Ottawa’s Civic hospital.

For me, it raises one question:

If a pregnant woman wants an abortion and has not taken the vaccine, will she be denied her ‘right’ to an abortion?

Serious question even if the answer seems obvious. Our suspicion is it will fit the formula of whatever is revolutionary will happen, whatever is not will not. So yes, she will get her abortion without vaxx, but the man who has worked his whole life and has a responsible position and family will not get his heart procedure or kidney transplant unless he does. 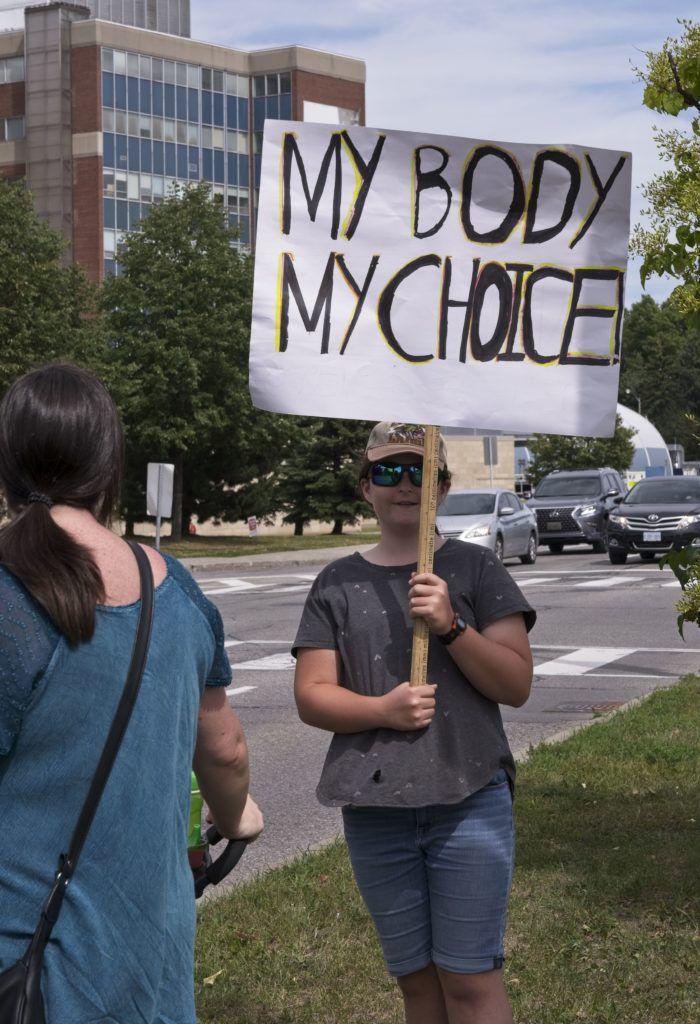