The Arizona Senate is mulling an expansion of the 2020 election audit taking place in Maricopa County.

Senators are considering hiring a California-based nonprofit to analyze ballot images to create a third set of numbers to compare with the tabulation from Dominion Voting Systems machines and the hand recount being done by Cyber Ninjas, a Florida-based firm in charge of the current audit.

If the plan is finalized, the Senate would pay $5,000. The rest of the money would be obtained through a grant or through private funding, Ken Bennett, the former Republican secretary of state who is the Arizona Senate’s liaison for the audit, told The Epoch Times.

The firm being considered is a nonprofit called Citizens’ Oversight. The firm was brought to the attention of the Senate by John Brakey, a Democrat who works for Audit USA and is working as Bennett’s assistant during the audit.

2. Revealed: Chinese weapon scientist has been working at the heart of Cambridge University’s crucial research into new battlefield material

A Chinese military scientist has been conducting research with a team at Cambridge University on a revolutionary substance discovered in Britain.

Dr Junzong Feng, 38, has been working as a ‘visiting fellow’ with Cambridge’s NanoEngineering Group on graphene, a material two hundred times stronger than steel, more stretchy than rubber and which conducts electricity better than copper.

Experts believe it could offer a huge advantage on the battlefield. It was first extracted from graphite by a team at the University of Manchester in 2004.

Dr Feng is dressed casually in an open-necked blue shirt for a photograph used on NanoEngineering’s website but he proudly wore his Chinese People’s Liberation Army uniform for a picture taken in 2016 after winning first prize in a defence technology competition in his homeland.

(This fellow was working on the meta-material, Graphene. The substance that was in the cheap Chinese masks that the Canadian government recalled because they contained graphene, which caused serious respiratory issues.)

3. Controlled opposition, National Post: ‘When do we round up?’ What if the vaccine-hesitant block our hitting thresholds to reopen?

Until now, the biggest challenge limiting vaccination rates has been supply. Soon, it could be the hesitant and reluctant

Canada’s path back to normality hinges on getting enough people vaccinated.

Some provinces have even announced specific targets, including Ontario, where hair salons and amusement parks can reopen when 70 per cent of eligible adults are vaccinated with one dose and 20 per cent with two. Gyms, theatres, bingo halls and indoor dining are allowed once 70 to 80 per cent have received one shot, and a quarter are wholly inoculated.

But vaccine targets are at least partially arbitrary. The threshold needed to achieve population immunity against SARS-CoV-2 is still being debated, the goalposts ever-shifting. Once 60 per cent, now 70 to 80 per cent — and maybe higher. “What if we get stalled at 78 per cent,” said Peter Loewen, professor of political science, global affairs and public policy at the University of Toronto. “Do we just keep holding off? When do we round up?”

(Generally I have difficulty reading or listening to something past a false premise. In this case, it is the following bit of sophistry: “Canada’s path back to normality hinges on getting enough people vaccinated.” No. It doesn’t. To go back to normal all we need to do is, go back to normal. Like every other pandemic short of the Spanish Flu, we just need to do things normally and get herd immunity. Which is the second problem with this article. Let’s say that we decided, which we didn’t, that we had to stay prisoners and poverty stricken until we reached a certain level of immunity. Then do T cell tests and count the naturally immune, which has to be at least 30% or more by now, instead of just the injected which all doctors agree is a much inferior form of immunity than the mRNA injections. The National Post is really just the CBC for people who think its an alternative at this point.)

4. Ontario is planning to extend the emergency measures act until DECEMBER. The vote is tomorrow. People must take note of who votes to extend it.

. @OntarioPCCaucus — my understanding is that you are going to be voting this week on an extension of provincial Emergency Powers until December.

A majority of Ontarians oppose this and you are hereby requested to vote against such a shameless power-grab.

(Back in the early part of this century, or perhaps it was in the late 90s, leftists where howling about global warming as man’d fault and showing phoney and cherry picked data in the papers and. TV every day. Meanwhile, astronomers at NASA noticed that Mars and Jupiter also warmed at the same time and rate relative to distance as did the Earth. This was proof positive that warming was from natural phenomenon, unless burning gas and leaving soda water bottles open causes warming on Mars.

The exact same thing can be applied to lockdowns. Areas that did nothing or ended lockdowns a long time ago, had the same curves as places that implemented draconian measures. Perhaps even better because of more rapid natural herd immunity, which is far better than any kind of vaccine immunity. Like warming on Mars, this should be enough data to end these measures everywhere. But Ontario is pushing for mRNA injections without even testing for T cell immunity. So the only question left is, malice? Or incompetence.

I would put 500 on malice at the top, and incompetence and lack of character for the rest of the way down.)

5. This one we have been delaying posting for several days now. I was hoping to speak with some members of the Armed services on or off record about this one as it seems so bizarre and there are questions of chain of command I would like cleared up. As I understand it, a soldier may not follow an illegal order. So this officer might have been doing the right thing by refusing it and asking others to do so. In fact, it may be required. Which might explain the arcane and antique charge of mutiny he is facing.

Hopefully some members of the Armed Forces can comment. And I hope to get an interview with someone soon.

The Department of National Defence says a military officer is facing charges after allegedly urging other members of the Canadian Armed Forces not to help with the distribution of COVID-19 vaccines.

Officer Cadet Ladislas Kenderesi has been charged with one count of persuading another person to join in a mutiny and one count of behaving in a scandalous manner unbecoming of an officer.

The charges follow a speech at an anti-lockdown rally in Toronto in December in which a man appeared in full military uniform and spoke out against what he called “killer” vaccines.

The man, who is introduced as Kenderesi and is wearing a name tag with that surname in a video of the speech posted on YouTube, calls on other military members to disobey their orders and not distribute the vaccine.

Meanwhile, no charges against this man who was part of an anti-Israel demonstration on May 15, 2021. No idea if he spoke or not. 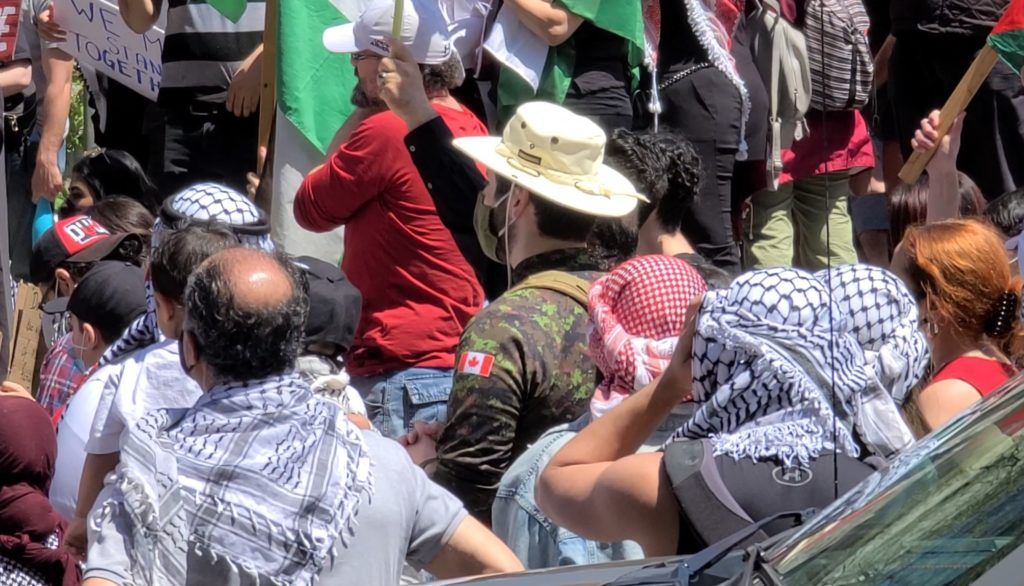 Thank you M., ET., EB., Z., PC., Johnny U. and many more who are appreciated even if I misplace a name now and again.

This new campaign gives some hope.