Love, love, love. It still makes the world go ’round even when burdened by every frumpy cliché.
It is my deep-seated conviction that the Globalist animal is one who is able to shunt any residual love he may hold for those nearest him. There must be something missing–try conscience for starters–in a power-mad Obama, Clinton, Soros etc. Collectivist historical horrors of any means justifying the ends as countless lives are snuffed is not a hard concept to understand. Young George seemed to learn this at an early age. It must be especially obvious for these clever people, and yet they fall into this trap every time. Be their cage bars forged of greed, power or ideology, it matters not.
Love. How does Bill Gates justify his crime against humanity that is perpetuating a false pandemic–along with pushing untested gene therapy–to his children? Has he injected his mystery syrum into his own babies, yet? In the way, way, way back machine before the internet we had Dr. Joseph Mengele. How many Mengeles has it taken to screw in this lightbulb?
I know childless people with more love for their fellow man than many who have children, so this is not the best litmus to knowing who loves thy neighbor.
Conversely, powerful people caring less for the future beyond their own childless mortal coil is not hard to imagine. Installing some new brand of Naziism based on the toys you play with inside your own head is a great hobby when you’re unimaginably rich, powerful, will never suffer from your own decisions, and have a serious screw loose. Indeed, it’s a stone-cold heart that signs up to this dance. The bottom line is our oligarchs suck. This slogan should be written on t-shirts and bumper stickers because it’s true. At least Putin appears to be patriotic. But I digress. I mean only to note the conspicuous frequency of Globalist leaders who thrive in our neoMarxist global garden, and who have bloomed so very childless.
All of this is an overly-long preamble to my love-themed, and money sub-themed Valentine’s Day account. And don’t mistake my observations for being cheap, because I’m not. The money point I’m trying to make is twofold: watch how your purchasing power declines, and watch your food crisis.
It was with love in our hearts that my wife and I eagerly abandoned our children for a night to celebrate this day. (–Love, too, for a deserved night off from our slow-mo life-transforming transition to a more resilient financial stance.) With her birthday falling on this same day the double whammy was all mine. I made a reservation without reservation for a room at the Chateau Laurier in Ottawa. We would be tourists at home. Strangers to our own strange land. Vagabonds to ourselves. Outsiders looking in. How romantic.
In 2013 the hotel was purchased by Larco Investments based in Vancouver. The Wikipedia entry conveniently omits that this iconic Canadian building is now owned by an extremely secretive muslim family:
And also this.
After entering the heavy brass and glass front doors the first hospitality bestowed us was having our body temperature taken through our wrists. I could barely see through the fog on my glasses coming in from the bitter cold. I got 98.6 on my test–haven’t scored this high since I aced a physics test in grade 11. My wife was allowed in, too, even if the greeter thought she was acting cold. Sometimes she comes across this way.
I had not stayed here before and expected a higher-end clientele than what I saw. I expected staid old rich people milling in the ornate main lobby with suitcases and long overcoats. Businessmen and politicians. Actually, I truly expected the place to be completely shuttered under our lockdown, so was surprised to find it was not when I called to book a room. Most of the customers were young and wore plain clothes. It is a beautiful building that registered more to my eye, a time when the lower cost of labour permitted such fine materials and detail. 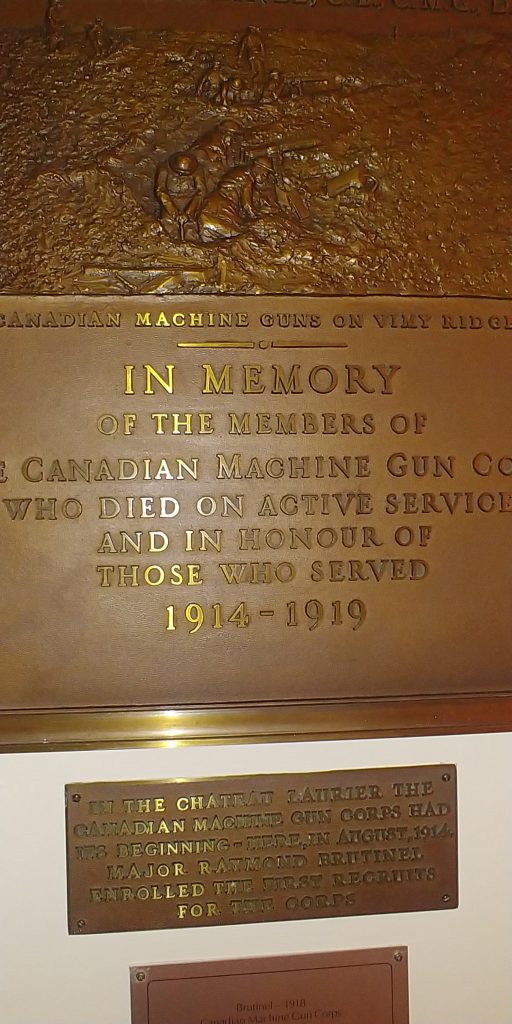 It also is about the same age as the U.S. Federal Reserve which is also old and musty. In 1913 it was created by J.P. Morgan and other bankers after a series of financial panics. The idea was to centralize banking power to better control the economy. I don’t know if this central bank was also created because someone saw the first world war coming, but I bet they did. The bankers also took this opportunity to end the U.S.’s only period of a pure gold standard. During this period the world witnessed the industrial revolution and healthy economic growth without inflation. Since 1913 the U.S. dollar has lost something like ninety-seven percent of its purchasing power via targeted inflation and an ever-expanding money supply.
After throwing our things in our room we took a walk around the downtown. We found a gourmet restaurant not far away that served take-out. We rang the bell and placed our orders. “Come back in forty-five minutes” said the woman. Wandering on we saw the once-vibrant tourist area of the Byward Market now a ghost town of closed bars and shops. We decided to cut through the big nearby shopping center to check out the ice sculptures made every year at this time for the annual winter festival. Walking through the plaza gave us a short respite from the extreme cold. There were social-distancing-warning-signs ordering us to stay six-feet apart seemingly every six feet. The ice-sculpture venue turned out to be a bust this year. –Those icy Wuhan fingers. The festival park was darker than the dystopian pall that cloaked this night. We looped back to our gourmet take-out dinner place, then back to our hotel room for a picnic. My fancy hamburger plus my wife’s rabbit cost sixty dollars. Their take-out containers seemed sad and emaciated sitting on our bed. 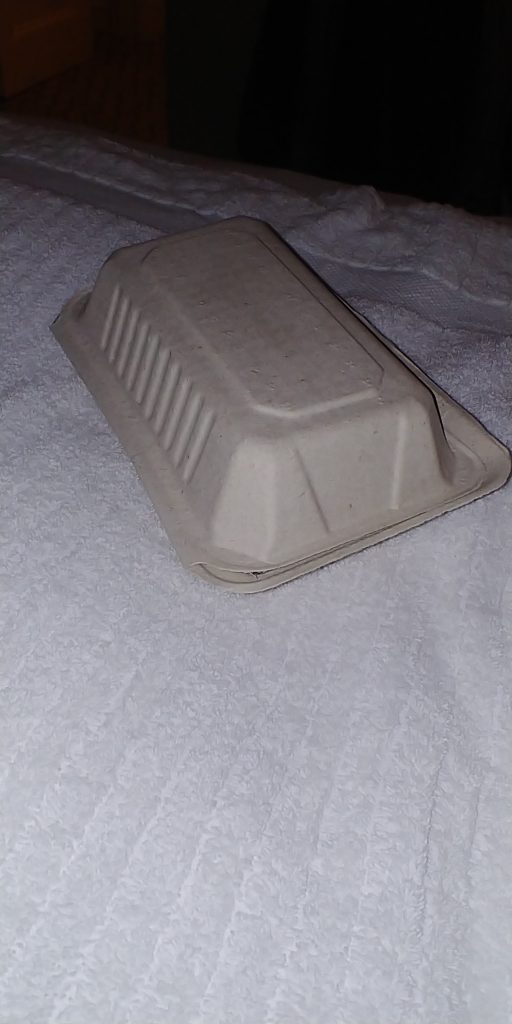 Undaunted, we enjoyed ourselves and revelled in our stunted parental freedom. Our partial view of the Parliament buildings was lovely. Joseph Karsh the famous photographer lived in this hotel for some years. I imagined all the luminaries who had stayed in our room. If the walls could talk I could at least listen. Maybe I’d see a ghost in the night. The ghost of Glory Past.
Morning brought light and more light. We decided to forego the thirty-two dollar hotel bacon and eggs. We would go back to the market looking for a more reasonably-priced breakfast. It took three elevators to get to the main floor. The six-foot distancing rule disallowed joining any ride down if the doors opened and there was already a person inside. The footprints drawn on the elevator floor told us just where to stand. Rebels to our marrow, we defied the dots holding hands.
Into the main lobby another party spilled from the opposing elevator at the same time. They were five younger people having a pretty good time. In fact my first impression of this group of African-Dystopians was they were still drunk from the night before. “You’re not wearing masks,” said my wife to one of the young women. The woman’s hair was dyed bright red. On second glance I realized she wasn’t drunk. Her speech was clear. She was high on something.
“I love it when caucasian women tell me to wear a mask,” the woman shot back.
“Shh,” chorused her friends. I think they were worried their little pistol would start a scene.
Out into the street my wife explained. “Why should they be exempt from wearing masks?”
“Actually, you were both wrong. It’s not your place to be a Karen to enforce a rule that’s wrong in the first place. And it was wrong of her to racialize the moment right away. You both resorted to blunt Leftist instruments and both for wrong reasons.”
“–And they were all high drugs,” my wife replied knowing I was right, but not wanting to acknowledge it right away. “–Not just that one women.”
The bakery we had hoped was open, was closed. We found a muffin shop that served only coffee. Rounding the corner after that we found another open bakery. I stayed outside and waited so I didn’t have to mask up. This place sold Barack Obama cookies, or some other lump of baked shit. (Yes, we were hungry.) Waiting now in the light of day I saw boarded-up businesses and For Rent signs everywhere. 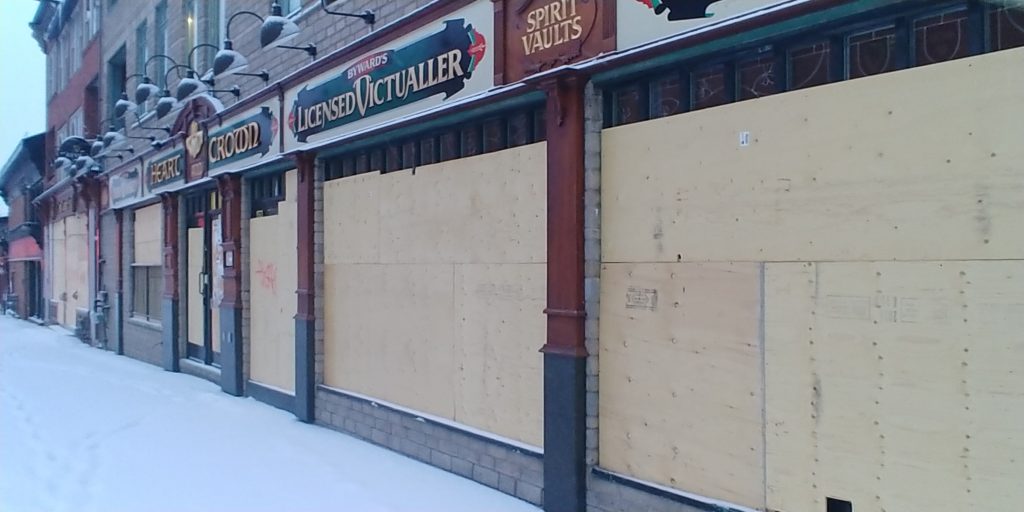 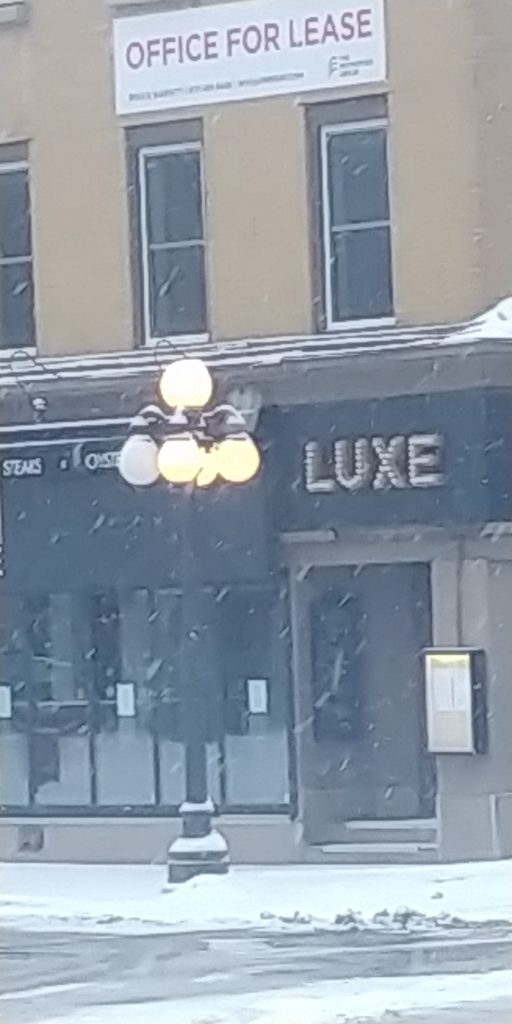 I’d given my wife a fifty-dollar bill. She came back with two scones, two croissants and a baguette. I got twenty bucks change.
Ambling on we saw street posters advertising help for groups and small businesses trying to cope with the pandemic. On a couple of these were placed cancel messages by Leftists. 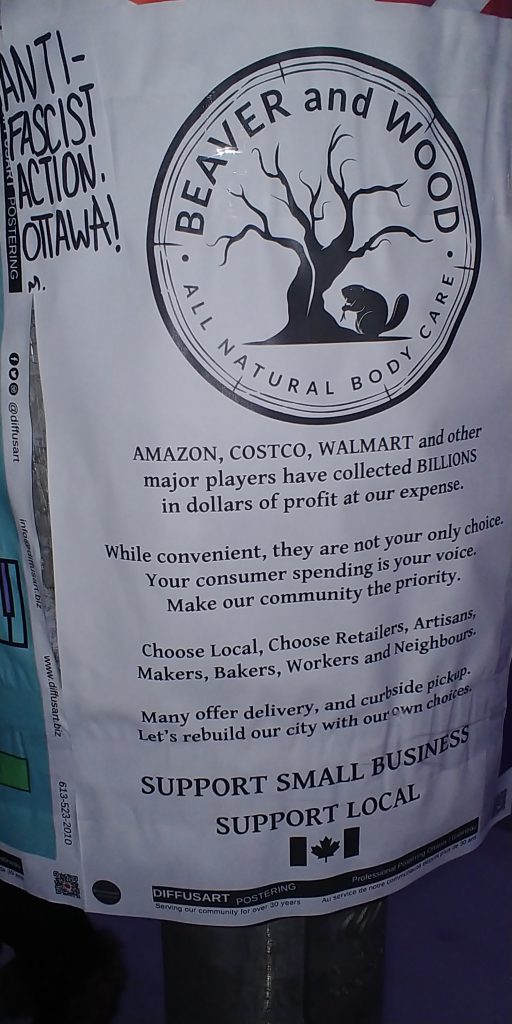 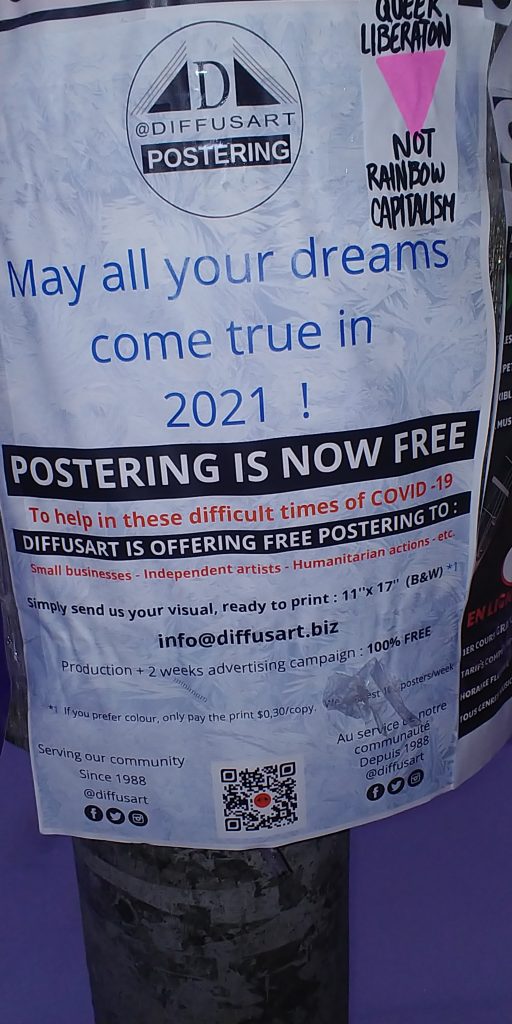 “Anti-fascists” and the Woke of the Dead were clearly on the prowl. There was one poster calling for an end to the police. The Irving Rivers store was selling Dear Leader gay socks. 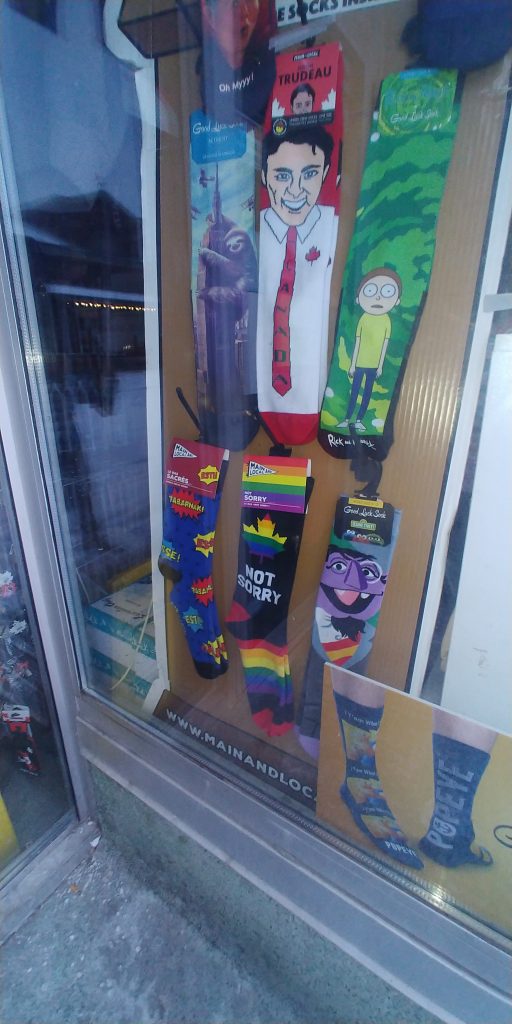 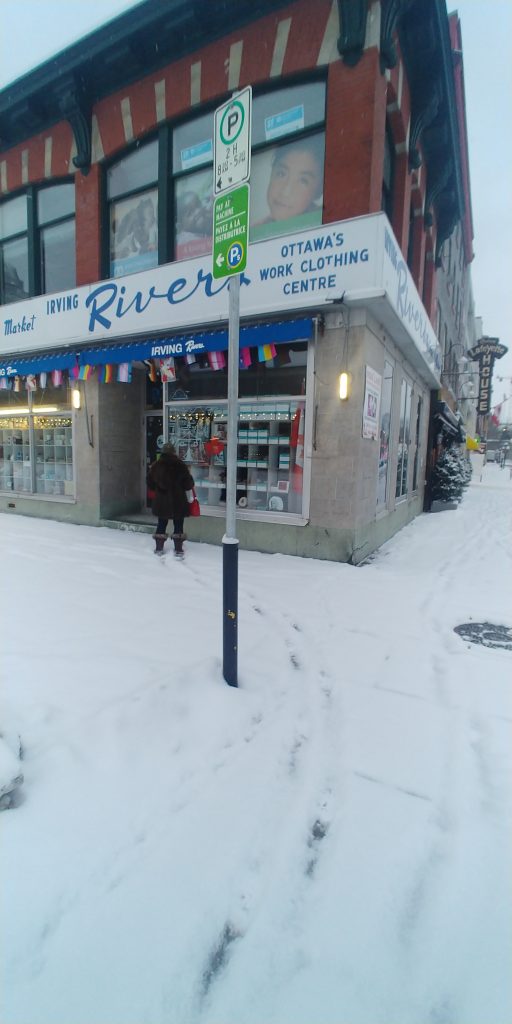 Of course, I use the word “gay” in the happy sense, before its meaning was repurposed by radical political linguists.
Winding our way through these old streets reminded me of another seminal event celebrating its 100-year-or-so anniversary. This was the publishing of Ulysses by James Joyce. That impenetrable novel described a twenty-four hour period of one Leopold Bloom wandering the streets of Dublin. Bloom is cast by Joyce as an outsider on multiple strata. I was beginning to understand. I had not come downtown for leisure since before the pandemic. I am sure there are many people now who can relate to the discombobulation of a Hungarian Jew wandering Dublin.
Insiders transformed into outsiders were we. It only takes a shift in perspective–sometimes a slight change in the light–to see something very clearly that was obscured. I don’t doubt that collectivists are satisfied with the world they are creating. They’ve won, for now. They’ve won until the day their illusion of wealth made from printed fiat so unceremoniously expires. On that day the proverbial frozen Texan windmills stay frozen, and our Sovietization becomes complete. On that day we will pretend to work, our masters will pretend to pay us, and we will also pretend to eat.
On our return home our oldest was baking his mother a heart-shaped cake. It was a sweet gesture from son to mother. The dogs treated us like soldiers getting back from war, their whole bodies wagging in ticker-tape joy. Our younger ones were still asleep. It felt like after you’ve gone ice skating and you slip your boots back on and start walking. It was great to be home even though we’d been gone such a short time. No matter how hard they try I do not believe the collectivists will succeed in breaking the first, most basic bond between people. Infinitely stronger than spider silk, it is simple love.

9 Replies to “A valentine from Wuhan: Fundamentally changing Canada”