2. A little honesty here and there

They want Soviet-style retribution against Trump

Rep. Bill Pascrell (D-NJ) has released a deranged manifesto calling for President Donald Trump to be prosecuted if the ongoing color revolution coup is successful in ousting him from office.

“Donald Trump and members of his administration have committed innumerable crimes against the United States,” Pascrell said.

“He has endangered our national security. He ripped families apart. He poisoned the Census. He has personally profited from his office. He has attacked our elections and sought to throttle democracy. He was rightly impeached by the House of Representatives. He has engaged in treachery, in treason. He has given up on governing and protecting our nation and if he had a shred of dignity he would resign today,” he added.

Pascrell made it clear that Trump must pay dearly for these vacuities and be punished criminally for anything that overreaching Democrat prosecutors can make stick. He also wants other Trump administration members harassed as well for his perverted revenge plot.

3. Two Churches torched in Washington State as the communist-Islamic revolution picks up speed

4. Tucker segment on the attack on the 1st amendment by Democrats. Mark Steyn, the decapitator’s veto

5. Drop & Roll video explains how the election was cheated

Look at this in Michigan! A day AFTER the election, Biden receives a dump of 134,886 votes at 6:31AM! https://t.co/CTDaWTNs29 pic.twitter.com/nSmc2olraF 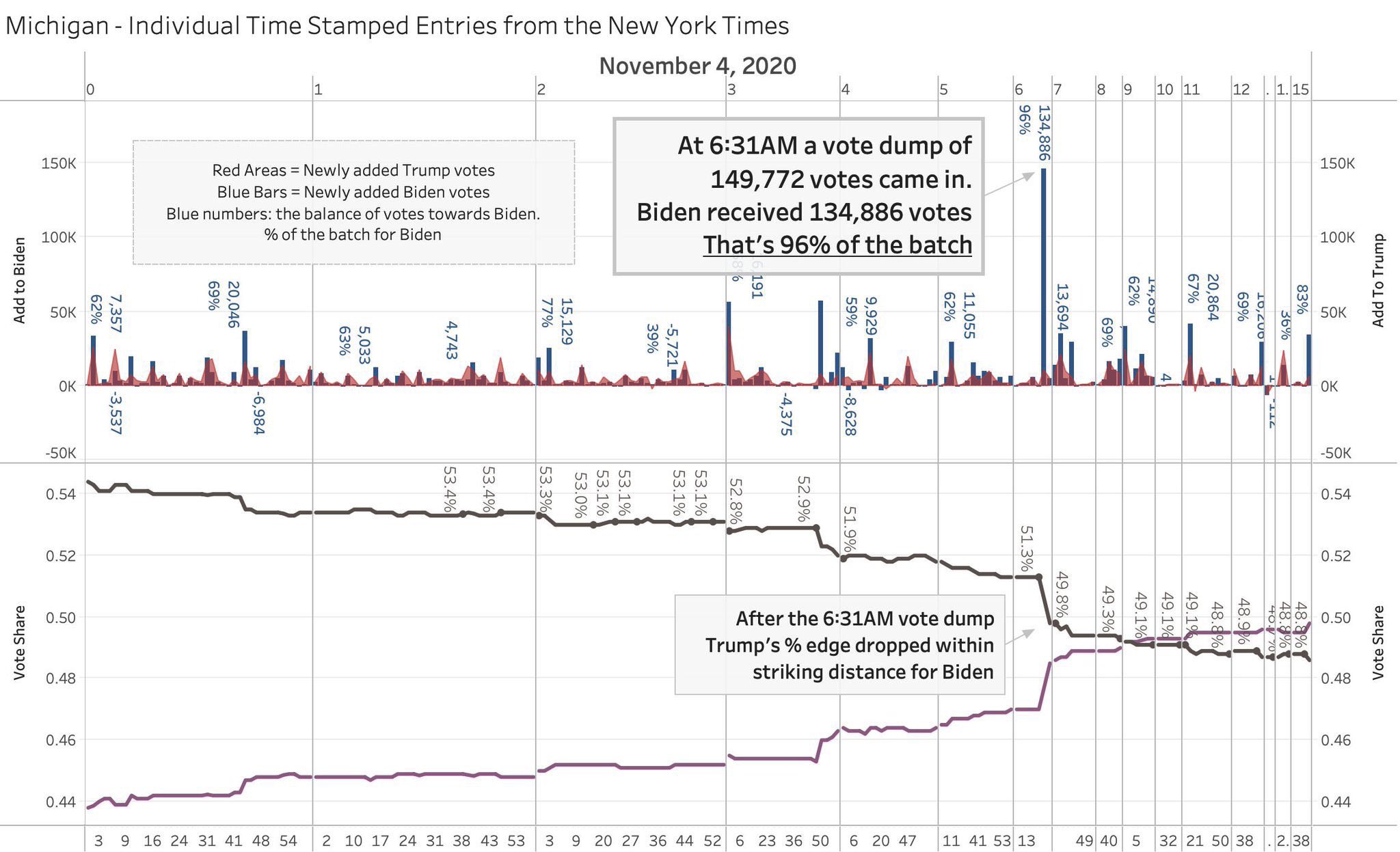 Two Republicans on the Wayne County Board of Canvassers were berated, smeared as racists, and one even had her children doxxed before the pair reversed course on Tuesday night to certify the vote in Michigan’s most populated county.

Abraham Aiyash, a Democrat Michigan state representative-elect, spoke of Republican Monica Palmer’s children and named their school as he berated her for being a “racist.” The Federalist reports:

“You, Ms. Monica Palmer from Grosse Pointe Woods, which has a history of racism, are deciding to enable and continue to perpetuate the racist history of this country and I want you to think about what that means for your kids,” he said, name-dropping the name of their school and talking about the impact her decision would have on their black classmates.

(How is this not a revolution as opposed to an election?)

10. House Republicans call for hearings into violence against Trump supporters at MAGA march

EXCLUSIVE: The top Republicans on the House Oversight Committee are demanding Chairwoman Carolyn Maloney to hold a hearing to examine the violence against supporters of President Trump after the “Million MAGA March” in Washington, D.C. last weekend.

They are also calling for answers from D.C. Mayor Muriel Bowser, claiming her “silence” on the issue is part of a “broader pattern of viewpoint discrimination.”

Thank you all, the many of you who contributed to this post, and all the posts this week.

We hope to finish a very important post tonight about Germany. A well known and well liked Doctor was doing a live stream when police smashed their way into his home in classic Stasi-Nazi fashion. We think it was because he opposes both the Covid measures, as well as the new dissolution of the German constitution that took place today in Germany.

Obama met with Merkel several times after he was voted out of office, didn’t he? Trudeau also. Hmmm.