1. Man arrested in Melbourne Victoria. No idea what for, but the optics are really, really bad.

3. Pickup with Trump sign fired on by man with shotgun: Maryland police

A Maryland man with Biden campaign signs on his yard has been charged with firing a shotgun at two men who honked the horn as they drove past his house in a pickup displaying a large Trump campaign sign.

Baltimore County police said they responded to the incident Saturday afternoon in Kingsville and arrested Douglas Kuhn, 50, on multiple counts of assault. No one was hurt.

Kuhn appeared before a judge Monday and was denied bail, according to Fox 45 Baltimore.

Neal Houk told WJZ-TV that he and his son were the ones in the pickup who honked at Kuhn when they saw him outside putting up a Black Lives Matter sign.

“He reached down,” Houk told the station. “He had a shotgun right there, pulled it out and pointed it right at us. And we were in disbelief. Next thing we heard was a shotgun blast.”

At least two residents who displayed pro-Trump flags and signs on their front lawns in small-town New Hampshire reportedly received letters threatening to burn down their homes if the presidential election did not result in a victory for Democratic candidate Joe Biden.

The letters were received by one resident in Milford, and another in the nearby town of Brookline, both located in Hillsborough County.

Capt. Craig Frye, of the Milford police, told Fox News the department referred the case to the U.S. Postal Inspection Service and the state attorney general’s office, which is conducting an investigation.

A woman who asked to be identified only by her first name, Kelly, showed the letter she received to WMUR. 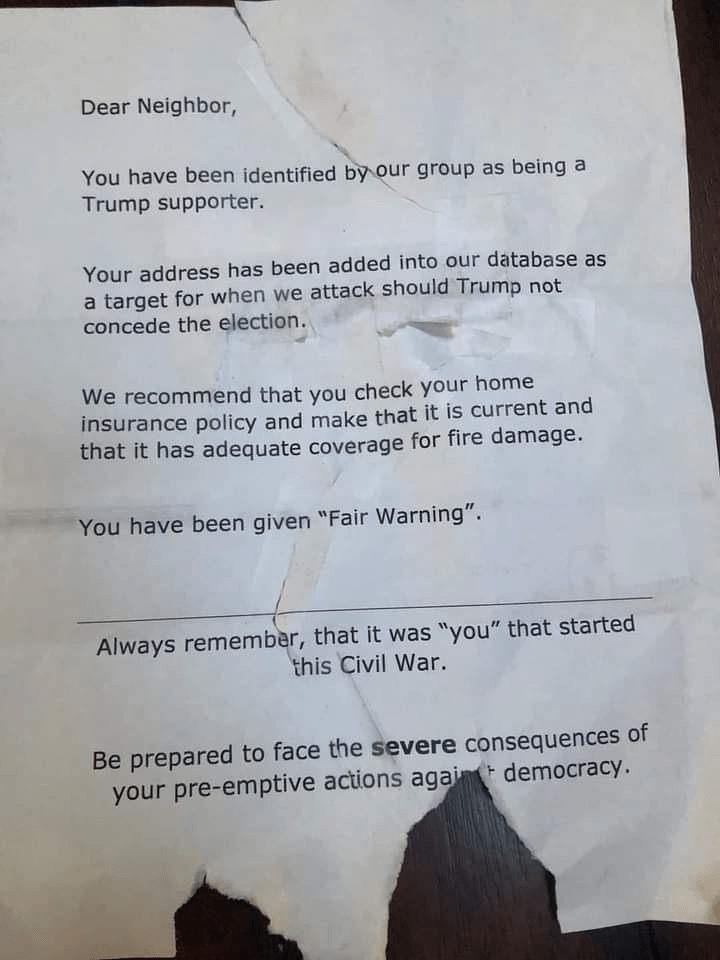 Grandparents with a pro-police flag in their front yard in Seattle, Washington, were targeted in a drive-by shooting on Friday.

KIRO 7 reports that the grandparents had a “thin blue line American flag” in their yard in support of the Seattle Police Department. They noted that “derogatory” comments had been made toward them over the flag, prior to the shooting.

One of the grandparents said, “About twice a week someone was coming by and saying derogatory remarks saying take it down. I didn’t argue with anybody.”

“BLM” and other graffiti was painted in the front of the grandparents’ home in the lead-up to the shooting as well. In fact, things got testy enough that the grandparents took down their original pro-police flag and replaced it with a smaller one, hoping everyone could be at peace.

Then the drive-by occurred, with nine shots fired and “six of the gunshots [hitting] the home and a vehicle.”

6. Rudi Giuliani: “What I found on Hunter Biden’s laptop”

7. Project Veritas: On how Google plans to try and rig the election against Trump

Thank you ML., M., Oz-Rita, Xanthippa, Richard, Johnny U., Wrath of Khan and MANY more who are redoubling their efforts in these trying times.