1. Joe Biden is not always wrong

I agree with @JoeBiden, for once… pic.twitter.com/SyPdzMeQrL

Identification is Response to Presidential Memorandum Reviewing Federal Funding to State and Local Governments that are Permitting Anarchy, Violence, and Destruction in American Cities

The U.S. Department of Justice today identified the following three jurisdictions that have permitted violence and destruction of property to persist and have refused to undertake reasonable measures to counteract criminal activities: New York City; Portland, Oregon; and Seattle, Washington. The Department of Justice is continuing to work to identify jurisdictions that meet the criteria set out in the President’s Memorandum and will periodically update the list of selected jurisdictions as required therein.

The list was published on DOJ’s website today in response to President Trump’s memorandum of September 2, 2020, entitled “Memorandum on Reviewing Funding to State and Local Government Recipients That Are Permitting Anarchy, Violence, and Destruction in American Cities.”

Anyone read the bill? @DanielAndrewsMP is giving himself powers to take away the kids of people who oppose the curfew that neither Vicpol or CHO wanted, with no appeal to court and no limitation/end date – just a belief you might not comply #springst https://t.co/UMaEVtuNLs

5. Sassy left some comments about the woman that sent the poison letter to President Trump but the sources, CBC for one, had changed their stories to omit details without bothering to explain that they did that. What we can call, “A full Winston Smith”. However this source does say she had a gun on her when she was arrested. Sassy also points out that the postal code the woman used as a return address is notorious for hard core muslims in Quebec and famous for hate preachers etc. Hard to believe she would use a proper return address though but there you have it.

On Saturday, we learned that someone had sent a letter containing the deadly poison ricin to the White House, addressed to President Trump. While the toxic envelope never made it anywhere near Trump, it still sent law enforcement scurrying to find the culprit who was suspected of having sent it from Canada. At the time, I speculated that we would find out who cooked up this attempted assassination, even if it took a few days or weeks. It turns out that the trail wasn’t all that hard to follow, however. By last night, authorities had arrested a suspect who was allegedly trying to make her way into the United States from Canada at a border crossing near Buffalo, New York. And yes… the suspect is a woman. (NBC News) […]

Authorities aren’t releasing much information about the suspect yet beyond her gender and the location where she was taken into custody. CBS News offered up a few more details this morning, including the fact that she was carrying a gun when she was taken into custody. Also, she allegedly also sent similar poison letters to an unspecified number of federal prisons, but the intended recipients were not disclosed. If she’s made any statements at this point they aren’t being offered to the media.

6. Hillary Clinton on appointing a SCJ 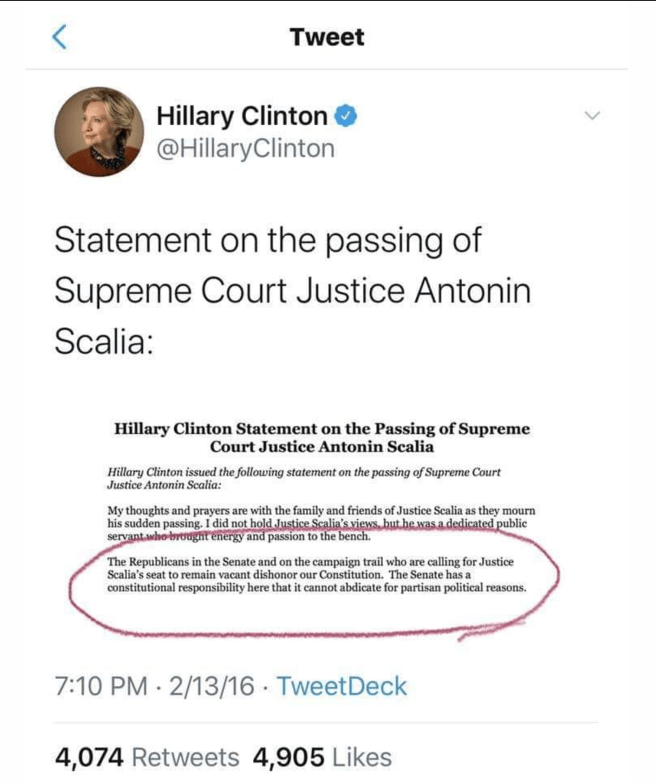 7. Dr. Oz: “Getting a flu shot increases your chances of contracting Covid 19” then, cutoff

8. This is an important article and explains why the Democrats do not appear to be even trying to win. It is because they no longer view elections as they way to achieve power. It is about unrestricted warfare of every kind and every manner. Endless impeachments, armed gangs of trained thugs, interfering with proceedure. The Democrats are now a communist insurgency group, and if not all communist, (the DSA most certainly are) they are all insurgents.

This may even explain why in 2016 Clinton ran such a weak campaign.

9. More on the woman who sent a poison letter to President Trump

10. CDC says its guidance that coronavirus spreads through the air was posted ‘IN ERROR’

The Centers for Disease Control and Prevention (CDC) says it mistakenly published guidance suggesting that the novel coronavirus spreads through the air.

‘A draft version of proposed changes to these recommendations was posted in error to the agency’s official website,’ the agency in a statement.

‘CDC is currently updating its recommendations regarding airborne transmission of SARS-CoV-2 (the virus that causes COVID-19). Once this process has been completed, the update language will be posted.’

If the virus does spread in fine particles, six feet of distance from an infected person would not necessarily be enough to protect you from catching the virus – but whether or not this is a significant mode of transmission is still hotly debated.

The World Health Organization (WHO) said it contacted the CDC earlier on Monday about the update to its guidance.

During a news conference, Dr Mike Ryan, executive director of the WHO’s health emergencies program, said the WHO had not seen ‘new evidence’ regarding airborne transmission and that it reached out to CDC to ‘better understand’ why the guidelines had changed.

It comes days after the CDC changed its controversial recommendations that people exposed to COVID-19 who are asymptomatic forego testing.

6 Replies to “CDC says its guidance that coronavirus spreads through the air was posted ‘IN ERROR’: Links 2, September 21 2020”