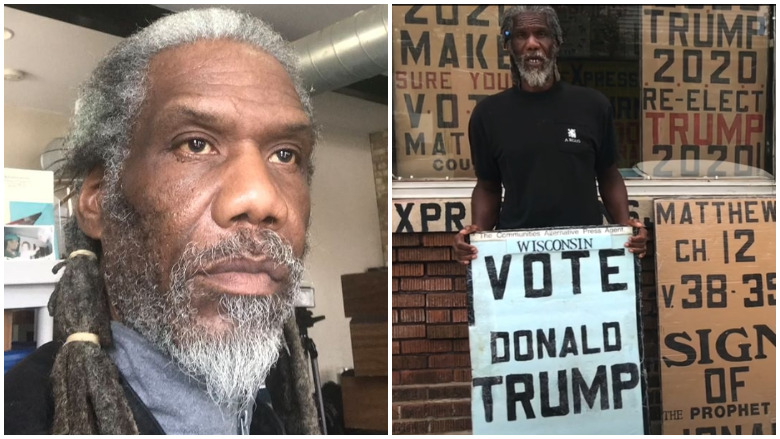 Bernell Trammell, a well-known Black supporter of Donald Trump who was a community fixture known for his publishing company and long conversations on religion and politics, often delivered from street corners while holding pro Trump and other signs, was shot to death in Milwaukee, Wisconsin.

Trammell, 60, was gunned down on July 23 near the very spot where he gave a video interview a few hours before explaining why he supported Trump. Milwaukee police are seeking what they described as “unknown suspects.” The motive is not clear, including whether or not the slaying was tied into Trammell’s political beliefs or Trump support. Some news outlets gave the victim’s name as Bernell Tremmell, but he goes by Trammell on social media.

2. This appear to be some very pissed off Greeks over the retasking of the Hagia Sophia. Perhaps there is a building or two in Athens that could use a make over. Translation of video title: March to the Turkish consulate for Hagia Sophia

3. Police officer speaks to his experience dealing with Marxist insurgents in Portland

The NYPD has released disturbing surveillance video showing a man and his 22-year-daughter cowering in fear as they are being beaten by thugs in a bodega.

At one point the video shows one of the assailants grabbing a beer bottle from the store’s refrigerated case and cracking it over the woman’s head.

5. I bet more people watched this because of this show of hatred for the civilization that gave them everything, than watch women’s basketball generally. In their fevered imaginations, do they think in a communist America everyone will be forced to watch Women’s basketball? Actually I can see how it might. A Clockwork Orange style for dissidents.

Go play for another country, leave us alone. https://t.co/VhtJJzaGhp

6. Need to pass this by Brad

Part of the Greek fleet on alert ready to intervene in the Turkish invasion.

UPDATE: It looks like the Greeks already put the Turks in retreat

7. Muslim Charities seem to use Scarface rules. Which is to say no stinkin rules.

8. Imam answers questions about the disposition of the Hagia Sophia

Imam Erba? read his sermon, titled “Hagia Sophia: Sign of conquest, our trust in Fati?h" while holding a Sword that he said is a tradition in mosques that are the symbols of conquest pic.twitter.com/jVjF4X67yC

9. ANTIFA beats up a black man in Portland

After most of the Portland rioting was over in the early hours of 23 July, fights were still breaking out. A black man gets beat up by a group outside the federal courthouse. pic.twitter.com/MJ8SrTzWwA

10. Censorship in Brazil by the supreme court!

Thank you M., Wrath of Khan, ML., Our friend in Brazil, and MANY more that keep watch and check our information as well as provide it.