1. Montreal synagogue vandalism ‘one of the worst incidents in Canada,’ says B’nai Brith

(Watch closely. The rioting and looting could start any century now)

The break-in at a small Montreal synagogue is being called an outrageous display of anti-Semitism and one of the worst incidents in Canada in recent years by B’nai Brith Canada, a Jewish rights advocacy group.

Torah scrolls were found on the floor and other religious items were stuffed in the toilets at the Congregation Sepharde Kol Yehudaa in Côte Saint-Luc, according to B’nai Brith’s’ CEO, Michael Mostyn.

Torah scrolls are considered extremely sacred in Judaism, to the extent that damaged scrolls are typically buried in a cemetery, rather than being disposed of in any other manner, the organization.

(Video at the Global link is somewhat worth seeing. Its mostly about some unrelated guy who publishes a Neo-Nazi paper in Toronto and other incidents with a focus on blaming non-leftists)

2. Following the usual blueprint, riots in a Paris suburb over someone who died on a motorcycle which was hit by (an islamophobic?) train

A night of urban violence and rioting erupted in the Paris suburb of Montigny-lès-Cormeilles on Wednesday night following the death of an 18-year-old motorcyclist which was blamed on police.

Seven individuals aged from 16 to 32 were arrested in connection with the riots, which saw seven surveillance cameras and 12 garbage bins destroyed, and projectiles launched at the town hall and several police stations in the area.

Forty-five police officers were deployed to restore order, including officers from neighbouring municipalities.

The death of the teen took place on a railway track at around 6:45 pm. He was struck by a train while trying to cross using a pedestrian crossing between Franconville and Montigny-lès-Cormeilles with his mini motorcycle.

3. Ellie’s story. The girl who was arrested for reporting on being forced into sex slavery by and for Muslim pedi gangs.

4. The White House pushes back on the daily BS from the MSM

5. Twitter censors President Trump again. This is the tweet that got marked for violating calls to violence while ANTIFA and Islamic terror groups do not. It seems that Twitter has removed the warning though.

….These THUGS are dishonoring the memory of George Floyd, and I won’t let that happen. Just spoke to Governor Tim Walz and told him that the Military is with him all the way. Any difficulty and we will assume control but, when the looting starts, the shooting starts. Thank you! 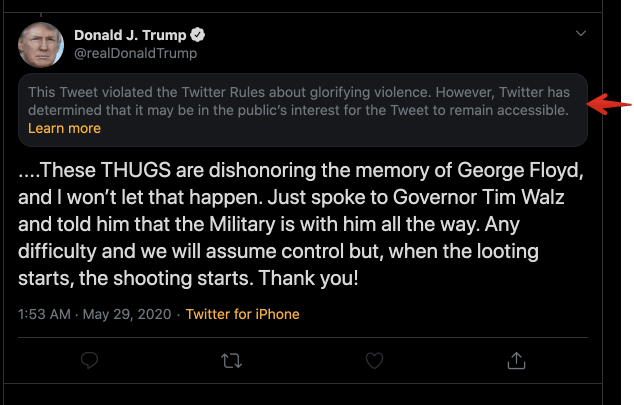 6. China appears to have two fronts of a kinetic war taking place. India, which has a border conflict that is larger and more intense than it has been for many years, and Hong Kong which appears to be near falling to CCP control.

Richard asks if the India conflict is to take eyes off of its moves in Hong Kong.

7. Nearly 90 Per Cent of Belgian Population Growth Due to Migration in 2019

Belgium saw a population growth of 61,235 people in 2019 with 89 per cent of the growth coming from immigration, according to figures released by the Belgian statistics office Statbel.

The country also saw 6,820 more births than deaths in 2019 which represented 11 per cent of the total population growth, but the birthrate has slowed significantly from around 2017 with births being consistently under 120,000 a year since that year.

(That should work out just fine)

The family of a Libyan smuggler slain by migrants has killed 30 of them in an act of revenge, the country’s UN-recognised government said on Thursday.

The 30-year-old smuggler’s family killed 26 Bangladeshis and four Africans, according to the Government of National Accord’s Interior Ministry.

The smuggler was slain earlier by what the ministry referred to as “clandestine migrants”.

The retaliation killings happened in the town of Mezdah, about 150km (95 miles) south of Libya’s capital Tripoli […]

The family additionally injured 11 other migrants, whose nationalities the ministry did not specify. They were admitted to hospital in Zentan, 170km southwest of Tripoli.

How could truth become hate speech? We have a lot of material on that. But here is some of the most relevant to this post:

Thank you Snaphanen.Dk, Wrath of Khan, M., Richard, ET., Johnny U., Chris Jones, EB., ML., C., and all who sent in links, thoughts, analysis and news.