1. Trump: ‘Strong and Brave’ Hungarian PM Orbán Is ‘On My Guest List’

In an interview with business weekly Figyel?, László Szabó recalled that he left the White House feeling very positive about relations between the two nations after a meeting with Trump at the Oval Office in September.

Out of 12 mission leaders, Szabó was the second whom Trump met that day  — which the ambassador said was a sign of respect towards Hungary  — and the pair agreed it was in the best interest of both countries to further enhance Hungarian-U.S. bilateral relations. 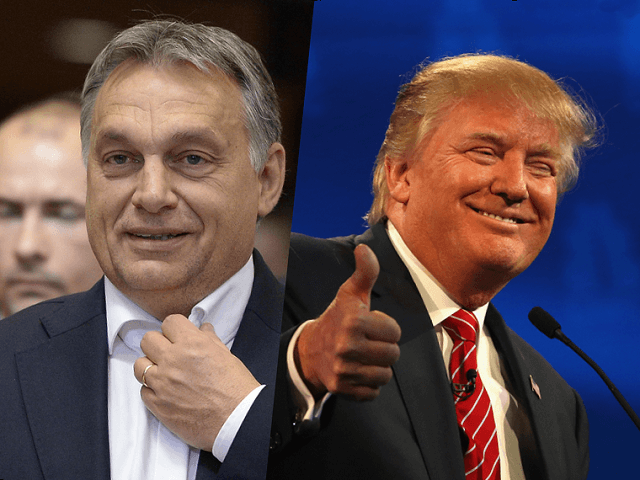 Police have a person in custody following a double stabbing in the city’s northwest Friday evening.

Just after 7 p.m., emergency crews were called to a green space near Berwick Dr. And Bearberry Cres. N.W. for reports of a woman and young child in medical distress, said Staff Sgt. Asif Rashid.

“As police converged on the scene, there was additional intelligence that came forth from neighbours and witnesses suggesting an individual nearby might be responsible,” he said.

“A male was taken into custody without incident.”

Found to be suffering from stab wounds, both were taken to hospital with serious, non-life-threatening injuries.

(We will have to wait till Sgt. Rashid tells us if this was an act of Islamic jihad or not. Asif.)

How come the Somali “refugee” with the ISIS flag, who mowed down five people in Edmonton, has not been charged with a terrorism offence? pic.twitter.com/2YnVbZEzsf

The Afghan insurgent group Taliban claims it has targeted and shot down a military transport airplane carrying tens of American troopers north of Kabul.

Zabihullah Mujahid, a spokesman for Taliban, declared in a statement that the group has shot down the American aircraft, carrying tens of US military forces to Afghanistan.

“The plane has crashed in Kooh-Safi county in Parwan province, north of the Afghan capital of Kabul,” he added, according to a Farsi report by Al Alam News Network.

5. Filipino wanted in US terror plots stands accused at home

A Filipino doctor accused of plotting terror attacks in the United States was arrested months ago in the Philippines for his alleged involvement in kidnappings and beheadings blamed on pro-Islamic State group militants, an official said Saturday.

U.S. authorities said Friday that they disrupted a plot by Salic and two other Islamic State group sympathizers to carry out terrorist attacks at New York City locations, including concert venues, subway stations and Times Square in the summer of 2016.

Tens of thousands have taken part in a controversial prayer day in Poland.

Catholics were encouraged to go to designated points along the country’s borders for a mass rosary prayer for the salvation of Poland and the world.

Church leaders say the event is purely religious, but there are concerns it could be seen as endorsing the state’s refusal to let in Muslim migrants.

The feast day marks the anniversary of a Christian victory over Ottoman Turks at the sea battle of Lepanto in 1571.

People were bussed in from more than 300 churches to points all along the border.

Even before its feud over the national anthem with President Trump, the NFL Players Association wasn’t on the same political team as many of its fans, judging from its contributions to leftist advocacy groups.

Tax documents released by 2ndVote show the NFLPA donated $5,000 in 2015 to the Center for Community Change Action, a group active in the anti-Trump resistance and bankrolled by a host of liberal foundations, including top Democratic donor George Soros’s Foundation for Open Society.

A member of the AFL-CIO, the NFLPA also contributed in 2013 and 2015 to Working America, the AFL-CIO’s community affiliate, which Open Secrets said spent $1 million in 2016 to defeat Trump.

Suspected Islamists attacked a string of police stations in a small town in northern Mozambique killing two policemen but 14 of the gunmen were slain, police said on Saturday.

Police have been slow in releasing details of the attacks which occurred on Thursday and Friday in Mocimboa de Praia.

Police said the attacks were coordinated.

9. Family of kidnapped Canadians share proof of life video taken by muslims in the Philippines.

10. Italians stage kiss in, to protest the attack on a young couple necking near an illegal mosque.

Flash mob organized by Fratelli d’Italia on Via San Vito. The protest is in front of an Islamic center (illegal) closed in the past months it housed an illegal nursery school. The rightist party decided to mobilize after Sunday night, a young engaged couple was passing in front hand in hand exchanging kisses and was attacked outside the Islamic center. The aggressor, a Mali native 24 years old shouted at the couple: “You cannot kiss in front of the mosque and pushed the girl, hitting her and her fiance nwith kicks and punches. The man who at the moment of being arrested, was not very lucid, was arrested on charges of causing injury and resisting a public official.

The area around the Alexanderplatz metro in Berlin has become a centre for migrant youth gang violence and drugs, leaving the police to lose control and the district to demand more resources to fight the lawlessness.

The situation around Alexanderplatz has rapidly deteriorated due to the ongoing fights between rival migrant gangs from Afghanistan, Iraq, Syria, and North Africa.

The local government has decided to increase the police presence in the area by building a  new police station and hiring two social workers to encourage the young migrants not to commit crimes, but some are sceptical of the move, Berliner-Kurier reports.

The left-wing coalition government plan is to hire the two social workers to act as contacts and look after the young migrant men during the day. Also planned is a small new police station which is to be set up at the construction site near the metro station.

(Because the left are so inclusive and tolerant)

A 60-year-old Pennsylvania vegan says she’s receiving death threats and abusive phone calls—and she’s been forced to hide her Mother Nature Vegan Cuisine food truck—following her comments on Facebook mocking the deaths of dozens of Las Vegas concert-goers killed Sunday by a man shooting at them randomly from a hotel room.

Thank you Gates of Vienna, EB., Wrath of Khan, Richard, ML, M., Xanthippa, and MANY more who sent in a LOT of important material.

For those who have not seen it, please make sure you see the story already posted on the Toronto District School Board’s definition of Islamophobia.

An extra. Here is a video I missed out of Oz from May of this year: