This is clearly theater of some kind. But why? Chances are he was provoking a response precisely so he could do exactly this. Much like Islamic street prayers everywhere.

2. Welsh woman ‘imprisoned by father’ for ‘kissing a guy’ A21-year-old Welsh woman who says she has been imprisoned by her father in Saudi Arabia because she “kissed a guy” has asked a British High Court judge for help.

Amina Al-Jeffery, who grew up in Swansea and has dual British and Saudi Arabian nationality, claims she is banned from using the internet, phone and bathroom.

She has also said her father hit her and says she has “metal bars” on her bedroom door.

She described herself as a “locked-up girl with a shaved head”, the judge was told.

(Much as I like the Danish government being one of Europe’s best, this issue is sufficiently serious that its worth toppling it if they really do get an Orban in exchange. Best thing perhaps is if they just adopt a zero tolerance for Islam policy and then maintain)

One of the Danish People’s Party’s most influential figures has called for it to topple the minority centre-right government of Lars Løkke Rasmussen in a bid to force through a temporary ban on Islamic immigration.

Søren Krarup, the priest regarded as the party’s chief ideologue, said he supported the call made on Thursday by the party’s deputy leader Søren Espersen for a total ban on immigration from Muslim countries for a period of 4-6 years, and believed that the best way to achieve this was to withdraw support from the government.
“In my opinion, the Danish People’s Party should topple the [Lars] Løkke [Rasmussen] government without reflection,” Krarup told Denmark’s Berlingske newspaper. “Løkke is a completely unqualified leader, who would rather cultivate a European supra-nationalism than to treat Denmark as a Christian country with our own historical context.”

4. Here is a novel essay by a Catholic that is pro Christian and rationally aware of the consequences of Muslims in numbers in proximity to a Christian population.

The Open Doors charity estimates that 7,000 Christians were killed in the year to October 2015 for faith-related reasons. They estimate that 2,400 churches were attacked or damaged. They state that “Islamic extremism is by far the most common driver of persecution.” His Grace Bishop Angaelos, General Bishop of the Coptic Orthodox Church in the United Kingdom, released a statement this week in which he talked about the “exponential rise in attacks against Christians and Christian property in recent months.” He described “a growing trend towards the direct targeting of priests and their families.” Regular Islamic attacks on churches and Christians are not new in Egypt or indeed in many other countries.

5. Merkel MUST go! Germans plan ‘huge’ demonstration over leader’s open door asylum policy
(I hope all who attend have special reenforced umbrellas. The last time they did this, water cannon trucks showed up, a pretense for aggression was crated by a fake reporter, and water cannon cleared the demo away. And remember this?)

Thousands are expected to gather in the capital’s historic Washington Square for an anti-immigration rally, where they will be addressed by right-wing politicians.

News of the gathering is being spread under the hashtag #Merkelmussweg – meaning Merkel must go – which has been used more than 1,500 times in 24 hours reaching hundreds of thousands of people.

And why would they want Merkel to go?

6. Afghan cleric arrested after marrying six-year-old child, parents say she was abducted
(Just the title is an outrage)

An elderly Afghan cleric has been arrested after he married a young girl, officials said, in the latest case highlighting the scourge of child marriages in the war-battered country.

Mohammad Karim, said to be aged around 60, was held in central Ghor province as he claimed her parents gave him the six-year-old girl as a “religious offering”, officials said.

But officials cited the family of the girl — believed to be in shock — as saying that she was abducted from western Herat province, bordering Iran.

“This girl does not speak, but repeats only one thing: ‘I am afraid of this man’,” said head of the women affairs department in Ghor, Masoom Anwari.

The girl is currently in a woman’s shelter in Ghor and her parents are on their way to the province to collect her, the local governor’s office said.

7. Anne-Marie Waters is organizing a demo in the UK called, “Islam Kills Women”. 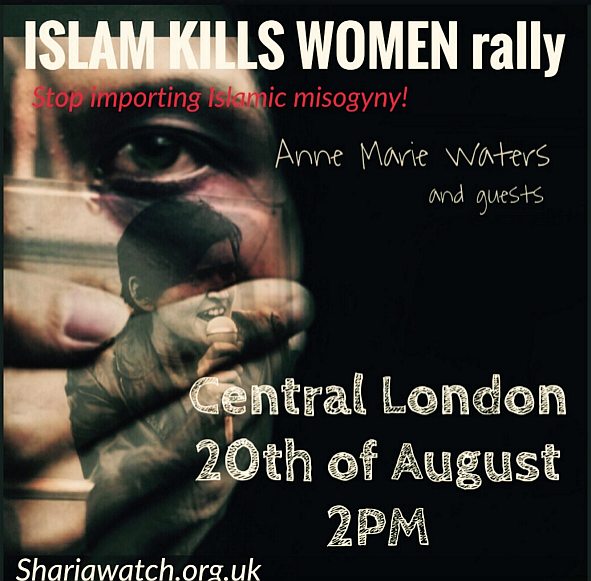 Thank you M., Wrath of Khan, Dumbstruck, Nash Montana, ML., Gates of Vienna, CB Sashenka, and many others.
Today was a long day sorting out things like computer problems and related matters. So its a little light and a little less organized than even the usual messy norm. But a new computer is being sorted out and I hope to be at full speed very soon.
A special thank you to she who helped me arrange a new machine. Its really profoundly appreciated.
Please check the daily links post as usual. There is much beneath the surface that is worthy of attention.
And remember, August is officially Muslim appreciation month! Wear your best shroud!

(SACRAMENTO, CA, 7/29/16) – On Monday, August 1, the California chapter of the Council on American Islamic Relations (CAIR-CA) will join Assembly member Bill Quirk (D-Hayward) in the presentation of House Resolution 59, which recognizes the month of August 2016 as “Muslim Appreciation and Awareness Month.”

WHAT: Presentation of HR 59, to Recognize August 2016 as “Muslim Appreciation and Awareness Month

“I am proud to celebrate the first ever Muslim Appreciation and Awareness Month by honoring generations of Muslim Americans for their many social, cultural, and economic contributions to California,” Assembly member Quirk stated. “The rhetoric surrounding this election makes the presentation of this resolution more important for me,” he said. “It is appropriate to acknowledge and promote awareness of the myriad invaluable contributions of Muslim Americans in California and across the country, and extend to them the respect and camaraderie every American deserves.”