First let me say, the template is a work in progress. Im sorry it looks as it does. There does not seem to be a way for me to make a change in it that I can see within 12 hours or so. And that includes clearing caches all along the line. So I may abandon it and go back to the previous one. But at least so far it appears that people can actually leave comments and the site more or less works with this template, even if it looks literally thrown together.

The comment box, by the way, can be stretched out to what size you need.  So don’t feel limited by the size of the box. Also I clicked the stuff to make the font bigger in the comments but I have no idea if that did anything as changes don’t seem to show up for anywhere from 12 hours to 18 hours. At least for me. 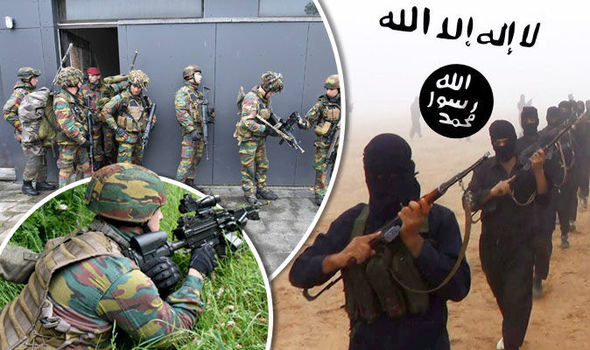 Intelligence chiefs fear militants are planning ‘a summer of carnage’

Intelligence chiefs fear militants are planning “a summer of carnage” after retrieving data from the laptops and mobile phones of terror suspects Mohamed Abrini and Salah Abdeslam.

Abrini is believed to be the “man in the hat” linked to the Brussels bombings in March which killed 32 people.

He and Abdeslam are accused of being involved in last year’s Paris atrocity, in which 130 people died.

(Given the fact that he is saying things that are objectively, empirically and measurably true, its surprising they used so few inflammatory adjectives describing him. I thought when you accurately describe what you see outside your own window you had to be called, “A far right wing extremist populist who once was dressed as Hitler at a party”.)

Berlin (AFP) – A German right-wing populist politician has attacked Chancellor Angela Merkel as a “dictator” who is trying to “replace the German people” with migrants, a Sunday newspaper reported.

Alexander Gauland, of the anti-immigration Alternative for Germany (AfD) party, told a rally outside Berlin that Merkel’s liberal asylum policy was radically transforming the face of the country, the Frankfurter Allgemeine Sonntagszeitung said.

He called Merkel a “chancellor-dictator” to applause from the crowd and said Germany’s mainstream parties were pursuing a policy of “human flooding”, an “attempt to gradually replace the German people with a population coming from all parts of the earth”.

(Not much meat in the actual article. Mostly deflection from Islam. But the headline says what is needed)

The prosecutor of Valence, Alex Perrin, says the bus was hit Friday night as it traveled along the A7 highway on its way home from a trip to Spain.

Six of the passengers, which included school children, were slightly injured after being hit by flying glass and one person was seriously hurt.

(Fascinating. no description, no details about the attack, must have been a Casper attack. These are getting more common. The left believes the best way to defeat Islamic terror is just not to acknowledge it. This tends to hand them the win without a fight.)

5. Dozes of people swearing alligiance to the Islamic State.

(How long till this is done in Quebec? Is it already? So much for the FLQ and Canadian bilingualism)

Thank you Richard, M., Oz-Rita, Wrath of Khan, Tundra Tabloids, GB., and all who sent in materials.

This is interesting. The Philippine President seems to be defaulting back to lethal vigilante justice to deal with the war on drugs. At some point, Europe will have to do this on Islam. That is, if there is any ambition to remain European at all whatsoever anywhere in Europe.

MANILA, Philippines (AP) — The Philippine president-elect has encouraged the public to help him in his war against crime, urging citizens with guns to shoot and kill drug dealers who resist arrest and fight back in their neighborhoods.

In a nationally televised speech late Saturday, Rodrigo Duterte told a huge crowd in the southern city of Davao that Filipinos who help him battle crime will be rewarded.

“Please feel free to call us, the police, or do it yourself if you have the gun — you have my support,” Duterte said, warning of an extensive illegal drug trade that involves even the country’s police.

If I were Obama and other leftist leaders, I would be doing everything in my power to make sure this does not work. What the Philippine leader is doing is the ultimate experiment to see if a society works better when the people really do have the power and the government simply acts in the national interest. We already know this works from history, but it is diametrically opposed to the leftist agenda.

Here is a great link showing how horrifically the BBC is betraying the British people and its history.

Notice how they use a “history teacher’s” comment to decieve us all about the crusades. This is a blatant attempt to force the West to actually play along with the idea that the Crusades where a horrible evil offensive action against the oppressed darker skinned peaceful muslims. Stunning. And disgusting.

Frankly all real brits should dress as crusaders. Then launch an actual crusade. That is, if they want to remain British in any meaningful way.

20 Replies to “France racing with Germany to first full surrender to islam: Evidence below. Links 1 on June 5 – 2016”