One taxi driver was arrested and his vehicle impounded, the city’s Metro Police Superintendent Wayne Minnaar said by phone on Friday. Three police officers were injured as they tried to stop the violence, he said.

“We are aware of an incident that took place in Sandton this afternoon involving intimidation and violence against Uber driver-partners,” an Uber spokeswoman said in e-mailed comments. “Authorities were notified and arrests have been made. The threats and intimidation against those who want to use Uber to boost their income is unacceptable.”

In a rare appeal to India’s Muslim minority, Islamic State says it is planning to avenge the deaths of Muslims killed in riots in Indian Prime Minister Narendra Modi’s home state of Gujarat and elsewhere.

India, a Hindu-majority country, is home to more than 160 million Muslims, but only a handful of them have joined the Middle Eastern group. Indian leaders and members of the community say this testifies to the strength of the country’s secular democracy.

In a video monitored by the U.S. intelligence group SITE, Islamic State mocked Muslims living in harmony with Hindus who worship cows, trees and the sun, and urged them to travel to IS-held territories in the “Caliphate”.

3. Now ISIS jihadis use BOULDERS to crush a prisoner to death in shocking new propaganda video filmed in Yemen

ISIS have released a shocking new video showing a prisoner being crushed to death by a large boulder in Yemen.

Scroll down for video at site 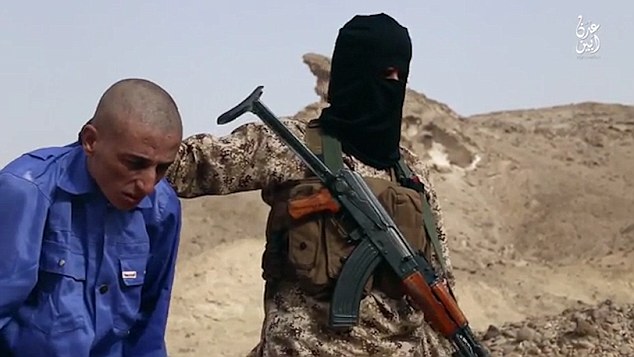 (It would seem that the sum total of the human imagination when confined by Islam, is dedicated to the infliction of human suffering and death)

4. The ADL and the Armenian Genocide: It’s Not Over Until It’s Over

(The ADL, like so many organizations that used to do something connected to their name, has become another vector of attack on behalf of cultural-Marxism by usurping the moral authority of the Jewish people, who had survived attempted genocides)

5. Media-Darling Muslim Selfie Girl: ‘Hitler Left Some Jews So We’d Know Why He Killed Them’ Spokeswoman for the British Labour Party

A Muslim girl who took a “defiant” selfie at an anti-Islam protest in Belgium allegedly posted anti-Semitic comments on her Twitter, Facebook, and Ask.fm accounts, according to a Belgian former soldier and a leading Dutch website.

Zakia Belkhiri, 22, was lauded as an “inspiration”  by the media as her picture next to Vlaams Belang (Flemish Interest) protesters went viral.

But web sleuths have now claimed that Ms. Belkhiri’s “peace sign” in the picture is perhaps out of character for her. They claim she tweeted in 2012: “Hitler didnt kill all the jews, he left some. So we [would] know why he was killing them”.

6. The Islamic State is preparing a major announcement via a speech by Caliph Al-Bagdahdi

YT Pulled the original. But here is an excerpt

Thank you Xanthippa, M., Wrath of Khan, and all who sent in materials.

One has to post as fast as one can just to stand still. Explanations and analysis are short because posting the raw events is long.

2 Replies to “Islamic State makes major announcement of some kind, Uber wars now use guns and more: Links 2 on May 21 – 2016”