1, This is a photo apparently taken 3 days ago at Towson University in Maryland.

I have enlarged and enhanced so you can read the second line.

“Historical ties between homophobia in communities of color & colonization. By: Shaham Mclauren.”

Links: WCBM, Twitter, Imgur (which claims it was at UO) 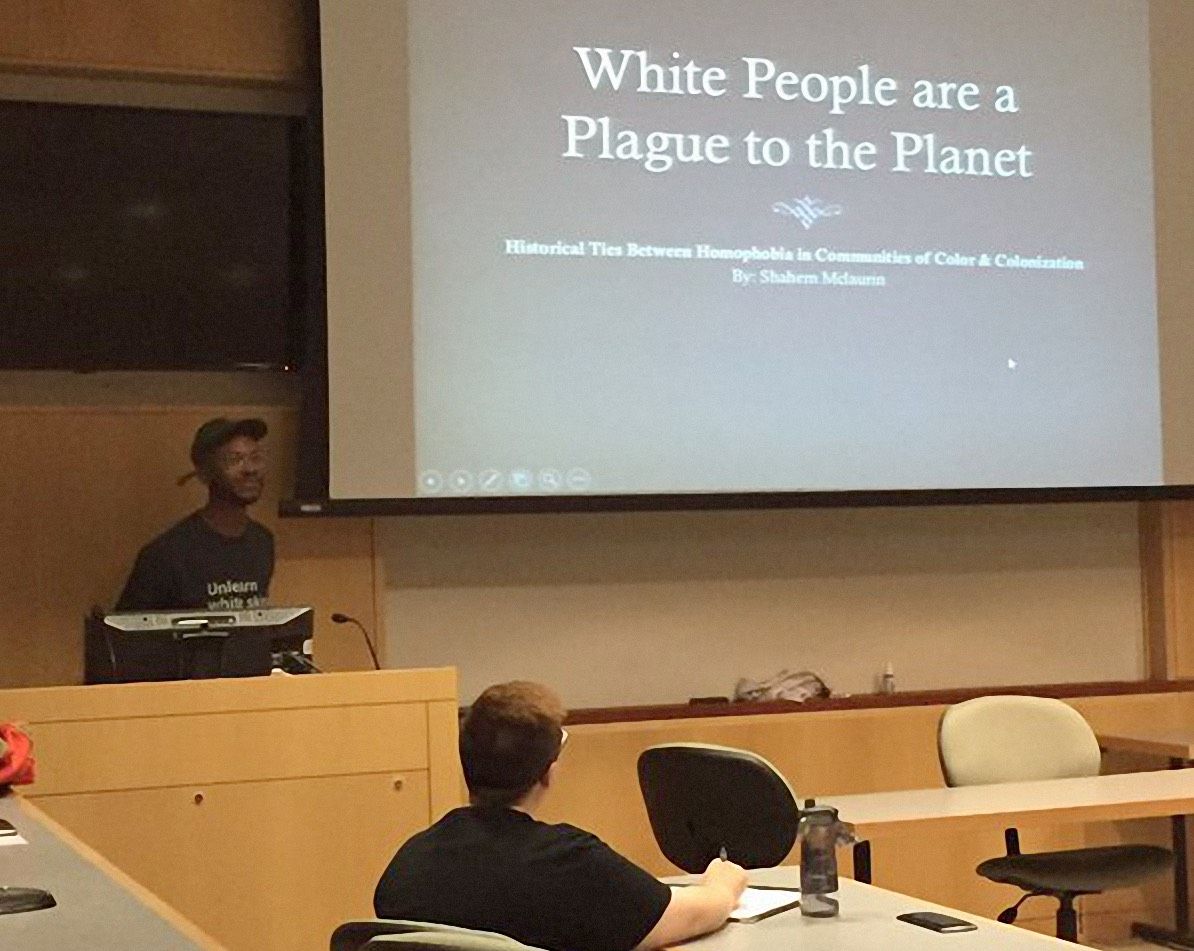 The governor of Texas sent a harsh letter to US President Barack Obama on Monday, announcing that his state would not only maintain its sanctions on Iran, but strengthen them, The Algemeiner has learned.

Governor Greg Abbott explained that the letter was in response to a written appeal made by Obama on April 8, requesting that Texas “review” its economic sanctions against the Islamic Republic – as was promised to Tehran in the Joint Comprehensive Plan of Action, the nuclear deal between Iran and world powers reached in July.

An 18-year-old man has been arrested in western Sydney by federal and New South Wales police for allegedly planning a terrorist act.

Authorities said the arrest was not related to raids earlier today at properties in Melbourne, which are part of an operation connected to the arrest of five Victorian men who allegedly planned to travel to Indonesia by boat.

The ABC understands that what the teenager was planning was a new plot and not connected to plots by terrorism suspects who are currently before the courts.

A source has told the ABC that the man’s arrest has disrupted his plot.

(This bears watching. If any action is taken whatsoever against this Church, it will be a sign of a double standard in law that is proof positive of the abandonment of rule of law having been replaced with cultural Marxism and sharia norms. ***IMPORTANT UPDATE*** CAIR is planning a protest against this sign Sunday this week, the 22nd May, to change or take down the sign!)

The pastor of an Oregon Baptist church is under fire locally for putting what critics call a bigoted message on his church’s sign board, KATU reports.

Pastor Michael Harrington placed the words on the reader board outside Belmont Drive Missionary Baptist Church. On one side it reads, “Wake up Christians, Allah is not our God, Muhammad not greater than Jesus.” On the other side, it says, “Only the Bible is God’s word, ‘holy book,’ Koran is just another book.”

“Working conditions in Qatar are, unfortunately, cruel,” Norway’s Tom Høgli, who currently plays for Danish side FC Copenhagen, said in a video clip, where he slammed Qatar’s treatment of labourers on World Cup sites as “modern day slavery”.

(The video at this site raises important questions few are asking. If 2/3rds of the fighters in the Islamic State are foreign born, how can this possibly be a civil war to depose the Syrian leader? This has to be the end game of the Arab Spring to replace more or less Western thinking leaders with islamic ones and the birth of a new pan Arab Islamic state. Because this is what is happening and what the US is funding while more or less pretending to fight it)

BERLIN — Teenagers are being turned into “weapons” by ISIS, triggering fears that they could slip back to the West to launch attacks.

The head of the Germany’s domestic intelligence service said authorities there had identified children aged as young as 13 who have left for ISIS territory or who are “prepared to stage attacks” in the country.

Some have been brought to Iraq and Syria by their parents where they have been brainwashed while others are being radicalized online, Hans-Georg Maassen told NBC News.

Much more to come today. This is just the opening salvo.

Thank you Yucki, M., Gates of Vienna, Dumbstruck,Wrath of Khan, and all who sent in materials. Apologies to all I lost track of overnight.

9 Replies to “The total reversal of real rights and freedoms by selective enforcement: Links 1 on May 17 – 2016”