(France has actual laws for state secularism called Laicite’ which the French have broken in spirit and letter for Islam and Islam only at every level for the past few years. What the Pope really means is, less Christian)

“Your secularism is incomplete. France must become a more secular country” because its secularism “sometimes results too much Enlightenment philosophy, for which religions were a subculture. and France has not managed to overcome this legacy, “ruled Jorge Bergoglio.

the pontiff received Tuesday for half past one delegation roses Fish movement Christian-based political affiliated to the Socialist Party (PS). The interview was reported in the weekly La Vie by the managing editor, Jean-Pierre Denis.

The concept of secularism introduced into the French democracy is “healthy”, insisted the pope, because “today, a state must be secular”. But “a healthy secularism has an opening to all forms of transcendence, according to the different religious and philosophical traditions. The search for transcendence is not only a fact, but a law.”

2. Merkel MUST GO! Chants and boos

While official state polls show Merkel “rising in popularity” due to her “humanitarian no-limit policy on immigration”, once again the reality on the street looks very different. As Angela Merkel gets out of her bulletproof car in Stralsund to discuss the postponing of the relief of economic sanctions against Russia on wednesday, hundreds of people on the street shout “Merkel must go” and boo her, only held back in their anger by heavy security.

Just 2 days ago while interviewed on German State Television Merkel again reinforced her belief in an “open borders” policy and stated that she will refuse to put any limit on illegal immigration whatsoever as long as she is in office. When asked what she wishes for the future, she answered “as many [foreign] people in Germany as possible”.
Angela Merkel has no children and served in the Communist Youth in the GDR. Her party lost over 10% of its voter-base within months as she believes Germany should abolish its borders and advertise with propaganda (sic!) for young African and Arab males to come to the country to fix the declining German population. (Source: https://www.youtube.com/watch?v=ZqIdg…)

(If state media shows her popularity growing, then Germany is not just Totalitarian in its control of truth about Islam on social media but also deceiving the people with disinformation about popular sentiment on her policies)

3.  Refugees do minor self injury to try and claim rights they do not have for crimes they did commit.

2016: a choice between Donald Trump and Goldman Sachs.

6. Knife fight in the Jungle: Terrifying moment migrant is stabbed by blade-wielding attacker as Calais governor reveals British anarchists are fuelling violence in the camp

This the terrifying moment a migrant was stabbed by a blade-wielding attacker as French authorities continued their attempt to clear the Calais Jungle.

A man in an orange hooded top could be seen lunging at a migrant with a kitchen knife as tensions boiled over in the slum in northern France today.

Onlookers try to intervene and drag the frightened victim away before the attacker himself is stripped of the blade and walks away from the scene.

Riot squad officers returned to the migrant camp for a third successive day of clearing the camp of makeshift homes.

It comes after the town’s Prefect blamed British anarchists for manipulating a ‘hardcore’ of 150 migrants into causing violence in the sprawling encampment. 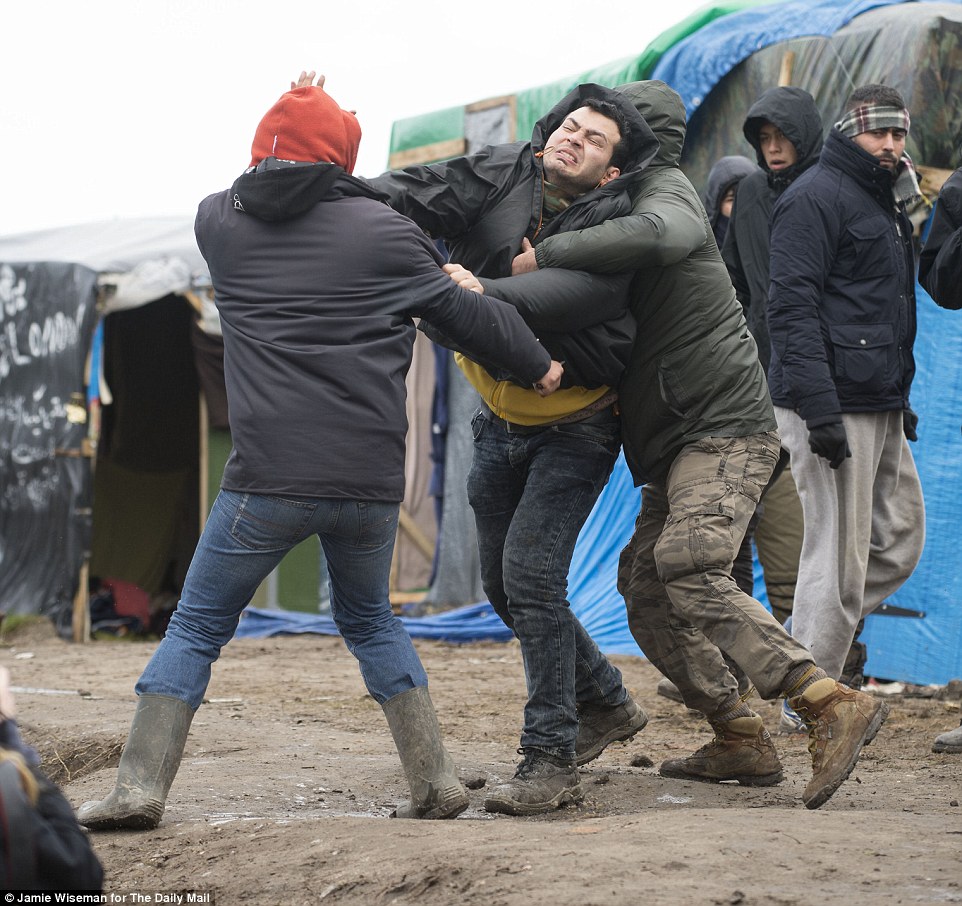 7. Canada joins Turkey in taking journalists to court who criticize the instruments of state or ’cause mischief in the land’.

8. Pakistan legislature may veto domestic violence law as not compatible with Islam

(Really you need to read this over there for yourself. Especially in the wake of the hanging of the murderer of the governor who wanted to end the death for apostasy law)

U.S. Air Force Gen. Philip Breedlove told reporters Tuesday that mass migration spurred by the ongoing conflict in Syria and the threat of ISIS in the Middle East was allowing terrorists free entry into Europe.

He warned that the mass influx of migrants is allowing ISIS to spread “like a cancer, taking advantage of paths of least resistance and threatening European nations, and our own, with terrorist attacks.”

(ANSA) – Rome, March 2 – Italy “appears increasingly more exposed” to the threat of jihadist terrorism, even though no specific terror plans have been detected, the country’s intelligence services said in their annual report to parliament on Wednesday. The report said there were numerous references in extremist Islamist propaganda to Italy being an enemy for its relations with the United States and Israel and its commitment to fighting terrorism. It said that the greatest potential threats were linked to the Catholic Church’s Jubilee of Mercy and to the potential activation of new generations of aspiring jihadists joining ISIS campaigns. Italy’s intelligence services also said Wednesday that there is a high risk of Europe suffering another major terrorist attack by Islamist extremists like those staged in Paris in November. “The risk of new actions on European territory is considered high,

11. Egyptian member of Parliament expelled for meeting with an Israeli diplomat

A report by a seven-member investigative ?committee accused Okasha of violating the ?principle of the separation of powers and disrupting ?Egypt’s deep-rooted parliamentary rules and ?precedents when he recently took the unilateral decision of ?meeting with Israel’s ambassador.?

Hassan Bassiouny, a former judge who led the ?committee, told the assembly that the seven ?members of the committee recommended that ?Okasha be banned from attending one nine-month ?legislative session after they found him guilty ?of showing disrespect to parliamentary rules and ?acting against the sovereignty of state institutions.

??”The committee, which was formed on Sunday ?and questioned Okasha on ?Tuesday, decided that he was not able ?to defend himself or show that he received prior ?approval from any sovereign state authority ?before he held his meeting with the ambassador ?of a foreign country (the ambassador of Israel),” the report said.?

12. Loretta Lynch, the US attorney General who replaced Eric Holder, has a difficult time controlling the narrative at a sort of town hall meeting.

Thank you M., TL., Wrath of Khan, Richard, Gates of Vienna, and many more who sent in a lot of important materials. There is more coming as soon as translations are in and editing gets done.