Growing resentment against the influx of migrants and refugees in the Dutch town of Kaatsheuvel. Some of the demonstrators received a visit from the police, and were questioned about posts they had made on social networks. RT talked with the British anti-migration activist Robin Tilbrook.

2. The man in France who defended his home and family against a violent rampaging mob of leftists and illegals by brandishing a gun is to be prosecuted for it.
This article is in French. And its left leaning and sympathetic to the attackers. But the fact is, the man was arrested and will be prosecuted for showing a shotgun to a mob who were clearly violent and threatening his home and family.

3. Meanwhile in Calais, a security guard was arrested for opening fire on ‘migrants’

Police arrested a security guard in Calais tonight after he opened fire on two illegal immigrants trying to get into England.

The immigrants were hit in the back and arms by a high powered air rifle as they waited with around 300 other men.

They had been staying at the camps bulldozed by the French authorities.

The police are worried that the shooting might be a vigilante taking the law into his own hands.

‘A group of Eritrean and Sudanese migrants were walking close to the port when the firing started,’ said a police source. 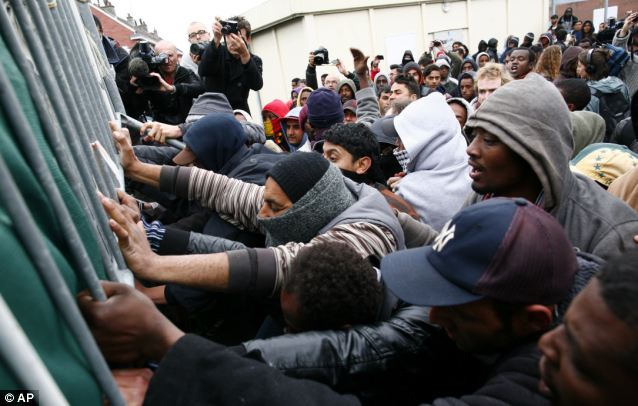 4. And then, as already reported, a young girl who was in the process of being raped, used pepper spray to get away, has been charged and possibly convicted and fined. the rapist has not been caught. So clearly it was not he who complained.

I am sure there are hundreds of examples of the state attacking the victim and not worrying too too much about the perps. Clearly, the victims represent far to large a threat to the political order, especially of the European Union and Germany who gains the most from it. But this cannot be tolerated. Rule of law must be brought back and civilization restored.

6 Replies to “Evidence of leftist totalitarianism and contempt for the law abiding becoming the dominant modus operandi in the West.”