(I have not watched it yet)

(Boy NATO has really gone to seed since Obama)

Several civilians waving a white flag were shot at in the town of Cizre, Friday. The victims are reported to be Kurds, and they were allegedly shot at by Turkish troops, reportedly leading to fatalities.

Footage is reported to show the moment of the shooting, which occurred as they pushed a cart down the street with two covered bodies.

“If it just saves one life” is apparently a fine argument for destroying the second amendment, but not when it comes to stopping the entry of Muslim terrorists into the US.

The Obama administration on Thursday eased visa rules for certain European travelers who have visited terror hotspots in the Middle East and Africa, triggering a backlash from congressional lawmakers who sought the restrictions for security reasons.

Moments after the announcement, two key Republicans declared the administration is “blatantly breaking the law” – a law that President Obama signed – by implementing the changes.

Obama is above the law. Anyone who disagrees is an Obamaphobe.

Under the revised requirements, some Europeans who have traveled to those four countries in the last five years may still be allowed to travel to the United States without obtaining a visa if they meet certain criteria.

BERLIN (AP) – German authorities say they haven’t uncovered any evidence linking a man who was shot and killed as he stormed a Paris police station to a terrorist network.

The Tunisian man, who went by multiple aliases and had applied for asylum in seven European countries, was killed Jan. 7 as he stormed the police station wielding a butcher’s knife and wearing a fake explosives vest.

German police a week ago raided the suspect’s apartment at an asylum-seeker facility in Recklinghausen on information from French authorities.

North Rhine-Westphalia criminal police head Uwe Jacob said Friday the man had a homemade Islamic State group flag on his wall and IS propaganda in his cell phone but it appeared he acted alone.

(More on that in the daily links post, and coming from translators)

Police investigating a terrorist suspect, who attempted to stab officers in Paris earlier this month before being shot dead, have arrested nine migrants in the western German town where he once lived as an asylum seeker.

Three of those arrested are thought to be living in Recklinghausen illegally and six are suspected of theft, local police said on Friday.

Police said they were able to confiscate stolen goods, tools for breaking and entering and illegal drugs.

Searches took place simultaneously at two different shelters as part of the state authorities’ investigation into the knife attacker’s link to the town in North Rhine-Westphalia.

6. Tundra Tabloids does an expose on the Soldiers of Odin, as expected, a group being characterized as ‘far right wing extremist’ when in fact they are just filling in the law and oder gap the police created when they started enforcing cultural Marxism and not the law

Their vice president told me “The media [slanders] every immigration-critical group. Of course it is not nice, but what can you do?” Other group members have shared similar sentiments. I’ve seen nothing to suggest that the Soldiers have any kind of malicious motive.

The group has stated it has zero tolerance for behavior that strays outside of their guidelines, which mandate cooperation with police and prohibit violence.

(Nothing is happening that any thinking person did not know was going to happen, and many have been predicting for years and even decades. These current leaders should be on trial and not believed when they make pressure relief noises. They will change nothing)

8. An interesting video about Christian Eritreans in Sweden, escaping Islamic supremacy and war and persecution 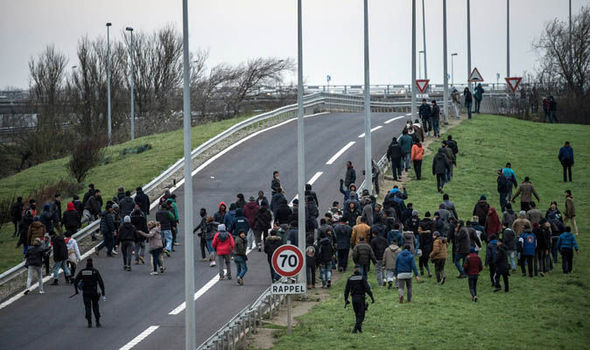 Calais migrants have attacked a bus full of British schoolchildren

The youngsters were left terrified after a gang of thugs targeted their bus as it travelled through the notorious port town in the early hours.One child was said to have suffered an epileptic fit following the horrifying attack which marred the end of a dream school trip for the children, some of whom were as young as 12.

9. The scale and magnitude of the attacks on New Years Eve in Cologne is still being revealed to be larger than previously reported. 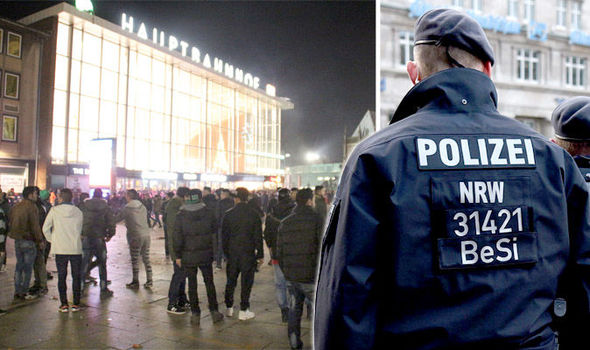 The scene outside Cologne cathedral on the night of the attacks

The disgusting list of crimes reported in the German city run to a staggering 821 complaints, and range from sexual assaults to gang rape.

When including reported attacks from all of the major cities in the North Rhine-Westphalia state – including Cologne, Dusseldorf, Dortmund and Bielefeld – the complaint figure is said to almost top 1,000.

A shocking 359 complaints relate to sexual offences, while 659 women were recorded as alleged victims, according to the list finally published by NRW state government.

It also revealed 126 claims of “rape by a group” and 47 allegations of “sexual assault by a group”.

The release of the full list follows repeated claims of a cover up by German authorities and media.

(How very convenient for Heesch council. I look forward to the day when the Dutch people ban them.)

Following riots and growing tensions in the Dutch municipality of Bernheze over a planned refugee centre, Mayor Marieke Moorman said that she did not want to think about a threatening letter that the town council received allegedly containing a bullet. The message is thought to be related to a planned asylum seekers centre as protesters continue to decry the site’s construction.
Moorman has also gone on to forbid a demonstration against the centre set for Thursday in the municipality’s town of Heesch. Her decision comes after a protest of more than 1,000 protesters against the construction of the centre turned violent on Monday 18 with demonstrators throwing stones, fireworks, and eggs at both police and the municipality council building. The structure also suffered an attack on Wednesday 20 after unidentified suspects broke a window with a stone.
Many of Heesch’s inhabitants have decried the plans for 500 refugees to be located in the small town over a 10 year period, saying that the number was too high. Alongside threats against the mayor and Monday’s riot, <strong>a dead pig was reportedly discovered hanging in a tree in front of the site of the proposed refugee centre</strong>, with residents also purportedly dumping sand on the mayor’s driveway earlier in the week.

Norway: Police detains 82 refugees after storming asylum centre
Police detained 82 refugees at an asylum centre in the Norwegian border town of Kirkenes on Friday. The asylum centre in Kirkenes hosts mainly refugees that have entered Norway via neighbouring Russia.
None of the asylum seekers are allowed to exit the premises as they await deportation to Russia. Police officers patrolled the gates of the asylum centre to prevent potential escapes from the premises after<strong> three asylum seekers reportedly managed to escape the centre and hid in the town’s church.</strong>
The asylum seekers are believed to remain inside the church as police officers are not willing to enter the building, nor are the refugees being expelled by the clergymen.

(The video doesn’t really show anything like that. It could be a pizza delivery to a church or a police station. But I accept that its probably what the headline says if I can accept any of the other news items of 2016)

12. Switzerland ‘made secret deal with PLO’ after bomb attacks

(Pretty sure all Western nations have made similar arrangements with one muslim group or another in exchange for ‘being eaten last’ as the expression goes. Its nice think to use to rebuke Swiss ‘neutrality’ though)

Controversy is growing in Switzerland over an alleged secret deal, made almost 50 years ago, between the Swiss government and the Palestine Liberation Organisation (PLO).

The agreement, detailed in a new book, was apparently designed to prevent terrorist attacks on Swiss territory.

In return, Switzerland would offer diplomatic support to the PLO.

It followed a series of attacks in 1969 and 1970 by Palestinian groups that caused huge concern in Switzerland.

13. Free Speech won the day in Canada but at a heavy cost. Rebel Media

Thank you M., Buck, Richard, Maria J., Gates of Vienna, Nash Montana, Wrath of Khan, and all who sent in materials. More to come and a few things in the pipe.
One of my favorite human beings of all time, former Czech PM Vaclav Klaus, made a rather blunt statement today in Germany about the state of Europe. We are translating for titles now. Should be ready soon.