But you must sell the meat to another village

A provocative online anti Islamisation campaigner has distributed and put up stickers mocking the Islamic State terror group in East London, an area with one of the largest Muslim populations in Europe.

The stickers are designed to look like the infamous Islamic State (IS) black flag, but in the place of the usual Arabic inscription are the partially concealed works “we fuck goats” in English. Below that is an image of two jihadists engaging in bestiality with a goat. At first glance, however, the image also appears to be an Arabic inscription.

3. Indian FM in Jerusalem: Ties with Israel of ‘highest importance’ to India

India attaches “the highest importance” to the full development of ties with Israel, External Affairs Minister Sushma Swaraj said Monday, adding that there was room for more growth in the rapidly developing bilateral relations.

Swaraj, on the second day of a three-day visit to Israel and the Palestinian Authority, said at a press opportunity before meeting Prime Minister Benjamin Netanyahu that, “Our bilateral cooperation has developed well in a number of areas over the past two decades, but the potential of our relations is much more.”

Sarwaj, who visited Israel once before she became foreign minister in 2014, is only the third Indian foreign minister to visit the country, and the first since 2012. Her visit is seen as an indication of the flowering of ties between the two countries and as a precursor to an expected visit by Indian Prime Minister Narendra Modi. This would be the first-ever visit to Israel by an Indian prime minister.

Greece has seen 21 times more migrants arrive on its shores so far this month than in all of January 2015, the International Organization for Migration said Tuesday.

Since the beginning of 2016, IOM said 31,244 migrants and refugees had arrived in Greece by sea, compared with just 1,472 recorded arrivals on the Greek islands in January last year.

“This is a huge jump,” spokesman Itayi Viriri told reporters in Geneva, warning that it does not bode well for the rest of the year.

“If the trend as it is now continues then certainly we’re looking at another record number,” he cautioned.

Greece’s head of state has described the situation in which Turkish border authorities aid smugglers as “a type of slave trade.” He met with his German counterpart to discuss ways to curb the influx of migrants.

Ahead of a meeting with German President Joachim Gauch, Greece’s president, Prokopis Pavlopoulos, on Monday accused neighboring country Turkey of aggravating the refugee crisis, which has overwhelmed authorities in both Greece and Germany.

“I have a strong fear that Turkish smugglers have the support of the authorities, in particular, border authorities who act like they have seen nothing,” Pavlopoulos told German newspaper “Süddeutsche Zeitung.”

“There are even cases where the smugglers are helped. We have evidence. It’s a type of slave trade,” the president said, adding that he was not speaking about the country’s leaders, in an apparent reference to Turkey’s president, Recep Tayyep Erdogan.

6. ‘We are ready to blow up these cities in the name of Allah’: Threatening letter warns of impending attacks on Bali

Balinese cities could soon be targeted by the same terrorists responsible for the Jakarta blasts outside the Sarinah shopping mall in Indonesia’s capital last week, according to reports.

Indonesian police are investigating a threatening letter that was delivered to a local government office in the Balinese regency of Buleleng at 9am on Tuesday.

The letter warns that the terror network is ‘ready to blow up these cities in the name of Allah’, according to Fairfax Media. 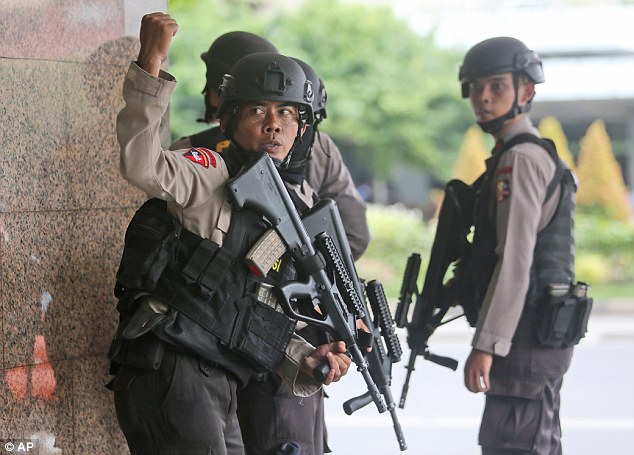 8. Turkey threatens the EU over delaying the delivery of the refugee aid

Turkish daily, Daily Sabah, said that the Turkish Minister stressed that “If you [the EU and the international community in general] do not extend your hand to the refugees in Turkey or do not cooperate with Turkey, these people will come to you.”

Cavusoglu made the remarks during a visit to one of the refugee camps in southeastern Gaziantep province’s Nizip district. Then the Minister said: “Everyone knows what Syrians and Iraqis need. Everyone knows the opportunities that Turkey provided for them but they [international community] remain distant.”

(Once again proving that the sharia is more pernicious than just the ‘hudud’, brutal corporal punishments, but is a war on reason itself. On Greek thought. It must must must be fought)

A Pakistani boy who cut off his own hand, believing he had committed blasphemy, says he does not regret his action.

The 15-year-old raised his hand by accident when a cleric asked worshippers who did not believe in the teachings of the Holy Prophet to identify themselves.

Admirers praising the boy’s “devotional” act have travelled to his village to meet him, but his cleric has been arrested under anti-terrorism laws.

BBC Urdu’s Iram Abbasi is the first international broadcaster to speak to the boy.

10. The following analysis of Islamic State strategies has validity, and certainly is worthy of addition to one’s own understanding. But it is not a stand alone analysis that yields a model with solutions. It is berift of the fact of Islamic thought, history etc. which must be understood. A good source for that remains Pakistani General Malek’s book, the Koranic Concept of War, and the various Stephen Coughlin briefs such as the Red Pill Brief.

11. Muslims FORCE NYPD to Purge Docs on Terrorists Inside U.S.

(Free Beacon) – The New York Police Department has been directed by a U.S. court to remove from its online records an investigation pertaining to the rise of Islamic extremists in the West and the threats these individuals pose to American safety, according to legal documents.

As part of a settlement agreement reached earlier this month with Muslim community advocates in U.S. District Court, the NYPD will purge from its website an extensive report that experts say has been critical to the department’s understanding of radical Islam and its efforts to police the threat.

The court settlement also stipulates that the NYPD make a concerted effort to mitigate the impact of future terror investigations on certain religious and political groups, according to a copy of the court documents published by the American Civil Liberties Union, which has spearheaded the case since June 2013.

Legal experts and critics of the settlement maintain that it could hamper future terrorism investigations and view it as part of a larger campaign by Muslim advocacy organizations in the United States to dismantle surveillance programs encompassing that community.

(This link seems to format better)

(Could this be a direct result of the CVE?)

12.  Britain First is preparing a march in a rather heavily enriched, (dangerous and hostile) and diverse (uniformly islamic and non-white) march. Here is the promo

Thank you Wrath of Khan, M., Buck, Richard and many more.

Various video projects for the counter-jihad as well as organizational tasks are taking up a certain amount of time today. Please check the daily links post comments to get the full spectrum of contributed news links by our very thoughtful and discerning readers.